The United States on Friday intensified its push to drive Venezuelan President Nicolas Maduro from power, as U.S. diplomats left the embassy in Caracas, while Russia vowed to back its socialist South American ally.

U.S. Secretary of State Mike Pompeo is set to brief the United Nations Security Council on Saturday and urge members to recognize opposition leader Juan Guaido as the oil-rich nation’s legitimate head of state, the U.S. State Department said in a statement.

The meeting of the 15-member council was requested by the United States after Washington and a string of countries in the region said they recognized Guaido, the leader of Venezuela’s National Assembly, as head of state and urged Maduro to step down.

Private military contractors who do secret missions for Russia have flown into Venezuela in the past few days to beef up security for Maduro, who has been in power since 2013, sources said.

Earlier, American diplomats left the U.S. embassy in Caracas in a convoy of sport utility vehicles and with a police escort en route to the airport, according to a Reuters witness. Their departure came after Maduro broke off relations with Washington and ordered the U.S. personnel out.

A video circulating on social media showed the same caravan leaving the embassy, a fortified compound overlooking the center of the Venezuelan capital.

The State Department has ordered some U.S. government workers to leave Venezuela and said U.S. citizens there should consider leaving as well.

It did not immediately respond to a request for comment on the movement of embassy personnel on Friday.

U.N. human rights boss Michelle Bachelet called on Friday for an independent investigation into alleged excessive use of force by Venezuelan security forces or allied militia, citing reports of at least 20 people killed this week.

Guaido, who has galvanized Venezuela’s opposition, proclaimed himself interim president on Wednesday. He is considering making a request for funds from international institutions including the International Monetary Fund, two sources said on Friday.

However, he still has no control over the Venezuelan state and the military, which appears to still be loyal to Maduro despite a deep economic and political crisis.

Most Latin American nations have swiftly joined the United States in supporting Guaido’s claim on the presidency, although Mexico’s new leftist government has said it would not take sides. Mexican President Andres Manuel Lopez Obrador said on Friday his administration would be willing to mediate.

Maduro, in a fiery speech on Wednesday, said he was cutting off diplomatic relations with the United States for instigating a “coup” against him. U.S. President Donald Trump’s administration said its relations would be with Guaido.

To ratchet up pressure on Maduro, who began a second term on Jan. 10 following an election last year widely considered to be a fraud, the United States is seeking to cut off funds for his government, U.S. officials said on Thursday.

Both Guaido, who has not appeared in public since mass anti-government protests on Wednesday, and Maduro were scheduled to hold news conferences on Friday.

In an interview with broadcaster Univision on Thursday, Guaido described the recent events as “the beginning of the end” for Maduro, who has presided over Venezuela’s worst ever economic crisis. Guaido said he would work to guarantee humanitarian aid and take new measures to pressure Maduro.

Oil prices edged higher on Friday as the political turmoil threatened to tighten the global supply of crude. Washington has signalled that it could impose new sanctions on Venezuela’s vital oil sector.

“Our challenge is to secure free elections, and we want them as soon as possible. But we are living in a dictatorship,” Guaido said from an undisclosed location. 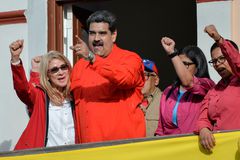 Analysis
Venezuelans, with two presidents, on edge waiting for a decisive move from the military
January 24, 2019 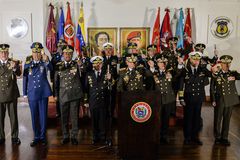 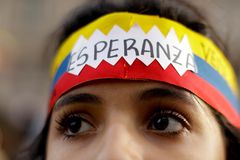