The U.N. chief’s annual report to the Security Council on Children and Armed Conflict released Monday removed the coalition from a relatively new list of government forces and armed groups “that have put in place measures … aimed at improving the protection of children,” despite his finding that the coalition was responsible for the killing and maiming of 222 children last year including 171 from air strikes.

The Saudi-led, U.S.-backed coalition supporting Yemen’s internationally recognized government is battling Houthi Shiite rebels and their allies. The Houthis have held Yemen’s capital, Sanaa, since September 2014, and their advance across the Arab world’s poorest country brought the Saudi-led coalition into the war in March 2015.

The report was issued as Houthi rebels reported that an air strike from the Saudi-led coalition struck a vehicle carrying civilians in northern Yemen on Monday, killing 13 people, including four children.

Virginia Gamba, the U.N. special representative for children in armed conflict, told a news conference launching the report that the secretary-general made the decision to remove the Saudis from the “blacklist” following “the sustained, significant decrease in killing and maiming due to air strikes.”

Gamba noted that about five years ago there were about 1,700 child casualties in Yemen due to air strikes, compared to 171 deaths and injuries last year, from air strikes. She stressed that with casualties continuing, U.N. monitoring of a memorandum with the Saudis on ending child deaths and injuries will continue, and failure to implement it could put Saudi Arabia back on the list next year.

Jo Becker, Human Rights Watch’s children’s rights advocacy director, accused the secretary-general of adding a new level of shame to his ‘list of shame’ by removing the Saudi-led coalition and ignoring the U.N.’s own evidence of continued grave violations against children.”

Adrianne Lapar, director of Watchlist on Children and Armed Conflict, an international advocacy group, said that by removing the Saudi-led coalition, which also includes the United Arab Emirates, “the secretary-general sends the message that powerful actors can get away with killing children.”

She called for an independent and transparent assessment of the process of delisting the coalition, “to ensure that all violators are held to the same standard, no matter who they or their friends are.” Gamba replied in response to a question on whether Saudi Arabia offered the U.N. any incentives to get off the list, “absolutely not.”

In 2016, then secretary-general Ban Ki-moon removed the Saudi-led coalition from the “blacklist” of government forces that committed grave violations against children the previous year following a vehement protest from Saudi Arabia. Guterres added a new list of government forces and armed groups that have taken measures to improve the situation of children in 2017, which the Saudis were put on.

The Houthis remain on the U.N. “list of shame” for failing to put in place measures to improve the protection of children though secretary-general Guterres said in the report that he is encouraged by ongoing U.N. talks with the rebel group “to end and prevent violations for which they are listed.”

The U.N. report also took Myanmar’s military known as the Tatmadaw off the blacklist for recruiting and using children though it remains on the list for killing and maiming youngsters and for acts of sexual violence.

According to the report, eight boys were recruited by the Tatmadaw in 2019 and the military also used 197 children in a variety of jobs including maintaining camps, carrying bricks and harvesting rice. By removing Myanmar’s forces for using children the Watchlist’s Lapar said “the secretary-general is downplaying the severity of these practices and leaving children exposed to harm.”

In Syria, the report says 1,454 children were killed or maimed by parties to the conflict in 2019.

The blacklist includes Syrian government forces and anti-government groups, but Human Rights Watch and the Watchlist criticized the U.N. chief for omitting Russian forces which have been supporting the Syrian government since 2015.

In Afghanistan, the rights groups criticized the secretary-general for attributing 610 child casualties to government forces and 248 deaths and injuries to “international military forces” without naming the United States. Human Rights Watch noted that the U.S. is the only non-Afghan party involved in the conflict, and neither Afghan or U.S. forces are on the blacklist.

Human Rights Watch and the Watchlist also criticized the secretary-general for leaving Israel off the blacklist despite being responsible for 1,525 casualties of Palestinian children last year including 29 deaths.

More broadly, secretary-general Guterres said the U.N. verified over 25,000 “grave violations” against boys and girls in 2019, more than half by armed groups. He said this was similar to the number reported in 2018, averaging about 70 violations per day.

Overwhelmingly, it said, non-government groups were responsible, notably in Yemen, Mali, Central African Republic and Syria but also in Gaza where some 2,127 children were delayed or denied access to specialized medical care outside the Israeli-controlled territory.

Afghanistan remained the deadliest country for children, “with a 67 per cent increase in suicide and complex attacks affecting children, outweighing the decrease in casualties from aerial attacks, Guterres said.

UN warns programs to fight coronavirus in Yemen might have to stop by end of June
June 3, 2020 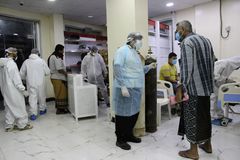 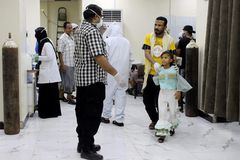