In a legal victory for Kyiv, the United Nations’ highest court ruled Friday that it has jurisdiction in a case brought by Ukraine alleging that Russia breached treaties on terrorist financing and racial discrimination in eastern Ukraine and Crimea.

The decision by the International Court of Justice means the case, which opened a new legal front in the strained relationship between Russia and Ukraine, will go ahead.

It likely will take many months or years to settle.

Ukraine’s deputy minister for foreign affairs, Olena Zerkal, flashed a victory sign as she walked out of the court to speak to reporters.

“I think this is a victory for the rule of law because we’ve received a great result,” she said.

“Russia will be accountable, and will have to present their opinions and their views and could not avoid accountability for all violations,” Ms. Zerkal added.

Friday’s ruling was limited to the issue of jurisdiction and did not address the merits of Ukraine’s complaints in the case, which related to Russia arming rebels in Eastern Ukraine, and reining in the rights of ethnic Tartars and other minorities after its annexation of Crimea.

Kyiv went to the court in January, 2017, asking judges to order Moscow to stop financing the rebels and to pay compensation for attacks, including the downing of Malaysia Airlines Flight 17, which was shot out of the sky over Eastern Ukraine on July 19, 2014, killing all 298 passengers and crew on board.

Russia has always denied involvement in the downing of the passenger jet, but an international investigation has charged three Russians and a Ukrainian with murder over their alleged role in the deadly missile strike.

Ms. Zerkal said Friday’s ruling means that details of the MH17 case will now be aired during Ukraine’s case, although it is not a criminal prosecution.

She said Russia had vetoed an international tribunal to prosecute those responsible for the MH17 downing, but “this court will hear this case, and it might be that it will have an influence on the Russian position in the security council and that we will achieve the justice.”

Ukraine also asked the court to order Russia to stop discriminating against ethnic Tartars on the Crimean Peninsula.

At hearings in June, Russia argued that Ukraine was using the two treaties as a way of bringing broader arguments about the annexation of Crimea and the conflict in eastern Ukraine before the world court.

Lawyers for Moscow insisted that the court had no jurisdiction and should throw out the case.

In a preliminary ruling in 2017, the court ordered Russia to stop limiting “the ability of the Crimean Tatar community to conserve its representative institutions.”

However, in the same ruling, judges rejected Ukraine’s request for measures aimed at blocking Russian support for rebels in eastern Ukraine, saying Kyiv did not provide enough evidence to back up its claim that Moscow sponsored terrorism by funding and arming the rebels.

The case is going ahead as Ukrainian President Volodymyr Zelensky is attempting to put an end to the conflict in the east of his country that has killed more than 13,000 people and displaced more than a million.

Rulings by the court, the United Nations’ principal judicial organ, are final and binding on states. 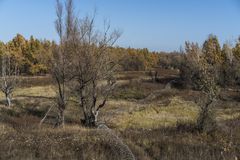