The UN’s special representative for Libya said he hopes ceasefire talks that began Tuesday between the country’s warring sides will result in a deal that will convince foreign powers to stop pouring in weapons.

Ghassan Salame, head of the United Nations support mission in Libya, lamented that an arms embargo has been “incessantly” violated since the fall of long-time autocrat Moammar Gadhafi in 2011. He said an international conference in Berlin last month sought to renew respect for it.

Ceasefire talks in Geneva focus on the military aspect of diplomatic efforts aimed at easing tensions in a country that has been roiled by instability for most of the last decade. Salame said an “economic track” to the talks began in Tunis, Tunisia last month and is to resume in Cairo on Sunday. A political track is set to get under way in about two weeks, he said.

The weak UN-recognized administration holds the capital Tripoli and parts of the country’s west. Led by Prime Minister Fayez Sarraj, it’s backed by Turkey and to a lesser degree Qatar and Italy.

On the other side of the civil war is Gen. Khalifa Hifter, based in the country’s east. His forces have been fighting to capture the capital for months, and are backed by the United Arab Emirates and Egypt as well as France and Russia.

Sarraj and Hifter have each named five members of a military committee to represent them at the Geneva talks aimed at a more permanent ceasefire, in meetings that quietly got underway Monday.

Playing down expectations, Salame said such a meeting between high-ranking officers was unprecedented: “So don’t expect from one meeting yesterday afternoon to settle all these issues.”

Speaking in Arabic through a translator, he noted a “genuine will for both parties to sit together and start negotiations.”

“We started yesterday with a long list of points on our agenda, starting on an attempt to transform the truce into a more solid one less often violated by either side – but also to transform that truce into areas of agreement on a lasting ceasefire,” he said.

Salame said talks would centre on how to organize a ceasefire on the ground, what kind of monitoring could take place, and what could be done with heavy weaponry, among other things.

“There are violations of the truce. But it was accepted publicly by the two sides, and we want these rules to be implemented,” he said, alluding to a ceasefire deal struck last month. “We want to maintain it. We think it’s a very positive development.”

“If we come to a lasting ceasefire … at least the parties in Libya will not need more weapons or more fighters,” Salame said. “If these talks succeed, at least the pull factor will disappear. Because with the violation of the arms embargo, there is a push factor and a pull factor.”

“If you agree on a lasting ceasefire, the pull factor will certainly weaken,” Salame said, pointing to “more than 20 million pieces of weapons in the country and that is enough. The country doesn’t need more.”

He reiterated his comments to the UN Security Council last month citing “new evidence” about new equipment and foreign fighters joining the two sides: “Therefore we believe that the arms embargo is being violated by both parties.”

Salame also noted that a blockade by tribes loyal to Hifter has slowed Libya’s oil output to a trickle.

“I call on countries to support the UN attempts to resume production,” he said. “Production has been hit severely. In fact, now Libya is only producing offshore, which is 72,000 barrels a day compared to 1.3 million barrels a day before the closure.”

The country’s National Oil Corporation, which dominates Libya’s critical oil industry, said losses from the closures have reached more than $930-million in the past two weeks. It put the daily losses at nearly $55-million.

The daily oil production has since the closure fallen to 187,337 barrels a day, the NOC said, the lowest since the 2011 uprising.

Salame called the situation “not sustainable” and said he “would be grateful if some of the largest countries in the world, who have been helping us in solving previous crises in oil production and exports, do the same for this particular crisis.” He did not elaborate.

Just hours after Salame’s news conference, the ceasefire appeared to further fray. Hifter’s self-styled army launched air strikes on militia convoys south of Misrata, a stronghold of fighters loyal to the UN-backed government, according to a Facebook page run by Hifter’s forces. 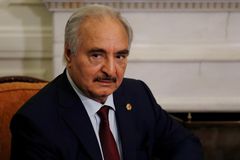 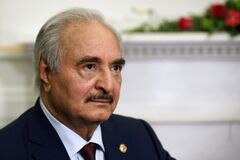 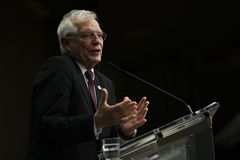