A member of the U.N. Independent International Fact-Finding Mission on Myanmar warned Friday that there will be no long-term peace in the country and no return of Rohingya refugees unless there is accountability for the “brutality” of Myanmar’s military forces.

Radhika Coomaraswamy, a Sri Lankan lawyer who is one of the mission’s three international experts, told an informal Security Council meeting on accountability in Myanmar that the commission believes a domestic judicial process is not possible at this time.

“There’s danger to the victims and witnesses, as they have been threatened,” she said, “and we feel that the Commission of Inquiry sent up by the Myanmar government may face the same challenge.”

Coomeraswamy pointed to the release of seven soldiers sentenced to up to 10 years in prison with hard labour for the killings of 10 Rohingya villagers after just nine months “because of the national and political pressure.” The arrests followed an investigation by two Reuters journalists who were imprisoned for their reporting on the killings.

“Pressure by military and political forces will not only frighten away witnesses, but they will not allow a domestic, and we think even at this time, a hybrid form of accountability to take place,” she said. “We therefore need an international mechanism or process.”

Coomaraswamy cited a number of options: a Security Council referral to the International Criminal Court, establishing an ad-hoc tribunal on Myanmar or having countries with universal jurisdiction use it to deal with the plight of the Rohingya Muslims who fled military crackdowns to Bangladesh.

In parallel, she said that through the Genocide Convention a demand can be made to the International Court of Justice for compensation and reparations to the Rohingyas.

“It is our fervent belief there will be no meaningful return of the Rohingya population, not sustainable and secure development in any of the ethnic regions of Myanmar, and no long-term peace, unless there is accountability and transformation of the Burmese military,” Coomaraswamy said, using the country’s former name Burma.

More than 700,000 Rohingya fled across the border to Bangladesh after Myanmar’s military began a harsh counter-insurgency campaign against them two years ago, a campaign that involved mass rapes, killings and the burning of homes. The U.N. commission has recommended top generals be prosecuted over the crackdown and that governments and companies stop supporting the military-owned conglomerates and businesses that finance its operations.

Rohingya Muslims have long demanded that Myanmar give them citizenship, safety and their own land and homes they left behind. The Buddhist-majority nation has refused to recognize Rohingya as citizens or even as one of its ethnic groups, rendering them stateless, and they also face other forms of state-sanctioned discrimination.

Myanmar’s government and military have consistently denied carrying out human rights violations, and said its military operations in Rakhine were justified in response to attacks by Rohingya insurgents.

Wakar Uddin, a Rohingya born in northern Rakhine state who came to the U.S. for graduate studies, told the council that accountability “is a central issue to the Rohingya crisis as of now.”

“We believe if accountability is not addressed, we are not seeing any light at the end of the tunnel,” he said. “This crisis will linger.”

Uddin, now a professor of microbiology at Pennsylvania State University and director general of the Arakan Rohingya Union, said there are two governments in Myanmar, one military which has “overwhelmingly” created the Rohingya problem, and the other civilian.

He said the military “need to take their hands off” the Rohingya issue because otherwise his people will continue to suffer.

Getting the Security Council to refer Myanmar to the ICC is unlikely because veto-wielding members China and Russia view the Rohingya issue as something to be dealt with between Myanmar and Bangladesh.

Germany’s deputy U.N. ambassador Juergen Schulz, who chaired the meeting which was also co-sponsored by Peru and Kuwait, said Myanmar’s ambassador sent a letter saying he wouldn’t attend because Myanmar didn’t agree with the title and the briefers. He said Myanmar’s commission investigating the Rohingya issue also declined an invitation to attend. 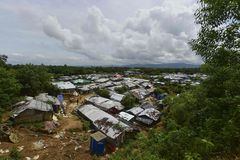 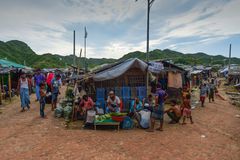 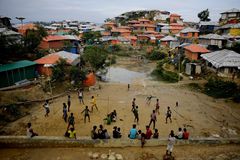