The United Nations and Pakistan issued an appeal Tuesday for US$160-million in emergency funding to help millions affected by record-breaking floods that have killed more than 1,160 people since mid-June.

UN Secretary-General Antonio Guterres said Pakistan’s flooding, caused by weeks of unprecedented monsoon rains, were a signal to the world to step up action against climate change.

“Let’s stop sleepwalking toward the destruction of our planet by climate change,” he said in a video message to an Islamabad ceremony launching the funding appeal. “Today, it’s Pakistan. Tomorrow, it could be your country.”

Mr. Guterres will visit Pakistan on Sept. 9 and meet with flood victims to express solidarity with them, according to a statement released by his office. It said Mr. Guterres will also “witness how we are working, in collaboration with our humanitarian partners, to support the government’s relief efforts and provide assistance to millions of people.”

More than 33 million people, or one in seven Pakistanis, have been affected by the catastrophic flooding, which has devastated a country already trying to revive a struggling economy. More than one million homes have been damaged or destroyed in the past 2½ months, displacing millions of people. Around a half million of those displaced are living in organized camps, while others have had to find their own shelter.

Prime Minister Shahbaz Sharif said the floods badly destroyed crops, and his government was considering importing wheat to avoid any shortage of food.

Mr. Sharif said Pakistan was witnessing the worst flooding in its history and any inadvertent delay by the international community in helping victims “will be devastating for the people of Pakistan.”

He promised funds from the international community would be spent in a transparent manner and that he would ensure all aid reaches those in need. “This is my commitment,” he told reporters, saying his country is “facing the toughest moment of its history.”

Pakistan says it has received aid from some countries, and others were dispatching aid too.

On Tuesday, the U.S. government said it would provide US$30-million in assistance to help victims of the flood. According to a statement released by the U.S. Agency for International Development, this aid will be given to Pakistan through USAID. It said the United States is deeply saddened by the devastating loss of life and livelihoods throughout Pakistan.

According to initial government estimates, the devastation caused US$10-billion in damage to the economy.

“It is a preliminary estimate likely to be far greater,” Planning Minister Ahsan Iqbal told the Associated Press. More than 243 bridges and more than 5,000 kilometres of road have been damaged.

Although rains stopped three days ago, large swaths of the country remain underwater and the main rivers, the Indus and the Swat, are still swollen. The National Disaster Management Authority on Tuesday warned emergency services to be on maximum alert, saying flood waters over the next 24 hours could cause further damage.

Rescuers continued to evacuate stranded people from inundated villages to safer ground. Makeshift tent camps have sprung up along highways.

Meteorologists have warned of more rains in coming weeks. 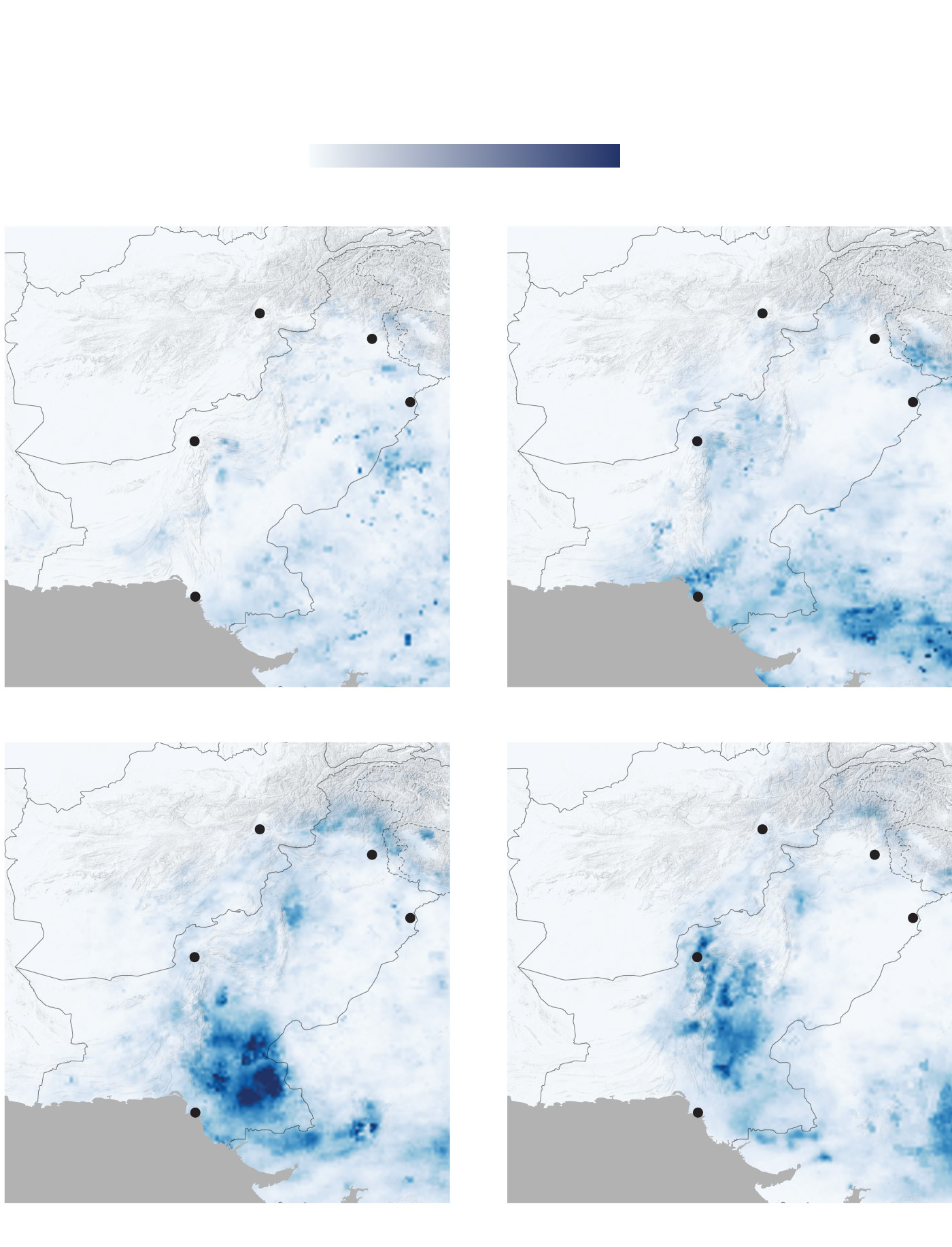 “The situation is likely to deteriorate even further as heavy rains continue over areas already inundated by more than two months of storms and flooding. For us, this is no less than a national emergency,” Pakistani Foreign Minister Bilawal Bhutto-Zardari said Tuesday, urging the international community to give generously to the UN appeal.

“Since mid-June, in fact, Pakistan has been battling one of the most severe, totally anomalous cycles of torrential monsoon weather,” he said. Rainfall during that time was three times the average, and up to six times higher in some areas, he said.

The UN flash appeal for US$160-million will provide food, water, sanitation, health and other forms of aid to some 5.2 million people, Mr. Guterres said.

“The scale of needs is rising like the flood waters. It requires the world’s collective and prioritized attention,” he said.

A day earlier, the International Monetary Fund’s executive board approved the release of a much awaited US$1.17-billion for Pakistan.

The funds are part of a US$6-billion bailout agreed on in 2019. The latest tranche had been on hold since earlier this year, when the IMF expressed concern about Pakistan’s compliance with the deal’s terms under the government of former Prime Minister Imran Khan. Mr. Khan was ousted through a no-confidence vote in the parliament in April.

Pakistan has risked default as its reserves dwindle and inflation has spiralled, and to get the IMF bailout, the government has had to agree to austerity measures.

The flooding catastrophe, however, adds new burdens to the cash-strapped government. It also reflects how poorer countries often pay the price for climate change largely caused by more industrialized nations. Since 1959, Pakistan is responsible for only 0.4 per cent of the world’s historic emissions blamed for climate change. The U.S. is responsible for 21.5 per cent, China for 16.5 per cent and the EU 15 per cent.

Several scientists say the record-breaking flooding has all the hallmarks of being affected by climate change.

“This year, Pakistan has received the highest rainfall in at least three decades,” said Abid Qaiyum Suleri, executive director of the Sustainable Development Policy Institute and a member of Pakistan’s Climate Change Council. “Extreme weather patterns are turning more frequent in the region and Pakistan is not an exception.”

Early estimates put the damage from Pakistan's recent deadly floods at more than $10 billion, its planning minister said on Monday. He also said the world has an obligation to help the South Asian nation cope with the effects of man-made climate change. Jayson Albano reports.