By early afternoon, aid workers on the ground had counted airstrikes on 13 locations and shelling on half a dozen more in Idlib, as well as strikes on two neighboring provinces. There were few accounts of civilian casualties, but heavy damage was reported at two schools.

“We are really at a desperate point not knowing where it’s going again,” Panos Moumtzis, the United Nations official coordinating humanitarian aid for Syria, said in an interview. “We keep on raising the alarm. We’re running out of words to describe what we actually see, what’s happening on the ground, and that’s why there’s a sense of desperation.”

But for the United Nations, which deploys aid workers to help populations hit by the shelling, “today was a lighter day,” he added.

The airstrikes and shelling signified a new phase in hostilities that have killed at least 500 people in Idlib in the past 100 days and have sent more than 400,000 people fleeing for shelter, UN officials say.

Bombs and shells during that period have also struck 39 health facilities and 50 schools and have inflicted hundreds of millions of dollars in damage, Moumtzis said.

The cease-fire agreement signed this month in the Kazakhstan’s capital had produced a flicker of hope. People mused that they would return to their “home rubble” to celebrate Eid al-Adha, the four-day Muslim festival starting Sunday.

But the cease-fire lasted all of three days, and “panic has resumed again,” Moumtzis said, adding that “the message we get from Syrians living there is a message of despair.”

After eight years of war in Syria, more than 3 million people are living in Idlib, the northwestern governorate bordering Turkey and the last major enclave controlled by armed opposition groups, notably Hayat Tahrir al-Sham, an al-Qaida affiliate that the United Nations lists as a terrorist organization.

The militant group’s shelling and rocket fire of government-held areas of neighboring provinces have resulted in civilian casualties and have forced at least 10,500 people to flee their homes in June and July, the United Nations reported.

But for many civilians, Idlib is the last stop after fleeing sieges and offensives targeting Homs, Hama, Aleppo and, last year, the Damascus suburb of Eastern Ghouta. Most have had to flee the fighting four or five times, the United Nations said.

Warring parties are “playing with fire,” Moumtzis said, adding that a major offensive in Idlib risked sending hundreds of thousands of people fleeing toward Turkey and beyond. “The question is: When this military offensive takes place, what is the plan for the 3 million people there? That’s a question we haven’t got an answer for.”

Mark Lowcock, the UN emergency relief coordinator, conveyed that sense of desperation to the Security Council at the end of July in the seventh briefing his office has delivered to world powers in three months.

“You know what is happening, and you have done nothing for 90 days as the carnage continues in front of your eyes,” he said, demanding action to forestall more carnage.

Days earlier, the U.N. human rights chief, Michelle Bachelet, had similarly challenged the international community for seemingly shrugging off the news from Syria and reminded warring parties that intentional attacks on civilians are war crimes.

“Those who have ordered them or carried them out are criminally responsible for their actions,” she said.

Those protests have drawn little reaction. The cease-fire collapsed because the jihadi groups controlling Idlib had begun attacks on government-held territory and on Russia’s air base at Hmeimim, Russia’s ambassador to the United Nations in Geneva, Gennady Gatilov, told reporters in a rare briefing Friday. “Syrian forces had to retaliate,” he said.

Moreover, Gatilov said, information from humanitarian organizations included a lot of “fake data.” When Russian military experts examined many of the coordinates the United Nations provided of casualties and facilities supposedly hit by airstrikes and shelling, they did not check out, he said, adding, “They should double check the information they receive.”

Moumtzis responded to the skepticism, saying, “Five hundred people didn’t die on their own; 400,000 people didn’t run away for no reason.”

The United Nations said it had cited only episodes verified from multiple sources and had drawn on satellite imagery and date-stamped photographs. Satellite pictures showed 17 villages almost destroyed in the past three months, Lowcock told the Security Council.

Gatilov, who previously served as Russia’s deputy foreign minister, said he believed that Geir Pedersen, the UN mediator trying to broker talks on a political solution in Syria, was close to clinching an agreement on setting up a constitutional council.

He called it “significant progress” toward finding a political solution to the eight-year conflict.

In the meantime, Gatilov said, “this fight will continue.” 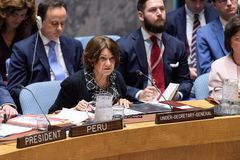 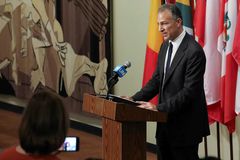