One of every three people in Venezuela is struggling to put enough food on the table to meet minimum nutrition requirements as the nation’s severe economic contraction and political upheaval persists, according to a study published Sunday by the U.N. World Food Program.

A nationwide survey based on data from 8,375 questionnaires reveals a startling picture of the large number of Venezuelans surviving off a diet consisting largely of tubers and beans as hyperinflation renders many salaries worthless.

A total of 9.3 million people – roughly one-third of the population – are moderately or severely food insecure, said the World Food Program’s study, which was conducted at the invitation of the Venezuelan government. Food insecurity is defined as an individual being unable to meet basic dietary needs.

The study describes food insecurity as a nationwide concern, though certain states like Delta Amacuro, Amazonas and Falcon had especially high levels. Even in more prosperous regions, one in five people are estimated to be food insecure.

“The reality of this report shows the gravity of the social, economic and political crisis in our country,” said Miguel Pizarro, a Venezuelan opposition leader.

Venezuelan President Nicolás Maduro has been largely reluctant in recent years to invite international organizations to provide assessments of the nation’s humanitarian ordeal, though the World Food Program said it was granted “full independence” and collected data throughout the country “without any impediment or obstruction.”

“WFP looks forward to a continuation of its dialogue with the Venezuelan government and discussions that will focus on the way forward to provide assistance for those who are food insecure,” the agency said in a statement.

There was no immediate response to the findings by Maduro’s government.

The survey found that 74% of families have adopted “food-related coping strategies,” such as reducing the variety and quality of food they eat. Sixty per cent of households reported cutting portion sizes in meals, 33% said they had accepted food as payment for work and 20% reported selling family assets to cover basic needs.

The issue appears to be one that is less about the availability of food and more about the difficulty in obtaining it. Seven in 10 reported that food could always be found but said it is difficult to purchase because of high prices. Thirty-seven per cent reported they had lost their job or business as a result of Venezuela’s severe economic contraction.

Venezuela has been in the throes of a political and humanitarian crisis that has led over 4.5 million people to flee in recent years. Maduro has managed to keep his grip on power despite a push by opposition leader Juan Guaidó to remove him from office and mounting U.S. sanctions.

Maduro frequently blames the Trump administration for his nation’s woes, and his government has urged the International Criminal Court to open an investigation, alleging that the financial sanctions are causing suffering and even death. The nation’s struggles to feed citizens and provide adequate medical care predate U.S. sanctions on the Venezuelan government.

Noting that the survey was done in July through September, Carolina Fernández, a Venezuelan rights advocate who works with vulnerable women, said she believes the situation has deteriorated even more. While it was once possible for many families to survive off remittances sent by relatives abroad, she said, that has become more difficult as much of the economy is dollarized and prices rise.

“Now it’s not enough to have one person living abroad,” she said.

Fernández said food insecurity is likely to have an enduring impact on a generation of young Venezuelans going hungry during formative years.

“We’re talking about children who are going to have long-term problems because they’re not eating adequately,” she said.

Those who are going hungry include people like Yonni Gutiérrez, 56, who was standing outside a restaurant that sells roasted chickens in Caracas on Sunday.

The unemployed man approached the restaurant’s front door whenever a customer left with a bag of food, hoping they might share something. He said he previously had been able to scrape by helping unload trucks at a market, but the business that employed him closed.

“Sometimes, with a little luck, I get something good,” he said of his restaurant stakeout. 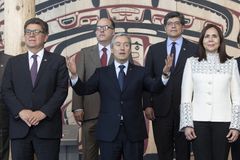 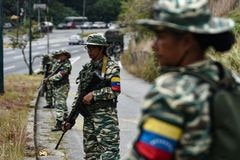 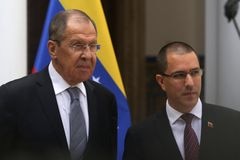