Adnan Afrin of the Syrian Democratic Forces said the grave unearthed a few days ago outside the village of Baghouz contains the remains of men and women but said the number of bodies and their identities remain unclear.

“Investigation is still underway to determine their nationality and the manner of killing,” said Afrin, adding they were looking into reports that they may be Yazidis or ISIS fighters.

A Furat FM TV station executive, Salah Youssef, said those in the mass grave appear to have been shot in the head. He said authorities are investigating whether the bodies are those of women and children who had refused to stay under ISIS rule and were shot as they tried to escape, or belonged to ISIS fighters who were killed during battles with the SDF. Youssef said there are reports of more than one mass grave.

The Kurdish-led SDF has been locked in a standoff with a few hundred ISIS militants holed up in Baghouz with civilians. The militants are besieged in a small sliver of land along the Euphrates River with dwindling food and medicine, and many of them have so far refused to surrender.

Thousands of civilians, many of them women and children, have evacuated the area in the past few weeks on foot, many saying they had paid smugglers to get out.

But for the past week, trucks have brought out in intermittent batches hundreds of civilians, mostly members of ISIS families and wounded men, in an organized evacuation amid a truce in the fighting.

The SDF said the presence of civilians and hostages among the ISIS fighters has delayed a final military push by the SDF to uproot the militants from their last corner in Syria – the final redoubt of the militants’ self-proclaimed caliphate that once stretched across much of the country and neighbouring Iraq. Hundreds, if not thousands, are still believed to be holed up in Baghouz. They include militants and their family members and other civilians who are among the group’s most determined supporters, many of whom travelled to Syria from all over the world. But SDF officials have denied there were negotiations with the militants, some of whom had asked for an exit.

Afrin said his forces managed to free 24 SDF fighters from the extremist group’s hold while evacuating civilians from the area in the past days. The SDF fighters were taken hostage by ISIS during recent fighting.

In a video released by the SDF press office Thursday, the leader of the force Mazloum Kobani is seen meeting with a number of newly released fighters. One of the soldiers said they had spent 22 days in captivity.

Kobani said that “the main reason” military operations against ISIS have stopped is to allow for the liberation of more hostages.

He added that a full victory against ISIS is days away. “They think themselves very strong but it is not like this.”

The fate of a number of foreign hostages and Syrian and Iraqi detainees by ISIS also remains unknown as the group’s territory has shrunk. SDF officials said they are probing whether some of those hostages may still be in the hands of the militants in Baghouz.

In recent days, at least 13 Yazidi children, including two girls, were released from inside the ISIS pocket.

Recapturing Baghouz would mark an end to the militants’ territorial rule, but few believe that will end the threat posed by an organization that still stages and inspires attacks through sleeper cells in both Syria and Iraq and that has active affiliates in Egypt, West Africa and elsewhere.

The group also has a presence online, using social media to recruit new members and promote its attacks.

In Geneva, UN-backed investigators focusing on Syria expressed concerns that Islamic State fighters and their affiliates are being held by U.S. troops and Syrian opposition forces without proper legal protections.

The Independent International Commission of Inquiry on the Syrian Arab Republic presented its findings based on investigations conducted over the past six months saying that in areas under the control of SDF, thousands of women, men and children “continued to be unlawfully interned or detained, some of them held in deplorable conditions in makeshift camps unfit to meet their basic needs.”

The report released in Geneva Thursday said that there is, moreover, a concern that ISIS “terrorists and their affiliates are being held incommunicado by SDF and American forces without adequate judicial guarantees, conditions that are conducive to detainee abuse.”

Officials from the Kurdish-led administration had no immediate comments on the report.

“You have to be worried that those are the types of conditions where people might be put under stress to provide information,” he said. 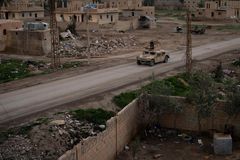 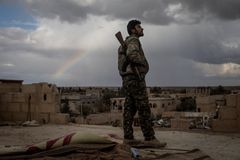