U.S., Israeli and EU officials took a tough line toward Iran on Wednesday, with U.S. officials saying they would consider all options if Tehran failed to revive the 2015 nuclear deal and Israel saying it reserved the right to act.

Iranian President Ebrahim Raisi has so far refused to resume indirect talks with the United States in Vienna on both sides returning to compliance with the deal, under which Iran curbed its nuclear program in return for economic sanctions relief.

“We will look at every option to deal with the challenge posed by Iran,” U.S. Secretary of State Antony Blinken told a joint news conference with Israeli Foreign Minister Yair Lapid and Emirati Foreign Minister Sheikh Abdullah Bin Zayed.

“If the Iranians don’t believe the world is serious about stopping them, they will race to the bomb. Israel reserves the right to act at any given moment in any given way,” Lapid said. Israel has previously bombed nuclear sites in Iraq and Syria.

U.S. officials stressed it was still Washington’s preference for the United States, which abandoned the nuclear deal in 2018 during the Trump administration, and Iran, which began violating its nuclear limits about a year later, to resume compliance.

Iran struck the deal in 2015 with Britain, China, France, Germany, Russia and the United States. The last round of Vienna talks took place in June. Iran, beyond saying they would resume “soon,” has not set a new date.

Iran has long denied any ambition to acquire nuclear weapons.

A Western diplomat said on Wednesday he thought the earliest talks might happen was in late October, if then.

The European Union co-ordinator on Iran, Enrique Mora, plans to visit Tehran on Thursday, a trip diplomats from Britain, France and Germany, a group known as the E3, said came at a critical time as Iran keeps advancing its nuclear program.

“The nuclear situation has worsened continuously and seriously,” said one E3 diplomat, alluding to Iran’s accelerating enrichment of uranium to higher fissile purity, a possible pathway to a nuclear bomb.

“This therefore is from our E3 point of view not a ‘business as usual’ but a visit in (the) context of a deep crisis in the JCPOA,” the diplomat added.

While officials have made similar past statements, taken together the comments suggested a more coercive rhetorical stance toward Tehran if it refused to resume compliance with the deal called the Joint Comprehensive Plan of Action (JCPOA).

Earlier, the U.S. special envoy for Iran, Rob Malley, said Washington was ready to consider “all options” if Iran is unwilling to return to the 2015 deal, which was negotiated under then-President Barack Obama and then-Vice President Joe Biden, who is now the U.S. president.

The phrase “all options,” is typically intended to include the possibility – however remote – of military action.

Some analysts, however, read the comments less as a tougher stance on Iran and more as a reflection of the uncertainty about whether the Raisi government will return to talks and, even if it does, whether it will agree to revive the deal.

The State Department said Malley would travel to the United Arab Emirates, Qatar and Saudi Arabia from Oct. 15-21 to co-ordinate with Gulf allies.

“We will be prepared to adjust to a different reality in which we have to deal with all options to address Iran’s nuclear program if it’s not prepared to come back into the constraints,” Malley said in a virtual appearance at a Washington think tank.

“There is every possibility that Iran will choose a different path, and we need to co-ordinate with Israel and other partners in the region,” he added.

“I will be travelling to Saudi Arabia, UAE and Qatar in just a matter of days to talk about efforts to come back to (JCPOA) and what options we have to control Iran’s nuclear program if we can’t achieve that goal.” 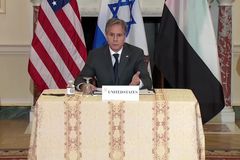