The United States has been quietly reducing its troop strength in Afghanistan despite the lack of a peace deal with the Taliban, weakening its hand in any future negotiations with the insurgents.

American negotiators had tried to use troop reduction as a bargaining chip in their long peace talks with the Taliban, hoping to get some concessions from the insurgent group. President Donald Trump abruptly aborted those talks last month.

The disclosure that the United States has in fact already been pulling back troops in Afghanistan, deal or no deal, came just weeks after Trump stunned allies and adversaries alike by pulling American forces from parts of Syria.

In both cases, critics said Washington was giving up invaluable leverage in negotiations to shape the future of the two countries.

In peace talks with the Taliban aimed at ending the United States’ longest war, American negotiators worked hard to try to convince the insurgents that Washington was truly committed to Afghanistan, and that they should not try to wait out the Americans.

But Trump has had made no secret of his desire to pull the United States out of “endless wars” — and the Taliban know that.

Like much of the world, the insurgents have been closely watching the events in Syria, where the Trump administration allowed Turkey to move against Kurdish fighters who had long been closely allied with U.S. forces.

“The U.S. follows its interests everywhere, and once it doesn’t reach those interests, it leaves the area,” Khairullah Khairkhwa, a senior Taliban negotiator, said in an interview posted on the group’s website recently. “The best example of that is the abandoning of the Kurds in Syria. It’s clear the Kabul administration will face the same fate.”

Miller discussed the troop reductions on Monday at a news conference in Kabul.

Other American and Afghan officials, speaking on the condition of anonymity to discuss details of the plan, said that the eventual force size could drop to as low as 8,600 — roughly the size of an initial reduction envisioned in a draft agreement with the Taliban before Trump halted peace talks last month.

Rather than issuing a formal withdrawal order, they are reducing the force gradually by not replacing troops that cycle out.

A senior Afghan official said the Afghan government had signed off on the reduction. Officials would not discuss other details of the drawdown, including any specific timeline for it.

The confirmation of the troop reduction came as U.S. Defense Secretary Mark T. Esper was making a visit to Afghanistan. Earlier in his visit, Esper had seemed to allude to some potential reduction in U.S. forces, saying that drawing down to 8,600 troops would not affect important counterterrorism operations in Afghanistan.

For months, there has been debate within the Trump administration on meeting the president’s goal of stopping what he has described as open-ended American military entanglements in foreign conflicts. Amid the president’s growing frustration, diplomats negotiating a peace deal in Afghanistan dangled troop reductions before the Taliban, which has long demanded a complete U.S. troop withdrawal.

The decision to reduce American troops even without a deal does not just give the United States less leverage over the ultimate shape of an Afghan government. It is also likely to mean a significant shift away from the U.S. military’s long-standing mission of training the Afghan military as American officials concentrate on counterterrorism operations, officials said.

Reducing the number of troops ahead of a complete departure from the country was always the most important American bargaining chip in any negotiations with the Taliban to end the long war. But from the start, Trump made it abundantly clear that he wanted out of Afghanistan.

At one stage halfway through the yearlong negotiations, Trump stumbled during a Fox News interview, incorrectly saying that the number of American troops in Afghanistan was 9,000, and not the roughly 14,000 it was listed at.

Many, including some Taliban officials taking part in the talks, which were held in Qatar, read Trump’s remarks as confirmation that the American decision to draw down had already been made whether the insurgents offered concessions or not.

American military officials, though wary of leaving Afghanistan altogether, had signed off on the first stages of a troop drawdown in a draft peace agreement that called for called for 5,400 U.S. troops to leave the country over about five months. The measure was put forward to show the Taliban that the Americans would abide by the proposed deal in return for the insurgent group reducing violence in Afghanistan, according to officials taking part in the negotiations.

But the negotiations collapsed in September when Trump pulled the plug on the deal his diplomats had finalized and initialed after a year of negotiations.

American officials have since quietly signaled that they are trying to keep the talks with the Taliban alive. Earlier this month, the chief negotiator for the United States, Zalmay Khalilzad, met informally with Taliban officials in Pakistan.

During Esper’s visit to Afghanistan, he also said a peace agreement was “the best way forward.”

The current process of troop reduction outside of peace talks gives more control over the process to Miller and the government of President Ashraf Ghani, which had criticized the United States for negotiating a troop withdrawal with the insurgents rather than with the country’s elected government.

Last year in January, Ghani, perceiving that Trump urgently wanted to cut costs in Afghanistan, said he would be happy to directly negotiate some degree of troop reductions with the Americans if they would avoid rushing into a bad deal with the Taliban.

Miller had long set out a goal of an 8,600-member troop force as being both a desired level and as the minimum needed to support the Afghan military, according to two defense officials.

Miller, a Special Operations officer by profession, has a reputation for whittling down military units and commands to “trim the fat” and best accomplish their mission. In the last year that he has led the Afghan mission, U.S. troops have focused on seeking out leadership for Afghan forces who can better carry the burden of the war, while the United States can focus its resources in backing them up with air power.

At the height of the war, in 2010 and 2011, more than 100,000 American troops were stationed in Afghanistan, aided by tens of thousands of soldiers from NATO allies in what made up one of the biggest military coalitions in the world.

Now, a further reduction in American forces would mean that the burden of training the Afghan military would fall more heavily on the roughly 8,500 NATO forces and other allies in the country.

It is unclear, however, whether a reduction in American forces might lead to some reconsideration by NATO allies as well. In a recent interview with The New York Times, NATO’s secretary-general, Jens Stoltenberg, would not speculate on any reduction of troops, but added that NATO remains committed to the mission in Afghanistan.

“We have adjusted that many times, and we will always assess exactly the way and the composition of our forces in Afghanistan,” Stoltenberg said.

The plan to shrink the force in Afghanistan comes as much of the world’s attention has been focused on the retreat of American forces from the front line in Syria as Turkish-backed troops advance into the country. And in many ways, the changes in Syria and Afghanistan are linked.

In December, in the aftermath of Trump’s first announcement that American forces would be leaving Syria, he also demanded the withdrawal of 7,000 troops from Afghanistan. Trump’s orders sent the Pentagon and the American command in the Middle East scrambling in an effort to persuade the president otherwise, officials say. 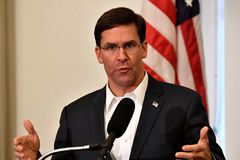 UN report says U.S. air strikes on alleged Taliban drug labs violated international humanitarian law, hit civilians
Subscriber content
October 9, 2019
Report an error
Due to technical reasons, we have temporarily removed commenting from our articles. We hope to have this fixed soon. Thank you for your patience. If you are looking to give feedback on our new site, please send it along to feedback@globeandmail.com. If you want to write a letter to the editor, please forward to letters@globeandmail.com.
Comments