One of three Americans acclaimed as heroes for tackling an alleged Islamic State gunman aboard a Paris-bound train testified Friday that he tried to kill the man who stormed into their passenger car with an arsenal of weapons.

Alek Skarlatos, 28, told a Paris court at the gunman’s trial that he yanked a pistol from the attacker’s hand, turned it on him and pulled the trigger, but the gun did not fire.

“I was honestly trying my best to kill or restrain him,” Skarlatos said, recounting the chaotic Aug. 21, 2015 scene aboard the high-speed Amsterdam to Paris train.

The attack suspect, Ayoub El Khazzani faces a maximum sentence of life in prison if he is convicted of attempted terrorist murder. The 31-year-old Moroccan, who had spent time in Syria, is being tried in a heavily guarded courtroom with three suspected accomplices.

The month-long trial that opened this week could help expose the web that linked the underworld of the Islamic State group and uncover plots to target Europe. The man considered the co-ordinator of the November 2015 massacre outside a stadium and at a music hall and restaurants in Paris that left 130 people dead had travelled with El Khazzani from Syria to Europe, according to investigators.

One of El Khazzani’s co-defendants, Mohamed Bakkali, is also a suspected accomplice in the Paris attacks.

El Khazzani’s defence appears to be trying to show that he did not intend to commit mass slaughter on the train a few months earlier.

He boarded in Brussels, carrying a cache of arms in a suitcase, including a Kalashnikov automatic rife, nine clips with 30 rounds each, a pistol and a cutter.

Skarlatos said that after the foiled attack, he immediately told police about his intention to kill the gunman because he was uncertain about self-defence laws in France. He changed his story after seeking information from the FBI, he said later at a news conference.

Skarlatos’ lawyer stressed that El Khazzani was still a potential danger when his client tried to shoot him.

“We have to add that he did so during the fight and not after the fight, and Mr. Khazzani was still resisting against the three Americans,” lawyer Thibault de Montbrial said.

The recollections in court this week from passengers who disarmed the attacker on the fast train from Amsterdam have highlighted the split-second decisions that prevented what witnesses contend could have become a mass slaughter.

A French-American passenger, Mark Moogalian, was badly wounded by a gunshot to the back that exited his neck. Moogalian was one of two people who initially confronted the gunman as he emerged from a toilet bare-chested and holding the Kalashnikov with a backpack strapped to his front.

The heroics of a handful of passengers inspired Clint Eastwood to direct a Hollywood movie re-enacting the dramatic events: “The 15:17 to Paris.”

Praise has been focused on Skarlatos, Spencer Stone and Anthony Sadler, who grew up together in California and were vacationing.

Moogalian, whose neck was spurting blood, saw the Americans move into action, with Stone diving on the gunman when he entered their train car.

“I was happy because the cavalry had arrived,” Moogalian said in testimony Thursday. He said he is alive today because of Stone, who came to his aid after the gunman was laid low by his choke hold and Skarlatos’ blows to his head with the Kalashnikov.

He “was surprisingly difficult to control,” Skarlatos testified.

Skarlatos and Stone, working in lockstep, were both military men. Stone fell ill upon his arrival in France this week and his testimony was delayed until Monday.

Asked if the situation was more intense than during his duty in Afghanistan, Skarlatos, who at the time of the train attack was a member of the U.S. National Guard, said “much greater.”

“In my mind, we were supposed to die that day,” Skarlatos told the court.

El Khazzani pulled out weapons one after another, Sadler and Skarlatos both said in testimony: when he lost the Kalashnikov, he pulled out a pistol; when he lost that, he had a box cutter in his hand. He dropped the cutter in the struggle but not before injuring Stone on his neck and hand.

With El Khazzani unconscious on the ground, a British businessman, Chris Norman, said he helped tie him up with zip-ties used as makeshift handcuffs and bound his ankles with what he thinks was a pink tie. Then, he said, “I sat on him.”

The train rerouted to Arras, in northern France, where El Khazzani was arrested. 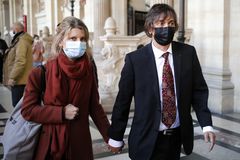 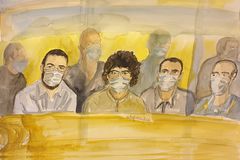