The new balance of power • Winners, losers and toss-ups • Trouble at the polls • Trump’s reaction • What happens now? • Analysis and commentary


The new balance of power

House: All 435 seats in the House of Representatives were up for grabs on Tuesday, with 218 needed to form majority. As of 7 a.m. (ET) Thursday, the Democrats were elected in 223 seats, a gain of 28 seats. Fifteen more seats were still undecided, with a narrow Democratic majority as the likely outcome. Though control of the House would be a significant win, the Republicans didn’t lose as many races as the president’s party usually does in midterms. (In contrast, Republicans gained 63 seats in 2010 when Democrat Barack Obama was president.) 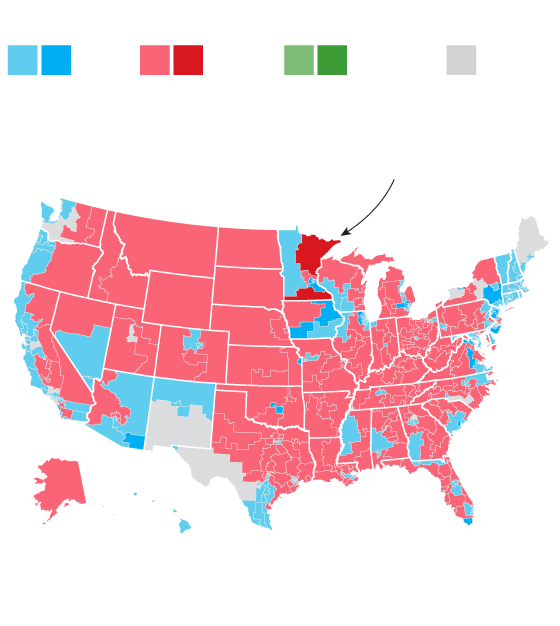 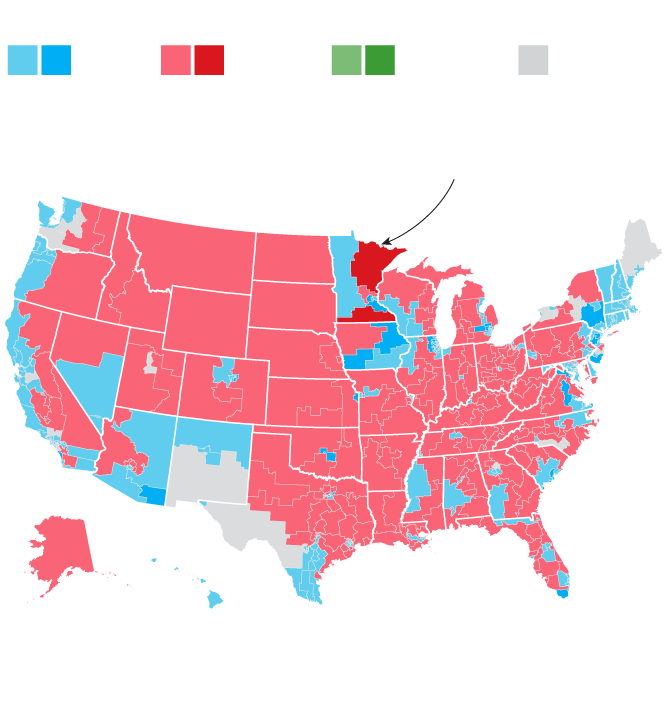 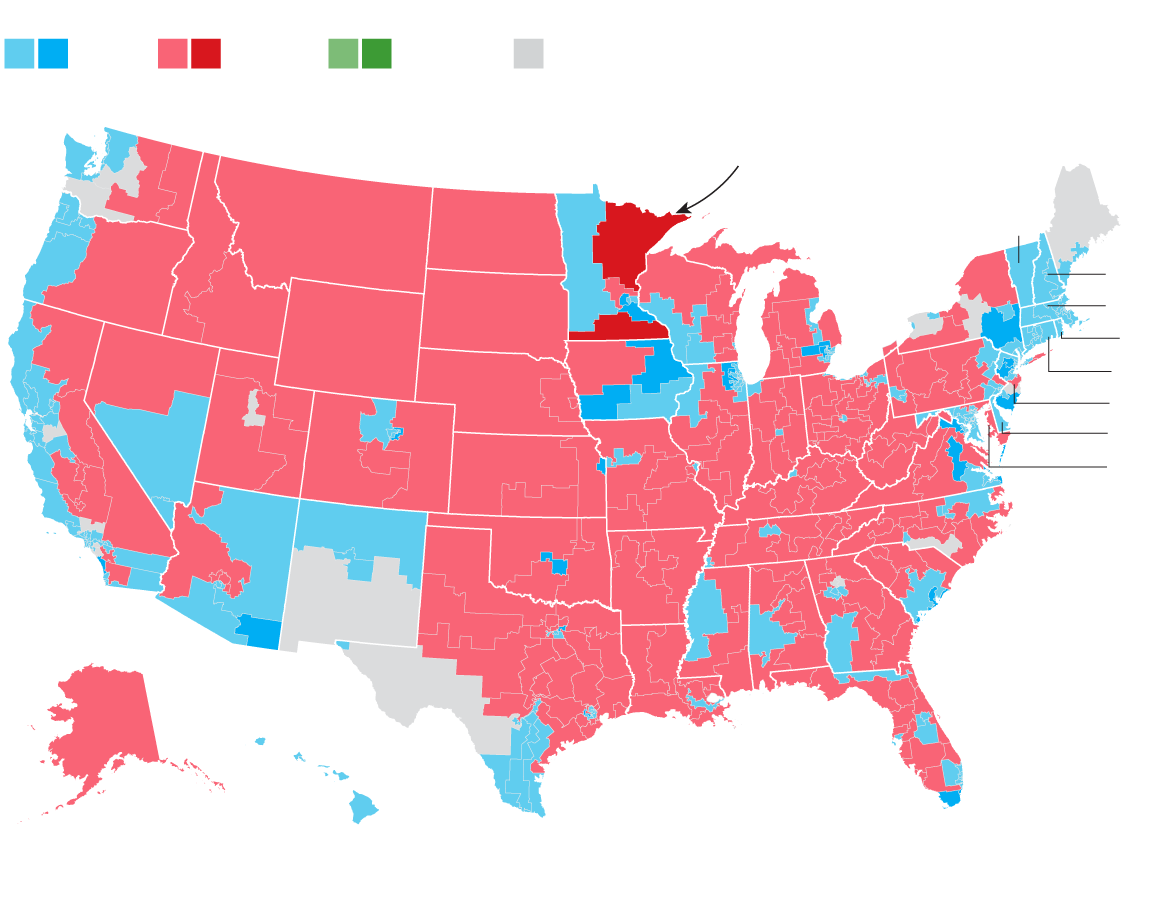 Senate: U.S. senators serve six-year terms, meaning only a third of them are up for grabs in either midterm or presidential election years. This year, the Republicans maintained a narrow advantage, capturing Senate seats in Indiana, Missouri and North Dakota. That’s a better-than-average performance; usually the president’s party loses Senate seats in midterms. 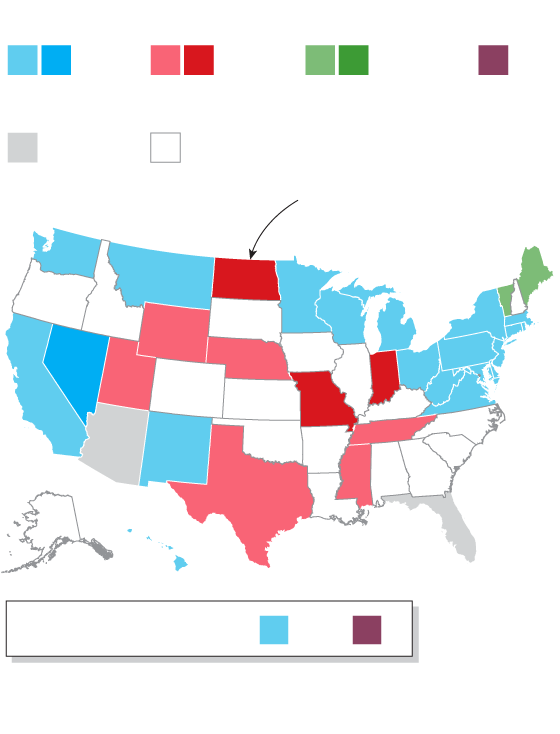 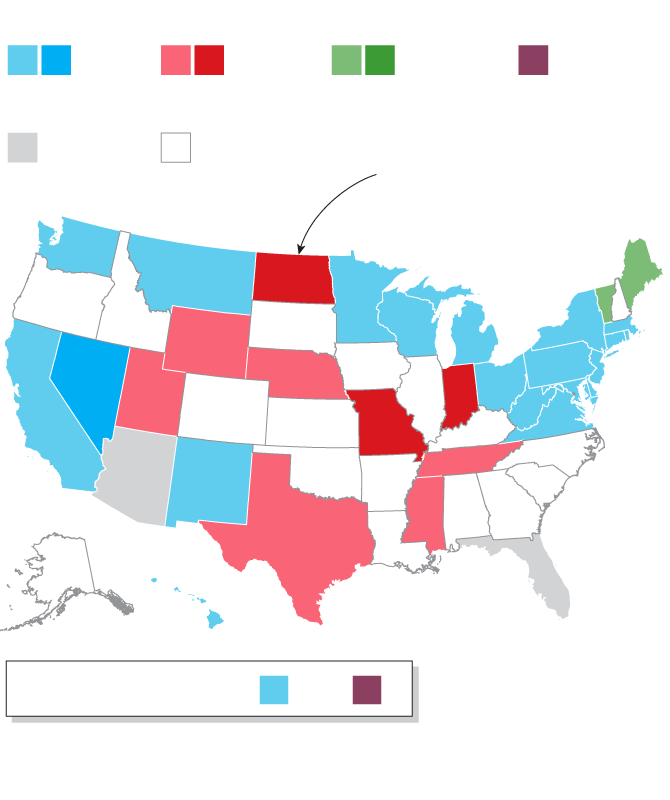 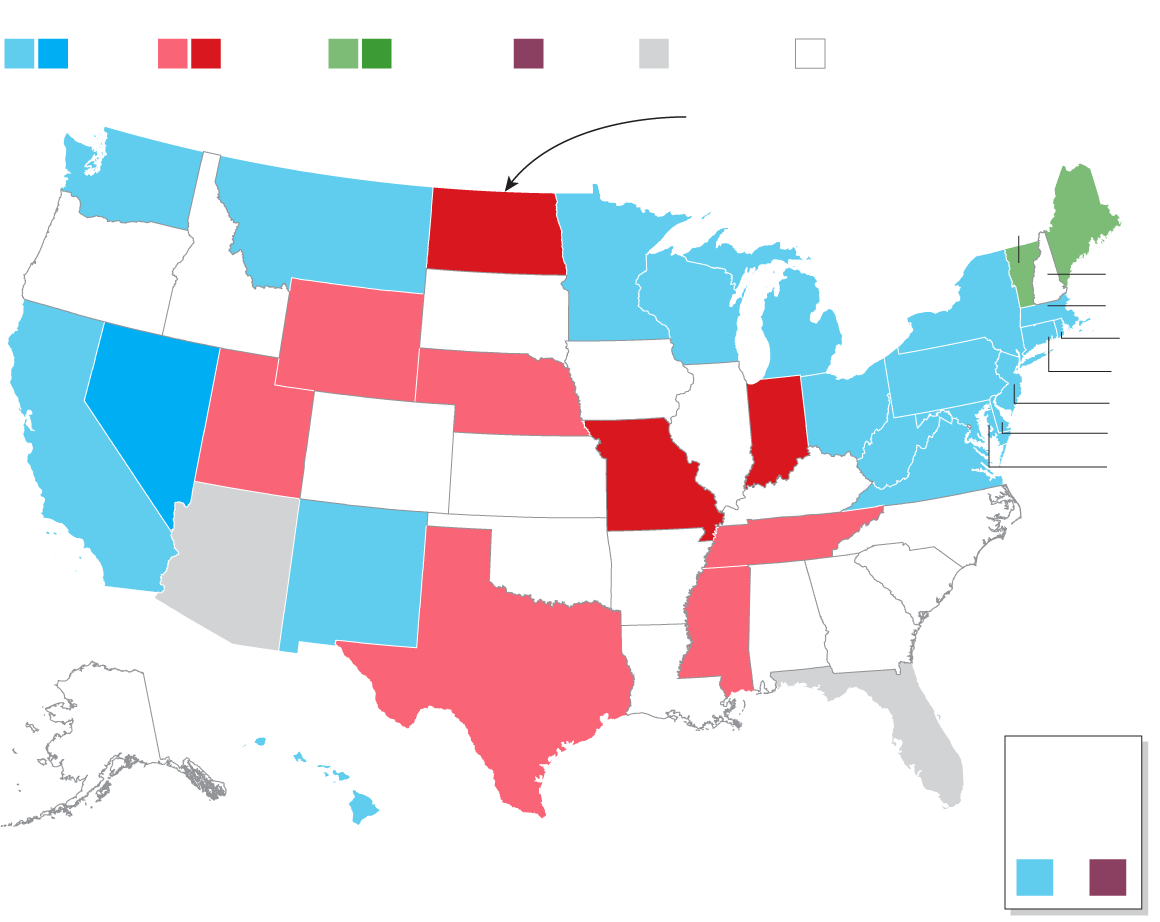 Governors: Democrats gained seven of the state governorships up for grabs on Tuesday, but the Republicans held on to two of the strategically crucial states, Ohio and Florida. By Thursday morning, the gubernatorial race in Georgia – a state plagued by alleged voter suppression tactics (more on that later) – was still undecided.

Turnout: Projections suggested turnout were the highest of any midterm election since 1970. Large turnout, coupled with some trouble at the polling stations (more on that below) left many Americans lining up for hours on Election Day.

Women and people of colour: In an election haunted by a Senate standoff over Justice Brett Kavanaugh’s Supreme Court appointment and sexual assault allegations against him, these midterms invited comparisons to 1992′s Year of the Woman, when a record number of female legislators were elected after the Anita Hill furor. On Tuesday, women flipped a number of key GOP-held districts. Here are some of the standouts, including a few that The Globe and Mail’s correspondents profiled on the campaign trail:

Nancy Pelosi: The Democrats' Minority Leader in the House is now in line to be the next speaker. Mr. Trump called her Tuesday night, in what her office said was a message of congratulations and a nod to her pitch for bipartisanship. He also tweeted in support of her speakership on Wednesday morning. She pledged later on Wednesday of a new era of congressional scrutiny over Mr. Trump, shrugging off White House threats of political warfare if Democrats launch investigations into his affairs. “We have a constitutional responsibility for oversight,” she said. “This doesn’t mean we go looking for a fight. But it means that if we see a need to go forward, we will."

In all fairness, Nancy Pelosi deserves to be chosen Speaker of the House by the Democrats. If they give her a hard time, perhaps we will add some Republican votes. She has earned this great honor!

Cannabis users: Legalization found a new foothold in the Midwest as Michigan voters passed a ballot measure allowing residents 21 and older to buy and use the drug for recreational purposes. There are now 10 states allowing recreational use, and 31 permitting medical use (including Missouri, which approved its own ballot measure on Tuesday). North Dakotans, meanwhile, rejected a recreational legalization measure. The ballot initiatives come a few weeks after Canada officially legalized recreational cannabis.

Floridian prisoners: Florida voted in favour of restoring voting rights for convicted felons who have completed their sentences. The amendment to the state’s constitution will allow more than one million ex-felons to vote, but people convicted of murder or sexual offences will not be included. About a tenth of the voting-age population in Florida is believed to be disenfranchised because of a felony conviction, according to the Sentencing Project, a criminal justice advocacy group.

Democratic candidates for Senate: An upset in the Senate would have given Democrats even more leverage to stop the President’s agenda, but as expected, they didn’t pull it off. Instead, the Democrats suffered losses in top Senate battlegrounds: Indiana, Missouri, Tennessee, North Dakota and Texas. Some hurt worse than others: In Texas, Republican Ted Cruz staved off a tough challenge from Democrat Beto O’Rourke, whose record-smashing fundraising and celebrity had stirred talk that he could be a credible 2020 White House contender. On the bright side, Mr. O’Rourke did get a bigger share of the vote than any Democratic candidate for a Senate seat in Texas since 1988.

Democrat governors: In the Great Lakes region, Democrats secured governors’ offices in Michigan, Wisconsin and Pennsylvania, complicating the president’s re-election campaign in an area that propelled him to victory in 2016. But Mr. Trump helped Republicans claim governors’ seats in Ohio and in Florida. The hotly contested Georgia gubernatorial race, where Democrat Stacey Abrams was seeking to become the first black woman to be elected governor of a U.S. state, was still too close to call early Wednesday.


Trouble at the polls

Across the country, Americans stood in lines lasting longer than three or four hours, encountered controversial restrictions to their voter registration and dealt with technical malfunctions with the voting machines, raising concerns about voter suppression.

Broken voting machines: were reported in at least 12 states, according to an “election protection” coalition of more than 100 groups that set up a national hotline for reporting irregularities. In Georgia, where the election included a tight, bitter race for governor, the state sent investigators to look into problems with digital poll books, said state spokeswoman Candice Broce. Some voters were given provisional ballots instead of using regular voting machines, she said.

Controversial ID restrictions: North Dakota introduced a voter ID requirement that Native Americans said discriminated against them. Voters needed a provable street address, and many people on reservations don’t know theirs and don’t have IDs that list it. In Kansas and Georgia, polling stations moved locations without telling voters, while changes to Tennessee registration laws led to people being removed from voting lists.

Long lines: Because of faulty machines and large turnouts, many voters waited up to three hours to vote. At a polling place in Snellville, Ga., more than 100 people took turns sitting in children’s chairs and on the floor as they waited in line for hours. One voter, Ontaria Woods, told Associated Press that about two dozen people who had come to vote left because of the lines.

Mr. Trump held a chaotic Wednesday news conference where he listed off Republicans who won their Senate and gubernatorial races, tried to spin the midterms' outcome as a victory, focusing on the Senate gains and saying the GOP had “defied history.” He also singled out Republican candidates who he believed didn’t embrace him or his policies enough, such as defeated Utah congresswoman Mia Love: “Mia Love gave me no love, and she lost,” he said, adding, “Sorry about that, Mia.”

At the news conference and on Twitter, Mr. Trump also warned the Democrats not to use their new power in the House to investigate his administration, threatening unspecified consequences if they did so. Then, hours later, the President threw a new curveball to the existing Russia investigation when he fired Attorney-General Jeff Sessions. In his place, Mr. Trump appointed a Republican Party loyalist – Matthew Whitaker, until now Mr. Sessions’s chief of staff – with authority to oversee the remainder of special counsel Robert Mueller’s probe of the Trump administration’s ties to Russia.

Previously, the Russia probe had been under the purview of deputy Attorney-General Rod Rosenstein. Ordinarily the Attorney-General would be in charge of a special counsel probe, but Mr. Sessions had recused himself because of previously undisclosed meetings with the Russian ambassador. Mr. Trump saw the recusal as a personal betrayal, and his relationship with Mr. Sessions turned sour in the months after special counsel Robert Mueller’s appointment.

The Russia investigation: Mr. Sessions’s ouster has potentially ominous implications for the Mueller investigation, given that the new acting attorney-general, Mr. Whitaker, has questioned the inquiry’s scope and spoke publicly before joining the Justice Department about ways an attorney general could theoretically stymie the probe. Congressional Democrats, concerned about protecting Mr. Mueller, called on Mr. Whitaker to recuse himself from overseeing the investigation in its final but potentially explosive stages.

New investigations into Trump: As the majority party, the House Democrats will chair important committees and will have expansive powers to investigate the President, his business dealings and the inner workings of his administration, including whether anyone from the Trump campaign colluded with the Russians to influence the 2016 presidential election. They will have authority to request Mr. Trump’s tax returns and subpoena power to obtain documents, e-mails and testimony. However, any attempt to impeach Mr. Trump is likely to run headlong into resistance in the GOP-controlled Senate. Mr. Trump, for his part, warned Wednesday that new investigations into his conduct would be met with reprisals from the branches of government Republicans still control. “They can play that game," Mr. Trump said of the House Democrats, "but we can play it better.”

Political gridlock: Losing the House will test Mr. Trump’s ability to compromise, something he has shown little interest in over the past two years with Republicans controlling both chambers of Congress. The GOP agenda includes tax and spending cuts, trade, immigration restrictions and curbs on the Obama-era health care law. Short of compromises, perhaps on infrastructure, the Republican initiatives will go nowhere in the House. Even passing many bills will be difficult for the Senate: The GOP will fall short of the 60 votes needed to break Democratic filibusters, procedural delays that kill legislation.

Foreign policy: House Democrats are expected to try to harden U.S. policy toward Saudi Arabia, Russia and North Korea, and maintain the status quo on areas like China and Iran. The Kremlin said on Wednesday it saw no prospects for an improvement in relations with the United States following the elections.

Free trade with Canada: Experts says the Democrats’ House victory means the ratification of the recently struck United States-Mexico-Canada Agreement, or USMCA, will likely have to wait well into 2019. Canada will also scrutinize the midterm results for other cross-border impacts, including the fate of the Trump administration’s painful tariffs on Canada’s steel and aluminum imports. On Wednesday, Prime Minister Justin Trudeau congratulated the election’s victors and promised Canada would continue to work on friendly terms with Congress and state legislatures.

Congratulations to the winners in last night’s US elections, including the historic number of women who will sit in the next House. Canada’s government will always work in friendship & partnership with our neighbo(u)rs to the South – in Congress and in states across the country.

Sarah Kendzior: If the midterms were a test of the country’s character, Americans failed

David Shribman: The Democrats have control of the House – but they’re divided with no clear agenda

John Ibbitson: For Donald Trump, midterm results will be a reason to double down on his nationalist agenda

From the comments: 'So much for the blue wave’: Globe readers weigh in on results of 2018 U.S. midterms