About a month ago, with Los Angeles girding for a potentially crippling surge of coronavirus cases, a massive white Navy hospital ship chugged into port: a powerful symbol of the government’s response to the pandemic.

The USNS Mercy, with 1,000 hospital beds and giant red crosses on its sides, was welcomed by California Gov. Gavin Newsom and Mayor Eric Garcetti. Both officials were making grim predictions that LA could soon look like New York City, the epicentre of the U.S. outbreak, and Garcetti noted the ship immediately became his city’s largest hospital.

That day may have been the high-water mark for the Mercy, which suffered a virus outbreak among its crew and was the target of a train engineer who hijacked a locomotive and crashed it near the ship. He told investigators the vessel was part of a government plot.

Ultimately, Los Angeles hasn’t been overrun with virus cases, and so the Mercy has not had to play its envisioned role of being a safety net in order to allow hospitals to focus on treating those infected with the virus.

The Mercy is not alone: As virus infections have slowed or fell short of worst-case predictions, the globe is dotted with unused or barely used temporary hospitals. The Navy’s other hospital ship, the USNS Comfort, left New York on Thursday as the outlook improves there. It treated 182 patients.

Since arriving at the end of March, the Mercy has treated just over 70 non-coronavirus patients for everything from heart and lung conditions to gastrointestinal problems. On Thursday, it had just nine patients on board. Its 750 medical crew members cycle through to provide treatment but otherwise are staying at local hotels to avoid another outbreak.

Even with hundreds of empty beds, there are no plans to send the Mercy home to San Diego.

“We’re encouraged by data which suggest the curve is flattening, but the threat remains,” the Federal Emergency Management Agency, or FEMA, said in a statement. “When appropriate, we will work with the city and state to determine if the mission is complete.”

Brian Ferguson, a spokesman for the California governor’s Office of Emergency Services, said talks are ongoing about how the ship’s medical workers can be used elsewhere.

Officials around the world have offered similar assessments of other temporary hospitals: Their lack of use reflected the need to over-prepare, and they could still be used in a second wave.

But the longer the Mercy stays in port with few patients, the harder it will be to justify the costs, said Bryan Clark, a senior fellow at the Hudson Institute, a conservative-leaning Washington, D.C.-based think-tank.

“There was a need to reassure people that something was being done, and hospital ships are very good for that,” said Clark, a former special assistant to the chief of naval operations.

But he warned: “Once its need passes, it can turn from a symbol of commitment to a symbol of inefficiency.”

FEMA estimates the Mercy’s mission will cost it about $7.5 million, though the final bill will not be known until the assignment’s been completed, the agency said in an e-mail to The Associated Press.

Military officials did not immediately provide a figure for costs on their end.

According to a military briefing document to the U.S. Northern Command obtained by the AP, the defence secretary approved $3.5 million for the Mercy to help cover expenses starting April 20 for the following month.

The Mercy’s Capt. John Rotruck said the ship can accept more patients. But those decisions are up to federal, state and local officials, and the health care facilities.

“We just haven’t had a request,” he said.

And the Mercy does have limitations. It can accept only patients not infected with the coronavirus and who are mobile.

The Navy recently expanded its mission by sending 40 doctors, nurses and corpsmen, most of whom were on standby to serve on the ship, to a state-run, skilled nursing facility near Los Angeles, and more personnel are available, Rotruck said.

For most people, the new coronavirus causes mild or moderate symptoms. For some, especially older adults and people with existing health problems, it can cause more severe illness and lead to death, and nursing homes have been hit hard.

This is not the first time Navy hospital ships have been criticized for being underused; the Comfort was when it was deployed in 2017 to hurricane-ravaged Puerto Rico.

In the pandemic, the Comfort also took flak because it was initially not allowed to treat virus patients, even as hospitals in New York City became overrun.

Following the outcry, the ship did end up treating COVID-19 patients.

The 894-foot-long (272 metre-long) converted supertankers are the largest military hospital ships in the world. They were built in the 1980s to treat war casualties; they have assisted after major natural disasters.

While their capabilities run the gambit from treating bomb injuries to replacing pacemakers, the ships’ wide-open treatment bays are not designed to handle highly infectious diseases that require keeping patients far apart.

The Mercy, meanwhile, has been reconfigured as nine crew members recovered from the outbreak.

About 300 to 400 crew members come on board daily to staff 250 beds, staggered over three shifts. While not on board, some crew drive vans to pick up doctors at hospitals or do intake when new patients are transferred, Rotruck said.

Some are taking time off, having worked long hours when the ship was treating about 20 patients a day, Rotruck said.

“We were able to be a relief valve in anticipation of something that didn’t quite get as bad as anybody thought that it might,” he said.

U.S. Navy to carry out broader review into spread of coronavirus aboard aircraft carrier
April 29, 2020 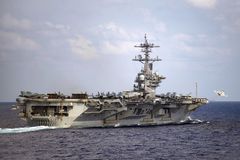 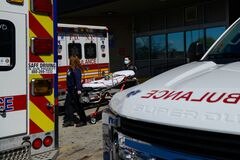