Washington’s special peace envoy Zalmay Khalilzad was in the Afghan capital Kabul on Wednesday to launch an “accelerated effort” to get Afghans on both sides of the protracted conflict to the negotiation table to plot a road map to a postwar Afghanistan.

His next stop will be Doha in the Middle East where he will restart talks with the Taliban, according to a U.S. State Department statement. The talks would be the first official round since September when President Donald Trump declared an all but done deal dead after a surge in violence killed 12 people in the capital, including a U.S. soldier.

In Kabul on Wednesday, Khalilzad met with several Afghan leaders, including President Ashraf Ghani, who repeated his call for a ceasefire.

Hekmat Karzai, chairman of the Kabul-based Center for Conflict and Peace Studies, tweeted photographs of his meeting Wednesday with Khalilzad in Kabul, saying they “spoke about the way forward.”

A Taliban official said the group has held informal talks with the Americans, without specifying where or who participated. He spoke on condition of anonymity to discuss the talks.

Khalilzad’s visit comes just days after Trump visited U.S. troops in Afghanistan for the Thanksgiving holiday, when he hinted at a resumption of peace talks with the Taliban.

Trump said the U.S. and Taliban have been engaged in talks and insisted the Taliban want to make a deal after heavy U.S. fire in recent months.

The State Department statement said Khalilzad’s Kabul and Doha talks are a follow-up to President Trump’s recent visit and to discuss how best to support accelerated efforts to get all parties to intra-Afghan negotiations.”

In Doha, Khalilzad will be pushing for a ceasefire or at least a reduction in violence with an eye to an eventual end to fighting.

The Taliban official said the U.S. has been pressing for a ceasefire, even a temporary one during the time of an agreement signing. While there has been no formal announcement of a reduction in violence, Taliban attacks at least in the cities appear to have decreased in recent weeks.

The Taliban quickly denied responsibility for Wednesday’s shooting that killed Japanese Dr. Tetsu Nakamura, as well as five Afghans, including the doctor’s bodyguards, the driver and a passenger.

Last month, Taliban officials in southern Zabul province announced an unofficial ceasefire in three districts of the province, which they mostly control. The announcement came with the release of hostages Kevin King, an American, and Australian Timothy Weeks in exchange for senior Taliban leaders, including Anas Haqqani.

Still, the Taliban have rejected an all-out ceasefire and have continued to conduct near daily attacks around the country against Afghan National Security Forces. U.S. and Afghan forces also have continued their assault on Taliban, according to daily activity reports from the U.S. military in Afghanistan.

Earlier, Suhail Shaheen, Taliban spokesman in the Qatar capital of Doha, where the Taliban maintain a political office, said the agreement, which Trump declared dead in September after a surge in violence killed a U.S. soldier, called for an immediate ceasefire with U.S. and NATO troops.

The agreement also called for an intra-Afghan dialogue to begin within 10 days of the signing. The first item on the agenda was to be a ceasefire.

American officials, who spoke on condition of anonymity because of the sensitivity of the talks, said the goal is to get to intra-Afghan negotiations. In these negotiations, Afghans – from Taliban to government representatives to prominent Afghans, including women – will decide the road map for a postwar Afghanistan.

The negotiations aren’t expected to be smooth and will include a number of thorny issues from constitutional reform to the fate of armed militias, Taliban fighters, local police and national security forces.

Khalilzad, tweeted earlier Wednesday that a recent military campaign targeting the Islamic State group was an example of an “effective operations by U.S./Coalition & Afghan forces as well as the Taliban.”

In recent days, President Ghani has said the Islamic State affiliate has been routed from its strongholds in eastern Nangarhar province.

Taliban say they are ready to restart peace talks one day after Trump’s visit to Afghanistan Subscriber content
November 29, 2019 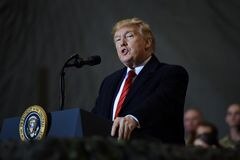 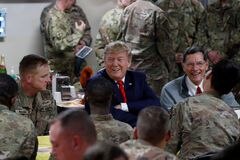