With the highly contagious Delta variant fuelling a surge in coronavirus cases just as students return to classrooms, major school districts in Arizona, Florida, Texas and beyond are increasingly defying Republican leaders who banned school mask mandates in several states.

The showdowns have drawn in the White House and landed in courtrooms where judges have so far allowed school mask requirements in two states.

Schools across the U.S. have a patchwork of different rules as they try to keep classrooms open during the coronavirus pandemic, but in several states GOP leaders banned districts from requiring all kids to wear masks.

But with infections and hospitalizations on the rise and vaccinations out of reach for young children, districts in blue-leaning urban areas especially are rebelling against the laws and requiring masks in schools – even if it means facing consequences from governors and courts. Districts in Phoenix, Dallas, Houston, Austin, San Antonio and Broward County, Florida, are among those defying the mask laws.

“At no point shall I allow my decision to be influenced by a threat to my paycheque; a small price to pay considering the gravity of this issue and the potential impact to the health and well-being of our students and dedicated employees,” said Alberto Carvalho, the superintendent of the state’s largest school district who is still deciding on a mandate ahead of the start of school later this month.

Masks are a key coronavirus-prevention tool that doesn’t pose health risks for kids older than toddler age and are most effective when worn by a larger number of people, public health experts say. The Centers for Disease Control has again recommended them for schools.

But mask rules have nevertheless drawn fierce protest, including takeovers of school board meetings, from activists who worry about side effects, question the need and say parents should decide.

The DeSantis threat to withhold salaries drew in the White House on Tuesday as press secretary Jen Psaki weighed paying out of federal funds to school officials who “do the right thing to protect students and keep schools safe and open.”

Though children are less likely to suffer serious health effects as compared with the elderly, the latest COVID-19 wave hammering Florida is also fuelling an “enormous increase” in cases among children, many of whom are sicker than doctors have seen previously, the chief medical officer at one of the state’s top children’s hospitals said Wednesday. Leaders of other medical systems in virus hot spots like Louisiana say a similar situation is occurring in their pediatric hospitals.

DeSantis, for his part, said the numbers of hospitalized kids are on the rise because total coronavirus cases are up. “There’s been no change in the proportion of pediatric patients who are COVID positive,” he said.

At least three Florida school districts appear to be defying DeSantis’s executive order forbidding masks, including the second-most-populous county in the state and another around the state capital.

In Texas, where COVID-19 hospitalizations have spiked to their highest level in six months, a judge sided with San Antonio and temporarily allowed the city, county and public schools to require masks. Another hearing is set for next week. Republican Gov. Greg Abbott banned mandates in July and is showing no sign of backing down, even as other school districts in major cities like Dallas, Houston and Austin issue mandates in defiance of his ban.

A state ban on mask mandates isn’t faring well in the courts in Arkansas either. It was temporarily blocked last week by a state judge who said the prohibition violated the state’s constitution. One plaintiff was an Arkansas school district where more than 1,000 staff and students had to quarantine because of a coronavirus outbreak.

Since the decision, at least three dozen school districts and charter schools have implemented mask requirements for teachers and students.

In Utah, meanwhile, the health director over the state’s biggest county is trying to buck a state law with a new mandate for kids under 12. Angela Dunn, who previously became a target for anti-mask ire as the state epidemiologist, has said she’s deeply concerned about infections sickening kids and disrupting schools.

“There’s far less drama in a school where all kids are wearing masks than a spread of COVID within that school and kids being sent home to address illness, or to be put into quarantine or isolation,” said Democratic mayor Jenny Wilson, who’s backing the move that may yet be tanked by the Republican-controlled county council.

In South Carolina, a showdown is heating up between the Republican governor and the capital city over a school mask mandate that local leaders approved last week. The attorney general threatened to take Columbia to court if leaders try to enforce the rule aimed at protecting elementary and middle school kids too young to get vaccinated. Republican Gov. Henry McMaster said Monday it should be up to parents whether to mask kids.

Dozens of doctors in Arizona have begged GOP Gov. Doug Ducey to mandate face coverings in public schools, but he’s held fast to a prohibition in the state budget. Still, about 10 districts in Phoenix, Tucson and Flagstaff, representing more than 130,000 students and 200 schools, have defied that prohibition and a high school biology teacher has filed a lawsuit challenging it. A hearing is set for Friday.

“There is no mask prohibition in Arizona,” gubernatorial spokeswoman C.J. Karamargin said last week. “The legislation passed by the Legislature and signed by the governor is clear: Arizona is anti-mask-mandate.” 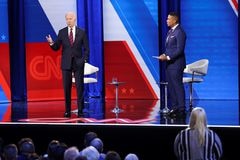 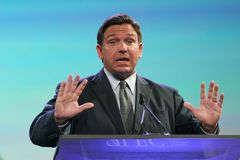 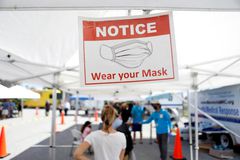