U.S. President Donald Trump, under intense pressure from moderates in his own party over his Supreme Court nominee, on Friday ordered an FBI investigation into sexual-misconduct allegations against Brett Kavanaugh at the request of Senate Republicans, a move that will delay the contentious confirmation process by a week.

The key player in a day of dramatic and unexpected developments was U.S. Senator Jeff Flake, a moderate Republican retiring from the Senate in January who provided the decisive vote to approve Justice Kavanaugh’s nomination in the Senate judiciary committee and send the matter to the full Senate.

But Mr. Flake, after urgent consultations with colleagues including Democratic Senator Chris Coons, cast the vote only after asking the Republican-led panel to request the Trump administration pursue an FBI probe lasting up to seven days of the explosive allegations against Justice Kavanaugh.

Mr. Trump, who had previously rebuffed Democratic demands for an FBI probe, granted the request, ordering the “supplemental investigation” to be “limited in scope and completed in less than one week.”

However, the U.S. president, who had been relatively restrained during the day, took to Twitter again on Friday evening.

“Just started, tonight, our 7th FBI investigation of Judge Brett Kavanaugh. He will someday be recognized as a truly great Justice of The United States Supreme Court!,” Trump said in a tweet.

Mr. Flake’s move came a day after an extraordinary hearing in which university professor Christine Blasey Ford detailed her sexual-assault allegation against Justice Kavanaugh. Mr. Flake’s action also came only hours after two protesters who said they were sexual-assault survivors cornered him in an elevator and castigated him for announcing he would vote for Justice Kavanaugh in the committee.

What you missed from the hearings: Blasey Ford’s testimony, Kavanaugh’s angry denial

“That’s what you’re telling all women in America – that they don’t matter, they should just keep it to themselves,” one of the protesters shouted at Mr. Flake, a frequent Trump critic who looked shaken by the encounter.

Mr. Flake, who had a pained expression when he made his request for an FBI probe in the committee after forcing a brief delay in the scheduled vote, was supported by two other Republican moderates, Lisa Murkowski and Susan Collins, both of whom have not announced whether they would support Justice Kavanaugh.

The allegations against Justice Kavanaugh, with the backdrop of the #MeToo movement against sexual harassment and assault that has toppled a succession of powerful men, have riveted the United States even as they have imperilled his confirmation chances.

Mr. Trump’s nomination of Justice Kavanaugh, a conservative federal appeals court judge, for a lifetime job on the top U.S. court had appeared to be going along smoothly until Prof. Blasey Ford’s allegation surfaced last week. He has denied her allegation and accusations of sexual misconduct made by two other women.

The committee vote followed a jarring and emotional hearing on Thursday in which Prof. Blasey Ford accused Justice Kavanaugh of sexually assaulting her in 1982, when both were high-school students in Maryland. Justice Kavanaugh denied the accusation and accused Democrats – who have opposed his nomination from the outset – of a “calculated and orchestrated political hit.”

In a statement issued by the White House, Justice Kavanaugh said he would co-operate with the FBI investigation.

If confirmed, Justice Kavanaugh would consolidate conservative control of the country’s highest court and advance Mr. Trump’s broad effort to shift the American judiciary to the right.

The controversy has unfolded just weeks ahead of the Nov. 6 congressional elections in which Democrats are trying to seize control of the U.S. Congress from the Republicans.

“This country’s being ripped apart here,” Mr. Flake told his fellow senators about the nomination fight. “I think we can have a short pause,” he added.

“We ought to do what we can to make sure that we do all due diligence with a nomination this important,” Mr. Flake said.

Even before Mr. Flake’s move, it was unclear if Republicans had the votes to confirm Justice Kavanaugh on the Senate floor. Republicans hold a slim Senate 51-49 majority, making the votes of Ms. Murkowski and Ms. Collins crucial. Mr. Trump can afford to lose the vote of only one senator in his own party if all the Democrats vote against Justice Kavanaugh and U.S. Vice-President Pence casts a tie-breaking vote.

Mr. Trump said Ms. Murkowski and Ms. Collins must do what they think is right. Moderate Democrats Joe Manchin and Heidi Heitkamp, who have not yet announced how they will vote on Justice Kavanaugh, also supported Mr. Flake’s move.

Mr. Trump indicated he was sticking with Justice Kavanaugh, saying he has not thought “even a little bit” about replacing him.

With tempers flaring, the committee advanced the nomination 11-10 along party lines. The Senate formally moved to open debate on Justice Kavanaugh’s nomination later on Friday in a move agreed to by both parties, setting the stage for a planned final vote on confirmation at the end of next week.

“This is a nomination that deserves to move forward,” Senate Majority Leader Mitch McConnell said.

Prof. Blasey Ford’s lawyer, Debra Katz, welcomed the FBI investigation and thanked the senators who pushed for it but decried the limits imposed on it. “A thorough FBI investigation is critical to developing all the relevant facts,” Ms. Katz said.

Before Mr. Flake’s move, committee Republicans voted down a Democratic motion seeking to subpoena Mark Judge, a Kavanaugh friend whom Prof. Blasey Ford said witnessed the assault. Mr. Judge had told the committee in a written statement he does not recall any such incident. He is likely to be central to any FBI probe.

Mr. Judge’s lawyer said he would co-operate with the FBI or any other law enforcement agency.

“This was someone who was aggressive and belligerent. I have never seen someone who wants to be elevated to the highest court in the country behave in that manner. In stark contrast, the person who testified yesterday and demonstrated a balanced temperament was Dr. Ford,” Ms. Feinstein said.

The American Bar Association, which earlier endorsed Justice Kavanaugh, and the dean of Yale Law School, which Justice Kavanaugh attended, also called for an FBI probe on Friday, the first indication of the legal profession turning on the nominee.

Justice Kavanaugh could be the deciding vote on contentious legal issues if he is confirmed to the nine-member court, with disputes involving abortion, immigration, gay rights, voting rights and transgender troops possibly heading to the court soon. The court begins its next term on Monday. 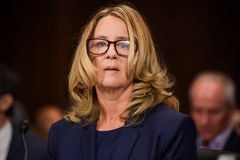 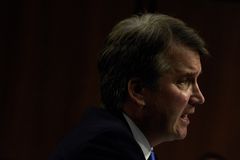 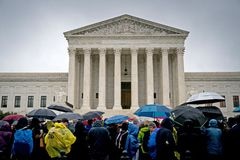