The White House is making plans to share as many as 60 million doses of COVID-19 vaccine, including 10 million in the coming weeks – but exactly where they will go remains to be seen.

The first 10 million Oxford-AstraZeneca doses, a product not yet approved for use in the U.S., must be reviewed by the Food and Drug Administration before they can be exported, press secretary Jen Psaki said Monday.

“Our national security team, our COVID team, working with the State Department and others – we’re going to assess a range of requests, a range of needs around the world,” she said. “We expect there to be approximately 10 million doses that could be released, if or when the FDA gives its concurrence, which could happen in the coming weeks. So this is not immediate.”

It was not immediately clear whether any specific countries are especially high on the White House priority list, although much of Monday’s briefing lingered on plans to provide hard-hit India with oxygen, raw material for vaccines, personal protective equipment and other supplies.

“We are continuing to look for a range of ways to help India, so we’re talking about what we can redirect what is available now,” Ms. Psaki said, citing a particular need for oxygen and oxygen-generation systems.

“We may be in a position to reroute shipments planned for other countries with lower immediate needs, given the urgency of the conditions in India.”

The country has been swamped by a devastating second wave of the virus, with nearly 353,000 new cases and 2,800 deaths on Monday alone. Hospitals are overwhelmed and vaccine supply can’t keep up with demand.

Dr. Anthony Fauci, the head of the U.S. National Institute of Allergy and Infectious Diseases, said Sunday on ABC’s This Week that sharing AstraZeneca doses with India is on the table.

“That’s something that certainly is going to be actively considered.”

Canada, however, has clearly been on U.S. President Joe Biden’s mind of late.

Last week, after a phone call with Prime Minister Justin Trudeau, he noted the U.S. had already sent 1.5 million AstraZeneca doses north of the border and suggested more would be forthcoming.

“We helped a little bit there,” Mr. Biden said. “We’re going to try to help some more.”

The remaining 50 million doses are still in various stages of production and likely won’t be subject to approval until May and June, Ms. Psaki said.

She did say, however, that they would be shared on a bilateral basis, rather than through the global vaccine development initiative known as COVAX.

“We’re working through what the process will look like and we will consider a range of options from our partner countries, and of course much of that will be through direct relationships,” Ms. Psaki said.

Ms. Psaki didn’t rule out whether future shipments would have to be characterized the same way.

“We are considering a range of options,” she said.

“As we put together a plan and we consider the range of requests we have and determine where we will be distributing vaccines, we will do that through a range of means.” 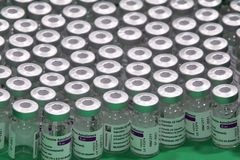 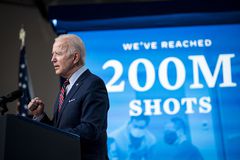 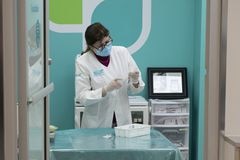