Real estate agents in Vancouver have noticed something unusual in the past few weeks. For the first time in recent memory, the number of Hong Kong Chinese attending open-house showings has exceeded that of mainland Chinese buyers, who have been a visible presence in the city’s real estate market over the past decade.

The people arriving at home showings in Vancouver offer a vivid example of the global dislocations under way as Hong Kong finds itself newly immersed in fear that its unique status under China’s one-country, two-systems framework is under threat. Millions have marched in the city to protest a proposed extradition law, which has heightened fears that Beijing is encroaching on the legal system that upholds the city’s liberties.

Agents at Macdonald Real Estate Group in Vancouver have seen a “noticeable” change in who is arriving at doorsteps, president Dan Scarrow said. “The ratio of Hong Kong Chinese to mainland Chinese at their open houses increased significantly over the last few weekends,” he said.

An estimated 300,000 people in Hong Kong hold Canadian passports and the extradition bill, even though its passage has now been suspended, has provided a new push to look elsewhere.

Condo buyer’s guide: When to buy, how to finance and advice on hidden costs

A decade has passed since Vancouver’s empty-condo revelation

“This whole episode has reminded Hong Kongers that they will be 100-per-cent mainland in 28 years regardless,” Mr. Scarrow said. Beijing has pledged to give Hong Kong a high degree of autonomy under the one-country, two-systems formula until 2047.

Syrus Lee, a prominent real estate agent in the Vancouver Chinese community, has noticed the same phenomenon: The number of Hong Kong-related home buyers now exceeds those from mainland China, he said. That’s in part because the 20-per-cent foreign-buyers tax that British Columbia has placed on home purchases in the Vancouver region has caused mainland buyers to retreat.

The tax doesn’t apply to Canadian citizens, including those who live in Hong Kong but are now thinking about moving to Canada amid the controversy over the extradition legislation, which was designed to ease the ability of other countries, including mainland China, to bring back people considered fugitives of serious crimes. It has raised fear in Hong Kong that it would provide an opening for Beijing to legally seize dissidents and others on trumped-up charges.

At the office of Hong Win International Group, interest in buying Canadian condos is up by roughly a third over the past few months, the period during which debate over the extradition bill has seized the city.

The controversy has been a “catalyst” for people who might have already been considering a move back to Canada, said Michael Chan, executive director of Hong Win, which works with property developers to sell newly built condo units to buyers in Hong Kong. His 22nd-floor office is decorated with sales trophies and brochures for condos in Toronto and Vancouver.

”This bill and these protests have really enhanced their thinking about going back,” he said, with some bringing forward moving plans by several years. Some now feel as if “they have to make a decision,” he said.

Expensive housing, pricey education and a latent worry about Chinese influence have already caused some people to consider leaving Hong Kong. Thousands have moved to Taiwan, while some of the city’s ultrawealthy have discussed transferring assets to Singapore. Thousands more have become re-returnees, members of families who left for Canada decades ago, then came back to Hong Kong in following years – only to now once again move across the Pacific to Canada.

Changes to Canadian immigration law have provided another impetus, since those born abroad must give birth to their own children on Canadian soil to maintain a Canadian passport.

For someone in that situation, “when you see things like what’s happening in the last few years, and you feel that China is taking its place more and more in Hong Kong – often those people need a nudge, just a soft nudge, to say, ‘you know what, let’s move back,’” said Jean-François Harvey, a Canadian lawyer who is worldwide managing partner for Harvey Law Group, which specializes in immigration and taxation.

And the protests and violence over the extradition law have been “a big nudge, for sure,” he said. People have been calling his office to inquire about whether there are any legal obstacles to buying a house in Canada. “The last 10 days in Hong Kong we see a big surge” in calls, Mr. Harvey said. “People are getting fed up,” he added, although at the moment it’s not “a surge of people moving out. It’s a surge of people getting ready to do that.”

It doesn’t hurt, he added, that a small apartment in Hong Kong is worth enough to “buy a very nice house in Vancouver.”

Property developers around the world have taken note.

At Spacious, a Hong Kong-based online real estate listings service, listing and advertising inquiries from overseas developers are up by 62 per cent in the past two months.

“These developers and brokers have told us they think the recent events provide an opportunity to market and sell their overseas properties to Hong Kong’s international property buyers,” chief operating officer James Fisher said.

Though 2047 remains nearly three decades away, that is a relatively short time horizon for investors buying property that could be used for generations. Without any clarity from Beijing on how Hong Kong will be treated after 2047, it’s a question, Mr. Fisher said, that is likely to weigh increasingly heavily on the city.

“Investors don’t like uncertainty or questionable legal systems, so the recent events are a net negative for Hong Kong asset markets, including property,” he said. And, he added, they are “a net positive for property markets favoured by internationally minded Hong Kongers – like those in the U.K., Canada, USA and Australia.” 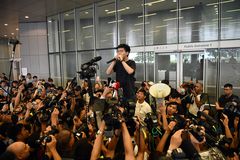