When a Venezuelan political party asked union leader Henry Arias to run for congress on a platform opposing President Nicolas Maduro, Mr. Arias quickly responded that the party in question didn’t actually represent the opposition – and turned them down.

Weeks earlier, Venezuela’s supreme court had put the main opposition parties in the hands of politicians who had been expelled from those parties on accusations of corrupt dealings with Mr. Maduro’s government.

These politicians, who are widely accused of being Mr. Maduro’s shadow allies, are now scrambling to find candidates to run in December’s congressional election, according to opposition leaders and activists.

“I wouldn’t run even if they put in the money,” Mr. Arias said in a telephone interview, saying the court-appointed party leaders are seeking to help Mr. Maduro legitimize an election that the opposition is expected to broadly boycott.

“That would be betraying my family and myself,” said Mr. Arias, who declined to identify the political party that called him.

Union leaders, student activists and party militants in the provinces have been receiving similar phone calls from the newly installed leaders of political parties First Justice, Democratic Action and Popular Will, according to the interviews.

The effort signals that Mr. Maduro is concerned that a boycott will undermine an election that will already be complicated by the COVID-19 pandemic. The vote is expected to allow the Socialist Party to take back control of congress, the only major governmental institution outside its control.

That would change the situation of opposition leader and congress chief Juan Guaido. Last year, he was recognized by more than 50 countries as Venezuela’s rightful president after assuming an interim presidency in 2019 on the grounds that Mr. Maduro’s 2018 re-election was fraudulent.

Mr. Maduro calls Mr. Guaido a U.S.-backed puppet seeking to oust him in a violent coup, and has accused Mr. Guaido and his allies of not wanting to participate in the elections because they know they will lose. The court-appointed opposition leaders deny supporting the Socialist Party and say Mr. Maduro’s adversaries backed them after growing weary of the existing opposition leadership.

“I don’t know if there are candidates,” said Jose Brito, appointed by the supreme court to be leader of First Justice after being expelled from the party last year amid influence-peddling accusations that he denies.

“There will be meetings to determine that.”

Mr. Guaido declared the legislative vote illegitimate after the pro-Maduro supreme court named a new directors to the election council even though the constitution specifically grants this power to congress.

The new electoral council then expanded the number of legislators to be elected to the next congress by 66 per cent, adding 110 new legislative seats in what critics called an effort to dilute opposition influence in parliament.

Some of Mr. Maduro’s adversaries have cautiously broached the idea of joining the elections, but insist that they would only do so if the government improved conditions.

The court-appointed opposition leaders also appear to lack the rank-and-file party activists who are crucial to run campaigns and to serve as poll station witnesses.

Engineering student Hector Pinto of the central state of Aragua got a WhatsApp message this month from a person who said they were part of the “new party leadership” of First Justice, asking if Mr. Pinto would recognize the court-appointed leaders.

“We know they are usurping [the leadership of the party] and I refused to accept this proposal,” Mr. Pinto said in a phone interview. “I know they’ve contacted members of the youth leadership in other states and [the youth leaders] have also refused.”

The traditional leaders of those parties disavow the court ruling, but they appear to remain in limbo. Their legislative terms are set to expire in January, at which point they will no longer have parliamentary immunity.

Mr. Maduro’s shadow allies first rose to prominence in January, when they unexpectedly declared themselves to be the new leaders of congress after troops blocked Mr. Guaido from entering parliament on the day of the annual election of legislative leadership.

Mr. Guaido, who was later re-elected head of congress by a majority of legislators, said the lawmakers had been bribed to do the bidding of the ruling Socialist Party while pretending to be working against Mr. Maduro.

Javier Torres, a union leader, refused a request to run for congress in December from the same group on mistrust of their motives.

“Those parties are trying to recruit candidates among recognized union leaders, but we are not going to serve as tool for the regime,” Mr. Torres said in an interview. 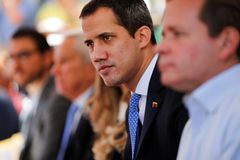 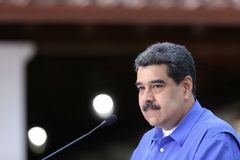 Trump walks back comments, says he would only meet Maduro to discuss Venezuelan President’s exit from office
June 22, 2020 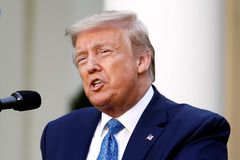