Demonstrations in Cap-Haitien turned violent on Thursday as gunshots rang out while supporters of slain President Jovenel Moise blocked roads and demanded justice while threatening to disrupt his upcoming funeral.

A heavily armed police convoy carrying unknown officials rushed through a barricade of flaming tires set up at the end of a bridge, with one vehicle nearly flipping over as it passed through.

“This is real messed up since Jovenel died,” said David Daniel, who stood in the doorway of a restaurant he co-owns as he watched the scene unfold. But he said he doesn’t think the unrest will have the effect demonstrators intend. “Violence has been here in Haiti since I was a kid, so I don’t think violence is going to change anything.”

Earlier on Thursday, a priest told mourners at a memorial service Thursday that too much blood is being shed in Haiti as authorities warned of more violence ahead of his funeral.

“The killings and kidnappings should stop,” he said, noting that poor communities are the most affected. “We’re tired.”

The Mass at the cathedral in the northern coastal city of Cap-Haitien was about half-full and Moise supporters kept interrupting as they cried out and accused Haiti’s elite of killing the president.

A man who identified himself as John Jovie stood outside the church with a group of men and threatened more violence if wealthy members of the elite from the capital of Port-au-Prince showed up for the ceremonies.

“We ask them not to come to the funeral,” he said. “If they come, we will cut their heads off. We will bring our guns out of hiding. We want justice for Moise.”

The mayor of Cap-Haitien arrived at the cathedral with heavy security as men with high-powered weapons stood watch during the entire Mass.

Nearby, some people signed a blue condolences book that the mayor’s office had set up next to the cathedral as well-wishers stood before a portrait of Moise and rows of candles whose flames flickered in the hot wind.

“My President. Go in peace. God sees everything. Fight for change,” wrote Louis Judlin, a 36-year-old electrician and father of two.

He said he is unemployed and struggles to find food to feed his children. “Life is truly hard for every Haitian. To eat, to go to school, to have health, transportation,” Judlin said.

On Thursday evening, first lady Martine Moise and her three children attended a small religious ceremony where government officials including newly installed Prime Minister Ariel Henry offered their condolences. It was her first public appearance since arriving in Cap-Haitien. She did not make any public comments.

The Mass was held a day after violence erupted in Quartier-Morin, located between Cap-Haitien and Moise’s hometown. Associated Press journalists saw the body of a man whom witnesses said was killed during the protests organized by armed men who blocked roads with large rocks and burning tires.

“That’s the only way we have to demand justice,” Aurelien Stanley, a Moise supporter, said of the violence. “If we don’t get justice for Jovenel, we will do whatever it takes to stop the funeral from happening.”

A private funeral for Moise was planned for Friday as authorities continue to investigate the July 7 attack at the president’s home, in which he was shot several times and his wife seriously wounded.

Meanwhile, the U.S. State Department announced the appointment of Daniel Foote, a career member of the Foreign Service, as its special envoy for Haiti.

Haiti’s police chief, Leon Charles, said 26 suspects have been arrested so far, including three police officers and 18 former Colombian soldiers. Another seven high-ranking police officials have been detained but not formally arrested as authorities probe why no one in the president’s security detail was injured that night.

Violence flares in Haiti ahead of slain president’s funeral
July 21, 2021 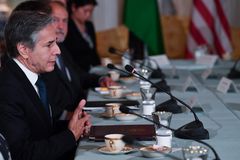 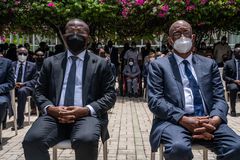