A prominent donor to WE Charity has alleged that the charity was “duplicitous” in its relationships with donors and has failed to provide a proper accounting of its use of donor funds in Kenya.

Reed Cowan, a U.S. television journalist who estimates that he has mobilized millions of dollars for WE Charity, told a House of Commons committee that the charity had misled donors by promising sponsorship of the same Kenyan school to different groups without their knowledge.

Mr. Cowan said he has repeatedly asked the charity for a full accounting of all funds raised by him and his team of donors. “As of this date, I have not been provided that accounting,” he told the committee on Friday.

The journalist, a former member of an advisory board to the charity’s Kenyan affiliate, is the first independent donor to testify to a parliamentary committee since the scandal that erupted last year over a federal contract awarded to the charity to run a $912-million student volunteer program. The contract was later cancelled.

Mr. Cowan, often overcome by emotion as he spoke, said he spent years raising funds for WE Charity’s schools in honour of his four-year-old son, Wesley, who died in an accident in 2006. The charity promised that schools would be built and named for his son, he said.

“I want to know why his legacy feels robbed,” Mr. Cowan said. “I feel burned. I don’t know who the bad guys are.”

In a statement on Friday, the charity apologized to Mr. Cowan for removing a plaque from one of the classrooms that he had funded. But it denied that it had “double-funded” the schools, and it said it is seeking records to fulfill his request for a financial accounting.

Several MPs on the House of Commons ethics committee said they were disturbed and concerned by Mr. Cowan’s testimony. “All of us are pretty shaken up,” New Democrat MP Charlie Angus said.

He noted that other media reports had described the charity promising the same school or water project to multiple donors, each of whom was convinced that they were funding the entire project. “This looks to me like a pattern of duplicitous behaviour with donors,” Mr. Angus told the committee.

Mr. Cowan had travelled to Kenya in 2007, on the first anniversary of his son’s death, to open a school in his son’s name. He said he was inspired by seeing Craig Kielburger, co-founder of WE Charity, speaking about the schools on an episode of Oprah Winfrey’s television show.

Recently, however, he discovered a video of the same school, emblazoned with the name of another U.S. philanthropist. The video, he said, “suggests damningly” that the charity had already held an opening celebration at the same school for a different donor.

“It raised a lot of questions and felt pretty damn devastating.”

Mr. Cowan said he first raised his concerns with Craig and his brother Marc Kielburger and other leaders of WE Charity in late December after he read a media report that the charity had swapped some of the sponsorship plaques on its Kenyan schools after the donors had left.

“I gave Craig hell,” he said. Since then, the charity officials have “blown up my phone with e-mails and text messages and voice mails and phone calls,” he said.

There must be “line-by-line accountability” on all donations and revenue received by WE Charity, he said. “Do the buildings on the ground match the money?”

In its statement in response to the testimony, WE Charity said that the classrooms funded by Mr. Cowan are still standing and functioning today.

It said the system of donor matching at WE Charity projects in Kenya was reviewed last year by a forensic accountant, Al Rosen. It quoted the accountant as saying that “multiple donors” can be linked to projects “until the needs are fulfilled.” It is inaccurate to say that donors are inappropriately “double matched” to the same project, the charity said, quoting Mr. Rosen.

O’Toole rejigs Tory critic portfolios as he continues working to get party on election footing
February 10, 2021 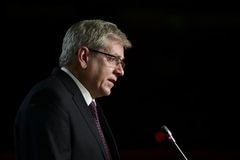