Ottawa and Beijing may have reached the worst moment in their relationship in a half-century, but Canada’s top diplomat in China is calling for greater ties with a country whose economic importance continues to grow.

“The weight of the world is shifting and has shifted toward Asia, so we need to do more in China,” Dominic Barton told a Canada-China economic policy forum organized Friday by the University of Alberta’s China Institute.

The Globe and Mail obtained a recording of the remarks made by Mr. Barton, Chinese Ambassador to Canada Cong Peiwu and several other speakers.

Canada has spent almost two years in a dispute with China, following the arrest of Huawei executive Meng Wanzhou at Vancouver airport on a U.S. extradition warrant and a series of subsequent actions from China. Those include the arrest of Canadians Michael Kovrig and Michael Spavor, the sentencing to death of four other Canadian citizens and the blocking of some agricultural imports. Critics have accused China of taking hostages in a political dispute, and Foreign Affairs Minister François-Philippe Champagne has said Canada needs to reassess how it deals with a country that practices coercive diplomacy.

Next month marks the half-century mark of the opening of diplomatic relations between Canada and China, but “it’s the lowest point, I think, in our 50-year period, since 1970,” Mr. Barton said at the forum.

Yet he also spoke at length about the economic opportunities for Canada in China’s expanding economy.

His comments are in line with long-held views toward China among Canada’s Liberal establishment and business community.

His optimism, though, calls into question how much Ottawa is willing to change its approach to the country, even as the Justin Trudeau government formulates a new framework for China, which it expects to make public in the coming weeks.

“China is going to play a much more profound role as we think about the next 50 years,” Mr. Barton said. And Canada’s strength in natural resources, financial regulation and artificial intelligence complements China’s own needs, he added. “There is a potential for us to do a lot together.”

“There is a recentring of the world economy, and China is very much in the centre of that,” Mr. Barton said.

“Clearly, China is well on the way to becoming the largest economy in the world. It will just be a couple of years before it is absolutely the largest consumer market in the world,” he said. China is already a “centre of technological innovation, which I don’t think gets talked enough about.”

He cited statistics showing that Asia accounted for 43 per cent of the world’s gross domestic product in 2019, a figure that’s expected to rise to 60 per cent by 2030.

The consultancy McKinsey & Company has published less exuberant forecasts, predicting that Asia’s share of global GDP should exceed 50 per cent by 2040, up from 42 per cent last year, on a purchasing power parity basis.

In Canada, though, public opinion has turned against China. In an Angus Reid poll released in May, just 14 per cent of adults expressed a positive opinion of China. In July, Ipsos Reid found 82 per cent of people believe Canada should be less dependent on China for trade.

The Chinese government has received widespread condemnation for its mass incarceration of largely Muslim ethnic groups, its erosion of Hong Kong’s autonomy through the imposition of a national security law on the city and its military expansionism in the South China Sea.

“It is impossible to remain ambivalent on China now that we know what it is up to … not to mention the way it has bullied Canada. And we have not seen the end of it,” Guy Saint-Jacques, a former Canadian ambassador to China, told the forum.

It is “high time for the Canadian government to adopt a much firmer attitude with China,” he said. That should include zero tolerance for Chinese interference and spying operations in Canada, as well as an expanded effort to diversify “our trade, by relocating resources from China to other markets.”

But others doubt Ottawa will make any radical changes to its China policy. “I do not expect anything fresh from the current government, which is beset by the pandemic, scandals, minority status, progressive wobbliness, weak ministers, U.S. elections and lack of bureaucratic imagination,” said John Higginbotham, who from 1989 to 1994 was the commissioner for Canada in Hong Kong, a role equivalent to that of an ambassador.

Former Liberal leaders, as well as 100 former Canadian diplomats, have urged Mr. Trudeau to release Ms. Meng in hopes of securing the freedom of Mr. Kovrig and Mr. Spavor.

The lack of resolution to that issue has been a “straitjacket” on Canadian diplomacy and has placed Ottawa in the middle of a “schoolyard kind of spitting match,” Lloyd Axworthy, who was foreign affairs minister under Prime Minister Jean Chrétien, told the forum.

“Are we just measuring how high we jump when the Trump administration whistles?” he asked. Better, he said, to remove the stumbling block between Canada and China in order to better deal with other pressing issues. “Right now it seems like we’ve become obsessed, almost – or solely functioning or focused. I want to have a liberation on this for Canada.”

Mr. Cong, China’s ambassador to Canada, criticized what he called the “barbaric act of bullying” against Ms. Meng by the U.S. – which accuses her of fraud related to the violation of sanctions against Iran – and accused Canada of being “an accomplice.”

Still, Mr. Cong held out hope for a return to “normal,” suggesting Canadian companies might find opportunities in China in finance, manufacturing, agriculture, medicine and education. The two countries “are on the same wavelength” on issues such as multilateralism, free trade, peacekeeping, climate change, the treatment of infectious diseases and support for international organizations, he said.

“Looking ahead, I have full confidence in the long-term development of China-Canada trade, as this is in line with the trend of the times and in the fundamental interest of the people of our two countries,” he said. 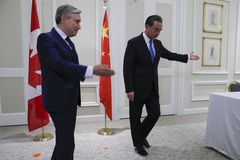 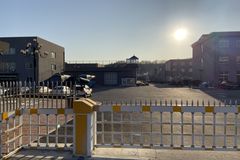 Opinion
‘Tough on China’ is a winning idea for Erin O’Toole – if he can decide what ‘tough’ means
Subscriber content
September 18, 2020