Six years ago, on the day after Vladimir Putin won a Russian presidential election, a crowd of tens of thousands of opposition supporters took to the streets of Moscow. They believed Mr. Putin had lost his right to rule their country, and chanted “Russia without Putin!” as they marched.

There was excited talk in the crowd of another Russian revolution. For a few hours that night – before the bulk of the demonstrators got cold and decided to go home – it felt like it could happen.

Six years later, on the day after another presidential election, Russia without Putin seems almost unimaginable. That is both a triumph for the Russian leader, and a giant question mark that obscures this country’s longer-term future.

Much has happened since that frigid night in March, 2012. Russia has annexed the Crimean Peninsula from Ukraine, weathered escalating international sanctions and sent soldiers into Syria. Among other crimes, Mr. Putin’s Kremlin stands accused of meddling in the 2016 U.S. presidential election, and of ordering the use of a nerve agent to poison a former Russian spy living in the United Kingdom.

And yet the only Postelection demonstrations this time around were those organized by the Kremlin, with Mr. Putin himself appearing before a crowd on Sunday night to lead chants of “Russia! Russia!”

Many in the West will look at the result of Sunday’s election – Mr. Putin was re-elected with almost 77 per cent of the vote – and shrug. In many ways, nothing has changed. Mr. Putin was President yesterday, he was President 18 years ago and now he’ll be President for at least six more years.

But inside Russia – which is now very much its own information sphere – the scale of Mr. Putin’s victory matters. The 77 per cent who voted for Mr. Putin represents a 13-point rise on the 64 per cent he won in 2012, when he was facing an equally unimpressive field of challengers and there were many more allegations of election fraud. State media spent Monday highlighting how Mr. Putin had set a record by winning almost 10 million more votes than he had in 2012.

Yes, that total was bolstered by ballot-stuffing and a sinister get-out-the-vote effort that saw government departments, factories and universities pressure employees and students to vote and then report back after they had done so. But those are details, not the message.

If you’re a Russian who believes your country should be a part of – rather than an opponent of – Europe and the West, Mr. Putin’s thumping win is meant to tell you that you’re in a tiny minority.

The picture is even more dramatic if you consider that Mr. Putin’s nearest rivals were the Communist Party candidate and an ultranationalist firebrand, who respectively won 12 per cent and 6 per cent. Ninety-five per cent of Russians who voted cast their ballots for politicians who support confrontation with the West.

The message in Russia’s information sphere was that the country has rallied around the 65-year-old Mr. Putin and will support whatever he decides to do next.

“We don’t want to live like you anymore,” Margarita Simonyan, the editor-in-chief of the Kremlin-run RT news channel, wrote on Monday, addressing the West in general via a series of Twitter posts. “For 50 years – secretly and clearly – we wanted to live like you, but we don’t anymore. We don’t respect you anymore.”

Ms. Simonyan said the election result showed that only 5 per cent of Russians opposed what she called the “conservative-patriotic” ideas of Mr. Putin.

Mr. Putin “used to be just our president and he could be changed. And now he’s our leader. We won’t let you change him,” Ms. Simonyan wrote, again addressing the West.

Russia’s dwindling clutch of liberals worry that darker times lie ahead. Ksenia Sobchak, a celebrity journalist who bravely tried to carry the pro-Western standard in the presidential race – finishing fourth among eight candidates with a minuscule 1.7 per cent of the vote – arrived at her campaign headquarters early Monday morning to warn that Russia was heading in a dangerous new direction.

“Now [Mr. Putin] has got the huge legitimacy to do whatever he wants. He can take Russia into any war he wants. We are all hostages of this 75 per cent,” the 36-year-old said, adding that complaining about how Mr. Putin won the race didn’t change the fact that a large majority of Russians clearly support him.

Russia, Ms. Sobchak said, was becoming “like Turkmenistan,” a country built around cultish devotion to the leader. Notably, Turkmenistan – a former Soviet republic in Central Asia that barely changed when the USSR fell – is also a place where presidents rule until they die.

Russia’s constitution limits presidents to two consecutive terms, a rule that Mr. Putin got around once before by swapping jobs with Prime Minister Dmitry Medvedev for four years. Few in Russia expect Mr. Putin to head into retirement in 2024.

Adding to the feeling of defeat, Russia’s liberals are angrily divided over how to proceed from here. Ms. Sobchak announced last week that she was teaming with Dmitry Gudkov – who was the only remaining Putin opponent in the country’s 450-seat parliament until he lost his seat last year – to start a new movement that they hope can resurrect liberal politics in the country by focusing first on the upcoming mayoral elections in Moscow and St. Petersburg.

But the new party looks doomed from the start without the participation of Russia’s most prominent opposition figure, anti-corruption campaigner Alexei Navalny, who acrimoniously fell out with Ms. Sobchak over her decision to run for president.

(Mr. Navalny, who was disqualified from participating in the race because of a criminal conviction that his supporters say was politically motivated, tried to organize an opposition boycott of the election that he says was undermined by Ms. Sobchak’s participation. Sunday’s official turnout rate of 67.5 per cent was actually slightly higher than in 2012.)

Mr. Gudkov said that, without serious opposition, Mr. Putin is currently free to do whatever he chooses. “I expect it will be the same policies: escalation vs. the West, stagnation at home,” he said as the votes were still being counted and Sunday night turned to Monday morning. “Some people expect he will amend the constitution to establish a ‘Putin forever’ model.”

That, the 38-year-old Mr. Gudkov said, was the weakness of the system. Since only Mr. Putin has popular legitimacy, there is no successor in sight and no one has any idea what might come after him.

In 1985, Mikhail Gorbachev suddenly emerged as the leader of the Soviet Union after two elderly predecessors died within 13 months of each other. By 1989, the Berlin Wall had fallen, and in 1991 the Soviet Union fell apart.

“Russia,” Mr. Gudkov said, “is a country where changes can happen dramatically.” 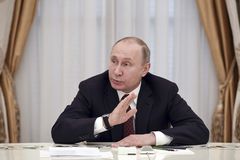 Vladimir Putin strides to victory in Russian election, and to continued conflict with the West
March 19, 2018 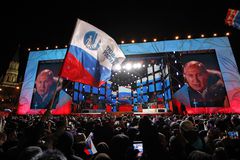