Iran’s top diplomat on Friday accused Western countries of taking advantage of Beirut’s massive explosion last week that killed and injured thousands to dictate their own policies on Lebanon.

The comments by Iran’s Foreign Minister Mohammad Javad Zarif came during a visit to Beirut as a senior U.S. official and France’s defence minister were also in the country. The Aug. 4 blast at Beirut’s port, when thousands of tons of ammonium nitrate ignited setting off a massive explosion, killed nearly 180 people, injured 6,000 and caused widespread damage across the city.

Under pressure, Lebanon’s government resigned earlier this week. For now, there are no formal consultations under way on who will replace Hassan Diab as prime minister and no likely candidate has emerged. But the flurry of diplomatic visits appeared designed to influence the forming of the new government.

Popular anger has swelled over corruption, mismanagement and political uncertainty. Western leaders have said they will send aid directly to the Lebanese people and that billions of dollars will not be pumped into the country before major reforms take place.

After a day of meetings with Lebanese politicians and religious leaders, U.S. Undersecretary of State David Hale said Washington supports efforts to root out corruption, financial and economic reforms and establishing state control over ports and borders.

He urged Lebanese politicians to listen to public calls for change.

“The path forward of course can only be determined by the Lebanese people, " Hale said. “But for the longer run, we can’t accept more empty promises and more dysfunctional governance.”

Washington is ready to support a Lebanese government that “reflects and responds to the will of the people and genuinely commits to and acts for real change,” Hale added.

It remains unclear what role the powerful militant group Hezbollah, which Washington and its allies consider a terrorist organization, will have in the next government. U.S. officials have accused the Iran-backed group of abusing government funds. Local media have speculated that Hale would be pushing for a government that excludes Hezbollah.

French President Emmanuel Macron, who flew to Beirut two days after the explosion, called on Lebanese leaders to establish a “new political order.”

Zarif, in comments Friday, alleged that U.S. attempts to dictate and impose a government that leaves out major Lebanese political factions – a clear reference to Hezbollah – were “inhumane.”

“Lebanon as government and people are the side that decide on this,” Zarif said after meeting with his outgoing Lebanese counterpart Charbel Wehbi. “No foreign side should take advantage of the catastrophic conditions and the needs of Lebanon to impose dictates that are in their interests.”

On Wednesday, Macron said in a call with Iranian President Hassan Rouhani that major regional powers should avoid interfering or escalating tensions in Lebanon as it forms a new government.

Speaking aboard a French military ship in Beirut to help with the aftermath of the blast, visiting French Defence Minister Florence Parly said Friday that she had pressed Lebanese President Michael Aoun on forming a new government quickly and going ahead with reforms.

Aoun said the priority of the new government will be to conduct reforms and fight corruption.

Hale, who arrived on Thursday and toured devastated parts of Beirut, said he was encouraged by the spirit of “unity and collaboration” among the volunteers, saying it could be tapped into not only rebuilding Beirut but also undertaking necessary reforms. He announced the FBI will join Lebanese and other international investigators in the probe of the Beirut explosion.

Zarif said Lebanon should be in charge of the investigation “but other parties can help” and offered Iran’s help, “if asked.” Iran is also ready to help with reconstruction and the crumbling electricity sector, he said.

Survivors and families of victims of the blast called on Friday for an independent international probe as angry Lebanese accuse the political elite of being responsible for the blast.

It is still not known what caused the fire that ignited nearly 3,000 tons of ammonium nitrate in Beirut’s port. But documents have emerged showing the country’s top leadership and security officials were aware of the chemicals stored in the port.

“We lost our homes, our kids, our fathers, our city. We lost everything,” said Sarah Jaafar, a survivor of the blast. “They are all responsible, and they should all pay for what they did.”

The UN humanitarian affairs agency said Friday that 30 people remain missing after the blast, which also damaged six hospitals, and more than 20 clinics in parts of Beirut worst hit by the explosion. Some 120 schools, used by 50,000 students, have been damaged. More than 1,000 of nearly 50,000 residential units were severely damaged, the UN report said.

At least 13 refugees, including two Palestinians, were among those killed and more than 170,000 residents’ apartments were damaged, according to the UN report.

The UN Office for Coordination of Humanitarian Affairs said food shortages are not expected. It said the Beirut port is operating at 30 per cent capacity and the Tripoli port in the country’s north, at 70 per cent. 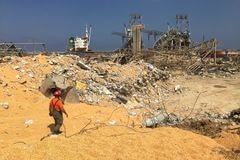 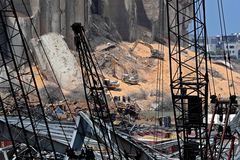 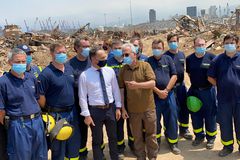