Mike Pence and Kamala Harris will face off Wednesday night in what is expected to be the most consequential vice-presidential debate in recent memory.

U.S. President Donald Trump’s hospitalization this week with COVID-19 has upended the election, casting doubt on the future of the final two presidential debates and raising questions about the fitness of two septuagenarian presidential contenders.

The pandemic has also raised the stakes for Ms. Harris, 55, and Mr. Pence, 61, who will be responsible not only for defending their campaign’s priorities, but for showing voters that they are capable of stepping in to lead the White House if needed.

For Wisconsin’s voters, the path to the polls is an obstacle course

Mr. Pence will have to defend his own leadership of the administration’s coronavirus task force at a time when more than 7.5 million Americans – including the President and several advisers – have tested positive for the virus.

Ms. Harris will face additional scrutiny as the first woman of colour on a presidential ticket. She will have to highlight the Trump administration’s mishandling of the pandemic, while not attacking a President whose health remains in question.

Both will have to find a way to generate fireworks and connect with voters from behind a protective plexiglass wall.

Here are five things to watch for during the debate, which kicks off at 9 p.m. ET.

Mr. Trump’s diagnosis all but assures that his administration’s handling of the pandemic will be front and centre.

Mr. Pence will have to find a way to deflect criticism of the Trump administration’s often conflicted approach to a virus that has killed more than 200,000 Americans while trying to project that the campaign remains on track despite Mr. Trump’s diagnosis.

“Mike Pence will need to argue some sort of 'rally ‘round the President’ ... somehow suggesting Trump will now be even more capable of leading the nation through this pandemic,” said Mitchell McKinney, professor of political communication at the University of Missouri.

Ms. Harris will have to walk a delicate line between highlighting failings of Mr. Trump’s repeated efforts to play down the severity of the virus, while not insulting Mr. Trump for falling ill.

The pandemic has raised questions about whether Mr. Trump, 74, and Joe Biden, 77, may be too old to serve the next four years in office. That has shifted the spotlight onto the vice-presidential nominees.

Debate moderator Susan Page of USA Today is likely to press the nominees on issues about the 25th Amendment to the U.S. Constitution, which lays out the rules for a vice-president to assume control of the White House should something happen to the president, said John Hudak, a senior fellow at the Brookings Institution.

Both candidates will also need to display their leadership skills without appearing to overshadow their presidential running mates. “While vice-presidential candidates almost always wish to project a presidential aura and command at the debate, that approach is paramount Wednesday night,” Mr. Hudak wrote in a recent analysis.

Expectations are low for Mr. Pence, who has spent the past four years in the shadow of a bombastic President. By contrast, expectation are high for Ms. Harris, who has a reputation for grilling Trump administration officials in Senate hearings.

Analysts say Mr. Pence’s skill as a debater is underrated. The former Indiana governor was often described as “calm,” “measured” and “unflappable” during the 2016 debate against Tim Kaine. And Ms. Harris came off as overly scripted in debates during last year’s Democratic primaries.

“Pence’s style is typically a more genial manner in which he usually attempts to divert any attack or question about something the President has said or done,” Prof. McKinney said. “Kamala Harris, on the other hand, will need to be aggressive in her prosecution of the Trump record.”

Either way, expect the debate to be far more civil than the chaotic match-up between Mr. Trump and Mr. Biden last month, said Sam Nelson, who directs the debate program at Cornell University. “It will prove that you can have a clash of ideas and still remain civil to one another,” he said. “I am very optimistic that it will be better – mainly because I don’t know how it can be worse.”

The daughter of immigrant academics from India and Jamaica, Ms. Harris will face pressure to perform as the first racialized woman to run for vice-president.

While Mr. Pence is unlikely to mock and intimidate Ms. Harris in the way that Mr. Trump did to Hillary Clinton in 2016, women still face a double-standard in politics, said Amy Dacey, executive director of the Sine Institute of Policy & Politics at American University.

One significant departure from previous vice-presidential debates is that this one will feature strict physical-distancing precautions.

The candidates will stand more than 12 feet apart. Audience members will be required to keep their masks on during the 90-minute debate. The Commission on Presidential Debates said it would install plexiglass barriers between the candidates and the moderator after the Biden campaign asked for enhanced safety protocols, though Mr. Pence is objecting to the barriers, according to The Washington Post.

The precautions serve as a potent symbol to viewers that the U.S. is still in the midst of a deadly public-health crisis, Ms. Dacey said. “It just reminds people that we’re not out of this. We don’t have answers. [Cases] are going up in various states,” she said. 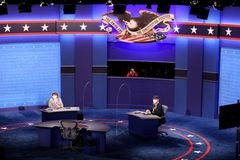 Candidates to be separated by see-through barrier at vice-presidential debate
October 6, 2020 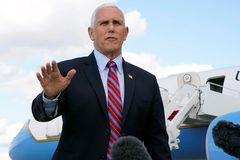 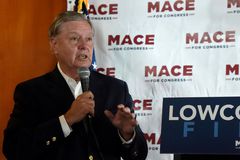