Several times this week, Saudi Arabia and the United States seemed close to a diplomatic solution that would allow the two governments to move beyond Jamal Khashoggi’s disappearance and resume business as usual. Each time, Turkish officials leaked more shocking material to the media, making it impossible for the journalist’s alleged murder to be quietly swept under the rug.

Given that Yeni Safak has a close relationship with Turkish President Tayyip Recep Erdogan’s government, the timing of the leaks – published hours after U.S. Secretary Mike Pompeo concluded a chummy meeting with Saudi Arabia’s Crown Prince Mohammed bin Salman, and just before Mr. Pompeo arrived in Ankara for a meeting with Mr. Erdogan – hardly seemed accidental.

Opinion: The narrative of Jamal Khashoggi’s death has been negotiated. Justice will not be served

“I think the Turks are bargaining with the Saudis and the Americans. As they see their demands not being met, they are leaking more stuff,” said Suat Kiniklioglu, a former Turkish parliamentarian who is now a visiting academic at Oxford University’s Middle East Centre.

He said Turkey – battered by spiralling inflation and a falling currency – could be seeking economic compensation from Saudi Arabia, and perhaps also strategic concessions from one or both of Riyadh and Washington.

Turkey and Saudi Arabia are rivals for influence across the region, and are at odds over the Saudi blockade of Qatar among other issues. And while Turkey and the United States are both members of NATO, the relationship is tense because of American support for Kurdish forces in Syria that Ankara views as “terrorists.”

The grisly claims about Mr. Khashoggi, which Yeni Safak said were based on audio recordings of what happened inside the Saudi consulate on Oct. 2, have not been proven. Saudi Arabia continues to stand by its version that he left its consulate alive and well.

Turkey’s tactic of disseminating a steady flow of headline-grabbing information about the investigation has successfully kept international attention focused on Mr. Khashoggi’s case. Other leaks have included photographs of the 15 Saudi men that Turkey believes were dispatched from Riyadh to carry out the killing, information that allowed journalists to connect some of them to Crown Prince Mohammed’s own personal entourage.

U.S. President Donald Trump told the Fox Business Network on Wednesday that he wanted preserve his country’s relationship with Saudi Arabia, the world’s biggest oil exporter and a key U.S. ally in the Middle East. In separate comments, Mr. Trump said his government had requested whatever audio and video evidence Turkey had of what happened in the consulate, “if it exists.”

The latest revelations seem intended to disrupt any U.S.-Saudi effort to find a quick way out of the crisis. Earlier this week, Mr. Trump suggested – following a phone conversation with Saudi King Salman – that “rogue killers” could have been behind whatever happened to Mr. Khashoggi. U.S. media reported that Saudi Arabia was preparing to admit that Mr. Khashoggi, a Washington Post contributor known for being sharply critical of Crown Prince Mohammed, had died during an interrogation that went wrong.

That story will be tough to sell to an already skeptical international audience, especially after the details published in Yeni Safak, which included quotes – apparently taken from audio recordings obtained by investigators – of what Mohammad al-Otaibi, the Saudi consul-general, reportedly said as the alleged execution took place.

“Do this outside. You’re going to get me in trouble,” the newspaper quoted Mr. al-Otaibi telling the alleged assassins, who began by cutting off Mr. Khashoggi’s fingers. One of the members of the “hit squad” retorted by telling the consul: “Shut up if you want to live when you are back in [Saudi] Arabia.”

Turkish media have reported that Mr. Khashoggi – a Saudi national living in self-imposed exile in the United States who had gone to the consulate seeking papers that would allow him to marry his Turkish fiancée – was drugged during his interrogation, then dismembered while unconscious.

Turkish investigators, who were finally allowed into the consulate on Monday after a 12-day delay, also searched Mr. al-Otaibi’s residence for a second consecutive day on Wednesday.

The reception that Mr. Pompeo received from Mr. Erdogan was noticeably cooler than the warm welcome the U.S. Secretary of State got when in Riyadh 24 hours earlier. Where Mr. Pompeo and Crown Prince Mohammed had smiled and bantered in front of the television cameras, Mr. Pompeo received only a stiff handshake from the Turkish President.

Mr. Trump said on the weekend that there would be “severe punishment” if the Saudi leadership was found to be involved in the alleged murder of Mr. Khashoggi, but has since backed away from that posture, despite bipartisan pressure from Congress to take a tough line. Mr. Trump’s business empire has benefited from millions of dollars of Saudi investment over the years.

“I think the Trump administration would like this to be over with, but I don’t think it will die down soon,” Mr. Kiniklioglu said. 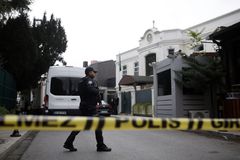 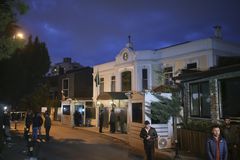