Donald Trump’s admission to hospital for COVID-19 has upended the presidential election, sending both campaigns scrambling to readjust their strategies with less than a month to go before the vote.

Mr. Trump’s diagnosis has thrust the pandemic into the forefront of the election campaign at a time when voters are beginning to cast early ballots. It threatens to undermine Mr. Trump’s efforts to focus the election on the economy and racial-justice protests, even as it forces the Joe Biden campaign to soften its key line of attack: the President’s mishandling of the outbreak.

Trump campaign officials said on the weekend that they would shift into a virtual mode in the next several days before resuming in-person campaign events later in the week. Vice-President Mike Pence is set to take the lead, with a visit to Arizona scheduled for Thursday. Several members of Mr. Trump’s family are also planning to hit the campaign trail in the President’s place.

The Biden campaign said the former vice-president would continue attending in-person events, despite sharing a debate stage with Mr. Trump last week. The Democratic nominee travelled to Michigan on Friday and plans to travel to Florida on Monday.

Mr. Biden will also publicly release the results of all future COVID-19 tests, his campaign said. In addition, the campaign announced it would stop all negative advertising because of Mr. Trump’s diagnosis, though several attack ads continued to run over the weekend.

The vice-presidential debate between Mr. Pence and Democratic nominee Kamala Harris is still scheduled to go ahead Wednesday, though organizers said the candidates would stand 12 feet apart. It was unclear whether future presidential debates – including one set for Oct. 15 in Miami – would proceed.

An outbreak of the virus among several key Trump administration officials and Republican senators who attended a Sept. 26 nomination ceremony for Justice Amy Coney Barrett has also raised questions about Republican plans to confirm her nomination to the Supreme Court before Nov. 3.

Senate Majority Leader Mitch McConnell said he was postponing the chamber’s full return until Oct. 19, two weeks later than originally scheduled. But Mr. McConnell added that he intended to press ahead with Senate judiciary committee confirmation hearings for Justice Barrett, set for a week from Monday, even though two Republican members of the committee, Mike Lee of Utah and Thom Tillis of North Carolina, tested positive for the virus.

“The Senate’s floor schedule will not interrupt the thorough, fair and historically supported confirmation process previously laid out,” he said in a statement.

Mr. Trump’s diagnosis has changed the calculus for both presidential campaigns by reminding voters of his administration’s track record on the pandemic, which has killed more than 200,000 Americans and infected in excess of seven million.

Mr. Trump’s advisers took to television over the weekend to paint a picture of a President who became infected despite taking precautions, and who sacrificed his health for the good of the campaign. “He was unwilling to completely sequester himself, to take no risk – because leaders take risks,” senior Trump campaign adviser Steve Cortes told Fox News on Sunday.

But political analysts questioned how effective that sort of messaging would be, given that Mr. Trump has repeatedly played down the threat of the virus, including mocking Mr. Biden during last week’s presidential debate for wearing a mask.

“Coronavirus is something that Donald Trump was hoping he would not have to talk about during the campaign, because it hasn’t been a strong issue for him,” University of Arizona political scientist Samara Klar said. “But we’re now in a situation where it is literally all everybody is talking about.”

While it makes sense that Mr. Pence would stand in as the lead campaigner, that too could be a risky strategy for Republicans, given that the low-key former Indiana governor may not be nearly as effective at rallying Mr. Trump’s core base of supporters as the President himself.

“The party in many respects has moved to be much more the party of Trump than it was previously,” said Laurel Harbridge-Yong, a political scientist at Northwestern University. “For those who respond to Trump’s style, it’s not clear they would be mobilized in quite the same way by Pence.”

At the same time, the Biden campaign’s decision to pull attack ads robs the Democratic campaign of its key election strategy, Prof. Harbridge-Yong said. “It may help voters [to] not be turned off by the fact that he went after Trump while he was sick,” she said. “But, on the other hand, one of Biden’s strongest selling points for himself is his criticism of how President Trump handled the pandemic.” 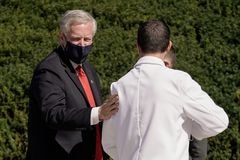 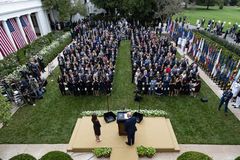 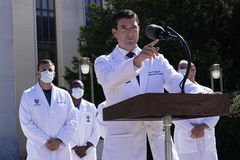 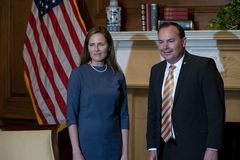