Hundreds of thousands of women across Latin America’s biggest cities flocked to the streets for International Women’s Day on Sunday, with anger over inequality, femicide and strict abortion controls boiling over into sporadic violence.

As Women’s Day events unfolded worldwide, with women donning purple to symbolize feminism, the Latin American marches were set against a backdrop of broader social unrest in the region.

Police said 150,000 protesters gathered in Chile’s capital of Santiago, and another 40,000 marched elsewhere in the country. Many carried signs calling for access to abortion and an end to violence against women. Organizers said the number of protesters was much higher.

“We are a generation of women that has woken up. We are not afraid to speak out and struggle,” protester Valentina Navarro, 21, told Reuters while marching in Santiago. She and a group of friends accompanying her had green bandanas around their necks, a symbol of support for abortion rights.

Incidents of violence were reported as demonstrators confronted police near government offices. Nineteen police were injured, authorities said, and 16 people arrested in the disturbances. Other Chilean cities saw protests as well, with 1,700 police officers deployed nationwide for crowd control.

Broader protests in Chile against social inequality began last October and at their peak included more than 1 million people.

In Mexico’s capital, police and protest groups said up to 80,000 people gathered, including young girls and women in wheelchairs, for a march in which they hoisted signs and shouted chants against femicides, which have more than doubled over the last five years.

Miriam Hernandez, 42, a preschool teacher in Mexico state, wiped away tears as she watched thousands of people fill Mexico’s biggest public square, recalling the recent morning when she was nearly kidnapped while walking to work.

“I fought and fought and then I ran,” she said. “I want more security, I want me and my daughters to always leave the house and know we’re going to return home.”

Groups of women clashed outside Mexico City’s main cathedral with male anti-abortion protesters, some with shaved heads and making Nazi salutes. Women activists threw Molotov cocktails at the doors of the National Palace.

Outside another historic building, protesters in black masks tore down a metal barricade put up to protect a monument, then sprayed the towering statue in pink and purple paint. Elsewhere, protesters overturned a vehicle and sprayed it with graffiti.

Some women said they felt compelled to attend their first march to act as voices for women who have been killed, and because they felt the government didn’t grasp the gravity of the problem.

“The situation has gotten out of control … we have to march for those who no longer can,” said Daniela Molinero, 29, a jewellery shop owner who wore a purple bandana and eye liner.

In Brazil’s São Paulo, about a thousand women turned out, according to police estimates, with many protesting right-wing President Jair Bolsonaro, who came under criticism for comments he made about two female reporters.

Protesters also targeted violence against women in Brazil, where four women were killed a day in 2019, according to the inter-American Commission on Human Rights.

Women’s Day in Argentina lands just over three months into the new administration, which has announced plans to create a minister for women and support a fresh effort to legalize abortion after previous attempts were defeated in Congress.

Women in Buenos Aires planned to hold work stoppages on Monday in support of equal pay and legislation aimed at fighting violence against women and lowering impediments to abortion. 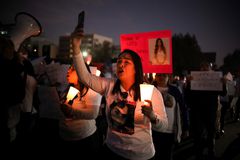