Women’s rights activists furious over a tightening of Poland’s already restrictive abortion law staged protests outside and inside churches on Sunday, disrupting Masses and finding themselves confronted with accusations of “barbaric” behaviour.

At the Holy Cross Church in Warsaw, a group of far-right nationalists blocked stairs leading to the entrance. When one woman managed to push her way through, the nationalists grabbed and threw her on the pavement.

A video posted from the northern Polish city of Szczecinek showed young women surrounding a priest and yelling at him to “Go back to the church” and to “F – off.”

The actions on Sunday follow a ruling on Thursday by Poland’s constitutional court that declared that aborting fetuses with congenital defects is unconstitutional. Poland already had one of Europe’s most restrictive abortion laws, and the ruling will result in a near-complete ban on abortion.

The scene of angry young women entering churches and confronting priests with obscenities signals a dramatic historical change in Poland, where the Roman Catholic Church has been venerated for centuries as the highest authority and where such events would have been unthinkable not so long ago.

The Catholic Church earned respect during the communist era for supporting pro-democracy dissidents in their struggle for freedom, and the late Polish Pope St. John Paul II is held up as a national hero.

But today, Poland’s Catholic Church is often viewed by liberal Poles as a reactionary force standing on the side of the country’s right-wing government.

The events on Sunday marked a further escalation of a cultural war in Poland as women’s and LGBT rights activists have increasingly turned to more radical protest methods after feeling that years of lobbying for greater rights have not brought the desired results.

A young woman in one Warsaw church stood near the altar with a sign that said “Let’s pray for the right to abortion.”

There were also account of churches being spray-painted with slogans and the phone number to an organization that helps Polish women seeking abortions abroad or abortion pills.

Some Poles argued on Twitter that people should not bring politics into churches. Others said that Poland’s powerful Catholic Church was the first side to get involved in politics by pushing for a total abortion ban and supporting the country’s right-wing government and even far-right organizations in some cases.

Do Rzeczy, a right-wing, pro-government news portal, had a headline that read: “Devastated churches, disrupted masses. Scandalous protests by feminists.”

The liberal newspaper Gazeta Wyborcza declared in a headline: “Aggressive reactions of policemen all over Poland … Scenes like those from Belarus on the streets.”

Women’s Strike, the organizer of the protests, argues that forcing women to give birth to fetuses with severe defects will result in unnecessary physical and mental suffering.

The organization vowed more protests in the coming week, including blockades of cities on Monday, a nationwide strike by women on Wednesday and street protests on Friday.

The actions are planned at a time when the Polish government is struggling to contain escalating coronavirus cases and anger over restrictions that are harming the economy.

Last week, the president swore in a new education minister who has said that LGBT people are not equal to “normal people,” has argued in support of corporal punishment and said women’s key purpose in life is to have children.

Health Ministry figures show that 1,110 legal abortions were carried out in Poland in 2019, mostly because of fetal defects. The only other legal cases remaining for abortion are rape or incest or if the pregnancy threatens the woman’s life or health. 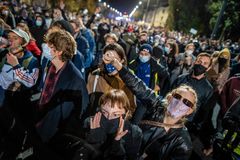 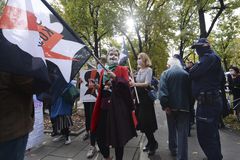