Nearly a quarter of a century after apartheid ended, South Africa remains the most unequal country in the world by any measure, and race is still one of the biggest determinants of income and wealth, a new World Bank study has found.

Inequalities are being passed down from generation to generation, “implying little change in inequality over time and perhaps even a worsening of the situation,” the World Bank reported. “Current levels of inequality are likely to persist in the future.”

Poverty and inequality have both increased in South Africa in recent years, the report said. Poverty rates still follow the old geographic and spatial patterns that were created during the era of white-minority rule, a result of the “enduring legacy of apartheid,” the study found.

The mere fact of being white gives a South African a 69 per cent greater chance of being in the top 60 per cent of incomes, compared to a black person, the World Bank reported.

While the data won’t be surprising to anyone who has witnessed South Africa’s daily reality of township-dwellers in flimsy shacks and white suburban residents in comfortable homes, the study exposes the shocking persistence of apartheid’s economic injustices and the failure of the ruling African National Congress to find ways to reduce the desperate poverty of millions of South Africans.

South Africa is the most industrialized economy in Africa and has one of the biggest economies on the continent, yet it has failed to mobilize resources to tackle the problems of poverty and inequality.

The World Bank report is already triggering promises of action by South Africa’s new president, Cyril Ramaphosa, who replaced Jacob Zuma in February. He pledged that his government will work harder to create jobs and boost investment. “We did have a similar report last year which indicated that the poverty levels have gone up,” he told reporters. “That is a matter of great concern to us.”

While post-apartheid South African governments since 1994 have helped the poor by providing monthly social welfare grants to millions of impoverished families and supplying electricity and sanitation to millions of new homes, the overall poverty rate increased after 2011 under the Zuma government, the study found.

Nearly 80 per cent of South Africans slipped into poverty at least once in the period from 2008 to 2015, the study found.

It found the highest rates of poverty concentrated in regions where former apartheid “homelands” are located. The apartheid regime had a policy of setting aside “homelands” for black South Africans. “Public service delivery and infrastructure was poor in these areas,” the World Bank noted.

The levels of inequality in today’s South Africa are extreme. While the wealthiest 10 per cent of South Africans control 71 per cent of the country’s net wealth, the poorest 60 per cent control only a tiny fraction of the wealth, about 7 per cent, according to the World Bank report.

And while income is highly polarized between rich and poor, as it was during apartheid, the middle class is still relatively small today, compared to other countries with a similar level of economic development. Only about 20 per cent of the population can be considered middle class, the report said.

“The size of the middle class in South Africa is considerably smaller than in other countries. For example, close to 80 per cent of Mauritius’ population could be classified as middle class.”

And then there is a tiny elite at the top of the income chain. “Only 4 per cent of the population can be considered elite, with living standards far above the average,” the World Bank said.

Education and skilled jobs would normally be the way to overcome such inequalities, but this is hampered by the poor state of South Africa’s public education system and the inequality of access to education, the report said.

“Race still affects the ability to find a job, as well as the wages received once employed,” it said. 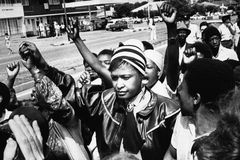 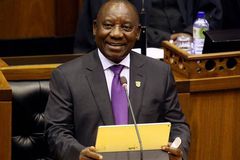