Yemen’s Saudi-backed government and southern separatists are close to a deal that would end a power struggle in the southern port of Aden and see Saudi forces take temporary control of the city, four sources familiar with the negotiations said.

Saudi Arabia, leader of an Arab coalition battling Yemen’s Houthi movement, has been hosting indirect talks for a month between the government of Abd-Rabbu Mansour Hadi and the Southern Transitional Council (STC) to end the standoff that had opened a new front in the multi-faceted war.

STC is part of the Sunni Muslim alliance that intervened in Yemen in March 2015 to restore Hadi’s government after it was ousted from power in the capital, Sanaa, by the Houthis. But the separatists, who seek self-rule in the south, turned on the government in August and seized its interim seat of Aden.

STC forces, which are armed and trained by Riyadh’s main coalition partner, the United Arab Emirates, tried to extend their reach in the south, clashing with government forces in violence that risked further fragmenting Yemen and complicating United Nations peace efforts.

Two Yemeni government officials told Reuters that Riyadh had submitted a proposal to include the STC in Hadi’s government, while Saudi troops would deploy in Aden to oversee formation of a neutral security force in the city.

“There is progress in the Jeddah talks. The conversation is still ongoing and it is about bringing STC into the government, de-escalating tensions and redeployment of forces,” a third source familiar with the talks said on Monday.

The STC’s Security Belt forces tweeted on Monday that an agreement could be signed in the next few days.

The third source said resolving the Aden standoff, which fractured the Western-backed coalition, was needed before the coalition officially responded to a Houthi offer to halt missile and drone attacks on Saudi cities if the alliance halted strikes on Yemen.

The Hadi government’s ambassador in France, Reyad Yassin Abdullah, a former foreign minister, said an accord with the STC was imminent: “We are close to a deal,” he told Reuters in Paris.

He added that coalition forces would be deployed and that the aim was to have an agreement in the next few weeks.

The Iran-aligned Houthi group, which controls Sanaa and most big urban centres, extended the truce offer last month after claiming responsibility for strikes on Saudi oil facilities on Sept. 14 that Riyadh blamed on Iran, a charge Tehran denies.

Riyadh has said it views the truce offer “positively.”

Easing Saudi-Houthi tensions and resolving the Aden crisis would bolster UN efforts to pave the way for political talks to end the war that has killed tens of thousands and pushed millions to the brink of famine.

The British envoy to Yemen, Michael Aron, told Aden TV he was optimistic progress could be made on those two fronts and in implementing trust-building deals agreed between Hadi’s government and the Houthis at UN-led talks last December.

“These three issues together can be a basis for a new peace process which could be successful in coming months, before the end of the year,” Aron said in the Arabic-language interview posted on the British mission’s Twitter account on Monday.

The UAE in June reduced its military involvement in Yemen as Western criticism of the war mounted and as heightened tensions with Iran raised security concerns closer to home, saddling Riyadh with the conflict that is widely seen as a proxy war between Saudi Arabia and Iran.

Abu Dhabi retains influence via Yemeni forces of tens of thousands it helped build to fight the Houthis and Islamist militant groups in Yemen.

Hadi’s government asked Abu Dhabi to stop supporting the STC. The UAE, which distrusts an Islamist party allied to Hadi, criticized his government as “ineffective.”

The Houthis, who say they are fighting a corrupt system, point to Aden as proof that Hadi is unfit to rule. 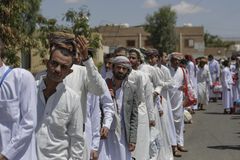