Zeta sped across the Southeast on Thursday, leaving a trail of damage and more than 2.6 million homes and businesses without power in Atlanta and beyond after pounding New Orleans with winds and water that splintered homes and were blamed for at least six deaths.

A Category 2 hurricane when it hit the southeastern Louisiana coast Wednesday, the National Hurricane Center said Zeta weakened to a post-tropical storm by afternoon with maximum sustained winds of 50 mph (85 kph) about 25 miles (45 kilometres) southeast of Charlottesville, Virginia.

The storm was still buffeting North Carolina and southeastern Virginia with gusty winds, but it was moving along at 53 mph (85 km/h), meaning no single place was blasted too long.

Some voting places were affected and hundreds of schools cancelled classes or planned to open late across from the Gulf Coast to the Carolinas. Widespread power outages occurred across seven states from Louisiana to the south Atlantic seaboard. Some places could be in the dark for days.

The latest punch from a record hurricane season left people shaken. Will Arute said it sounded like a bomb went off when part of a large oak snapped outside his home in New Orleans, and crashed into his car and a corner of his home.

“I did not anticipate this to happen. It was pretty intense along the eye wall when it went through here,” he said.

Mackenzie Umanzor didn’t make many preparations because the last hurricane to threaten her home in D’Iberville, Mississippi, a few weeks ago did little damage. Zeta blew open doors she had tried to barricade, leaving her with a cut hand, and the top of her shed came loose.

“You could hear the tin roof waving in the wind. … And there was a couple of snaps, lots of cracks of branches and trees falling,” she said. “It was pretty scary.”

Officials said life-threatening conditions would last into the day, with Zeta crossing the mid-Atlantic states as a tropical storm before moving offshore around Delaware and southern New Jersey.

Louisiana Gov. John Bel Edwards said the most severe destruction – what he described as “catastrophic damage” – appears to be on the barrier island of Grand Isle in Jefferson Parish, where Zeta punched three breaches in the levee, the only levee failure from the storm in the state. Edwards says he ordered the Louisiana National Guard to fly in soldiers to assist with search and rescue efforts, including door-to-door checks on property.

The governor also urged people to be cautious during the recovery.

“Oddly enough, it isn’t the storms that typically produce the most injuries and the fatalities. It’s the cleanup efforts. It’s the use of generators. It’s the carbon monoxide poisoning. It’s the electrocution that comes from power lines. So, now is the time to be very, very cautious out there,” Edwards said Thursday.

Four people died in Alabama and Georgia when trees fell on homes, authorities said. The dead included two people pinned to their bed when a tree crashed through, Gwinnett County fire officials said.

In Mississippi, Leslie Richardson, 58, drowned when he was trapped in rising seawater in Biloxi after taking video of the raging storm, Harrison County Coroner Brian Switzer said. Richardson and another man exited a floating car and desperately clung to a tree before his strength “just gave out,” Switzer said.

A 55-year-old man was electrocuted by a downed power line in New Orleans, a Louisiana coroner said.

Morning rush hour commuters in Atlanta had to dodge downed trees and navigate their way past signals with no power. Trees blocked lanes on two interstates, the Georgia Department of Transportation said.

The storm raged onshore Wednesday afternoon in the small village of Cocodrie, Louisiana, and then moved swiftly across the New Orleans area.

Damage from Zeta extended far inland. More than 80 miles (130 kilometres) north of the coast, Mayor Sheldon Day of Thomasville, Alabama, said hundreds of fallen trees blocked roads and crashed into houses, with canopies at some gas stations blown over.

“At one point, every major thoroughfare was blocked by trees,” Day said. Hundreds of miles away in North Carolina, a highway was blocked by a toppled tree in Winston-Salem and Wake Forest University cancelled classes for the day.

Zeta was the 27th named storm of a historically busy Atlantic hurricane season with more than a month left to go. It set a new record as the 11th named storm to make landfall in the continental U.S. in a single season, well beyond the nine storms that hit in 1916.

Zeta gained strength over the Gulf of Mexico along a path slightly to the east of Hurricane Laura, which was blamed for at least 27 deaths in Louisiana in August, and Hurricane Delta, which exacerbated Laura’s damage in the same area weeks later.

The deteriorating weather prompted early voting sites to close for hours in the western Florida Panhandle, and far fewer voters showed up after the storm than before in Pascagoula, Mississippi, a court clerk said. Power failures delayed voting or left some precincts without power in two Georgia counties, officials said.

“We’re still assessing the situation and obviously some counties will be delaying early voting this morning, but we don’t see that there will be an overall impact on voting,” Georgia Secretary of State Brad Raffensperger said.

Thursday was the last day to request an absentee ballot or vote by absentee in person in Alabama, and power was out in areas including heavily populated Mobile on the coast. Mobile County tweeted that the absentee voting office still would be open and voters, some holding umbrellas, waited outside the county courthouses in Birmingham and Tuscaloosa to cast ballots. 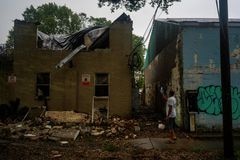