Just hours after the end of a state funeral for the toppled dictator Robert Mugabe, hospital doctors in Zimbabwe learned some disturbing news: the president of their association had disappeared.

The last known words from Peter Magombeyi were received by his colleagues at 10:19 p.m. on Saturday. “Kidnapped by 3 men,” the WhatsApp message said.

It was a reminder of how little has changed in Zimbabwe since the departure of Mr. Mugabe, the long-ruling autocrat who was ousted in a military coup and died in a luxury medical clinic in Singapore on Sept. 6.

Disappearances and kidnappings have been a common weapon of Zimbabwe’s state security agents for many years, during the Mugabe era and more recently under his successor, President Emmerson Mnangagwa, who took power in 2017.

In the past three months alone, two critics of the government were kidnapped and tortured: a well-known comedian and the head of a rural teachers’ union. State security agents were alleged to have conducted both of those kidnappings and the victims were warned to halt their criticism of the government.

Dr. Magombeyi, as with the leader of the teachers’ union, was kidnapped after organizing a strike against the government. Members of the Zimbabwe Hospital Doctors Association have been on strike for nearly two weeks, saying their salaries of less than US$200 a month are inadequate at a time of soaring inflation and food shortages.

The doctors have complained that Zimbabwe’s hospitals have fallen into a state of crisis over the past 20 years. Shortages of staff and medical supplies have become routine, surgery waiting lists can last for several years and operations are often postponed because of a lack of running water or anesthetics.

Proof of the collapse of the heath system, the doctors say, was the decision by Mr. Mugabe and other top politicians to avoid Zimbabwe’s hospitals. For many years, Mr. Mugabe obtained his medical care at the exclusive Gleneagles Hospital in Singapore, where a suite can cost the equivalent of up to US$7,265 a day. He died there at the age of 95 earlier this month.

Another top Zimbabwean leader, Vice-President Constantino Chiwenga, has chosen to seek medical treatment in China, where he has been under care for the past several weeks.

Dozens of hospital doctors gathered on Sunday at a hospital in Zimbabwe’s capital, Harare, to protest the kidnapping of Dr. Magombeyi and to warn that their strike will continue as long as he is not freed. “Abductions will not work,” one of their placards read. “No Dr. Peter, no work,” another said.

Doctors and nurses are planning another protest march in Harare on Monday.

Zimbabwe’s government said it was baffled by the kidnapping. Health Minister Obadiah Moyo, in a statement on Sunday, said he was “alarmed” and had instructed security agencies to “leave no stone unturned” in a search for the kidnapped doctor.

But the doctors said there was little doubt state security agents were involved in the kidnapping. They said Dr. Magombeyi had received a series of threats and warnings in anonymous text messages after he led the strike at hospitals. “Carry on with the way you are acting and you will be abducted,” one message said.

Zimbabwe’s main opposition party, the Movement for Democratic Change, said the kidnapping was a “barbaric” example of how the current government is merely an “amplification” of the former Mugabe government.

Mr. Mugabe, who ruled Zimbabwe for 37 years after leading its struggle for liberation from white minority rule, fell out of the political limelight after the military coup in 2017 and was rarely seen in public. His successor, Mr. Mnangagwa, promised a new era for the country.

But after Mr. Mugabe’s death, Zimbabwe’s state media has swiftly rehabilitated him, describing him as the country’s “founding father.” The government is planning to build a hilltop mausoleum for him at Heroes’ Acre, a national monument, where he is expected to be buried in about a month when the tomb is complete.

At his state funeral on Saturday at a national sports stadium, several African leaders hailed Mr. Mugabe as a hero of the anti-colonial independence movement. But the 60,000-seat stadium was about three-quarters empty. Many Zimbabweans blame Mr. Mugabe for driving the country into economic collapse.

Mugabe to be buried at Zimbabwean national shrine in about 30 days, nephew says
September 13, 2019 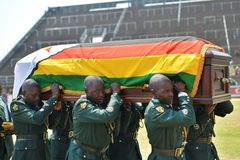 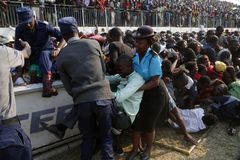 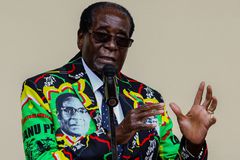