Of all the ironies of the age in the United States, this might be the most bracing: At the very time Americans are celebrating their 18th-century separation from Europe, the continent that their forebears regarded as the centre of colonial tyranny and the home of desiccated monarchies is barring 21st-century American travellers from entering their lands.

The rebellious Americans declared their independence from Britain 244 years ago, in part to prevent further infection from the virus of Old World primogeniture and privilege. The government officials of modern Europe this Independence Day are working to keep Americans away to prevent the spread of the COVID-19 virus that runs almost unrestrained in the United States, setting single-day infection rates all week.

The result is a new front in the 2020 presidential race and a renewal in the debate – sprouting periodically since 1776 – over America’s role in the world. It reignites the perennial dispute whether isolation or engagement best suits a nation whose citizens have roots around the globe but whose interests and inclinations are rooted in their continent-wide country with its huge internal economic market.

The most recent flashpoint was the European Union decision this week to admit travellers from 15 countries, a list that included Canada but pointedly omitted the United States. Last year, according to government figures, Americans made 2,234,425 trips to Europe in July alone. That accounts for about a fifth of American foreign travel and reflects family, business and tourist visits.

Though it is difficult to determine how much a factor the influenza pandemic was in the wartime midterm elections of 1918, then-president Woodrow Wilson’s Democratic Party lost six Senate seats, 24 House seats and 4 gubernatorial chairs. “This could be a powerful opening for Biden,” said Max Skidmore, a University of Missouri-Kansas City political scientist and expert on presidential responses to health threats. “This is not going away but getting worse.”

This fresh angle in the Democrats’ assault on Mr. Trump occurs not only on the week of the American national holiday. It’s also unfolding as the U.S. and its long-time allies are preparing to celebrate the 75th anniversary of the end of Second World War, a period when American engagement in the world helped bring the war to an end, leaving the U.S. as the most powerful nation on Earth and, with the Marshall Plan that was unveiled in 1947, primed to lead rubble-filled Europe back to prosperity.

Now, three-quarters of a century since the end of the 2,194 days of global conflict, the U.S. looks skeptically at the architecture of world economics and power politics that it constructed in 1945. Mr. Trump has questioned the utility of NATO, the effectiveness of the United Nations and the value of the international trading system that Americans established and that in large measure contributed to American economic power in the postwar period.

“The American postwar generation invented a system that, though based on self-interest, was intelligent, giving Europe a new start, binding Europe to the United States and erecting a certain world order,” Jim Cloos, the EU council of ministers’ deputy director-general for institutional policy, said in an interview. “That kind of highly enlightened world leadership from the U.S. is something we would like to see again today.”

But American commitment to that brand of world leadership has crumbled in the Trump years.

‘‘Today the international order is adrift and the ideas the U.S. helped shepherd are being contested not only by other powers but also inside the U.S.,” said Kiron Skinner, former director of policy planning in the State Department in the Trump administration. She said these questions went beyond what she called “the narrative that Trump hates international organizations,” adding, “other countries have similar questions.‘’

Even so, Mr. Biden sees an opening with the EU’s decision. The ruling was grounded in statistics showing the United States had a new infection rate seven times as great as Europe’s. Indeed, new U.S. cases have spiked by 90 per cent in the past fortnight.

“Because Trump can’t do the most basic parts of his job, the United States is now viewed as posing a global health risk,” Mr. Biden told The Washington Post. “Today, America is first in infections, first in deaths, and the EU has decided to bar Americans from traveling there as Europe reopens.”

The presumptive Democratic presidential nominee cited the ironic implications of Mr. Trump’s isolationist instincts: “A President who started his term by writing hateful travel bans is responsible for getting the American people banned from travelling. His presidency is an outrage from start to finish.”

Mr. Trump planned to hold Independence Day events on the South Lawn of the White House in Washington, where a massive July 4 celebration is planned and where 300,000 face masks will be available for a fireworks display that has raised concerns among public health specialists. Last year, Mr. Biden said the President’s extravagant July 4 celebration in the capital was “designed more to stroke his ego than celebrate American ideals.” 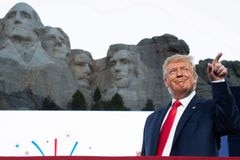 Trump says he thinks ‘masks are good’ after long resisting wearing one in public
July 2, 2020 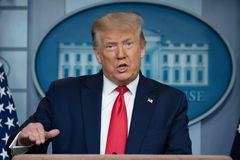 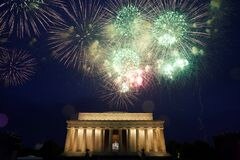