With the word “safety” on every politician’s lips, the “safe” Democratic presidential candidate is weighing ideas that only weeks ago he said were dangerous.

That is how dramatically the novel coronavirus has transformed the American political scene and the 2020 presidential election.

The COVID-19 threat has upended the theory of Joe Biden’s campaign. His team has calculated that his original strategy – presenting a calm, safe alternative to President Donald Trump – would be a dangerous gamble in a country battered by persistent unease and high unemployment.

In short, Mr. Biden has determined that he has to be the “change” candidate in a contest against perhaps the biggest change agent in the history of the presidency. His most recent move was his vow Monday to rescind Mr. Trump’s approval for the Keystone XL Pipeline to carry oil to refineries in Texas from the Alberta tar sands.

The upshot: In recent weeks Mr. Biden has not only overhauled his political profile but also upended the ordinary physics of American politics, where a presidential candidate appeals to the extremes – Democrats to the left, Republicans to the right – to win the party’s nomination, then veers to the centre after becoming the standard-bearer.

Mr. Biden – now cultivating a profile more of insurrection than of restoration – is doing what no presidential candidate of modern times ever has attempted: reversing that pattern by leaning left after running a centrist caucus and primary campaign.

So now the candidate who symbolized the moderate liberalism of the old Democratic Party has chosen Representative Alexandria Ocasio-Cortez – a lawmaker who symbolizes the new, far more leftist Democratic progressivism – as the chair of his environmental-issues committees. This despite the fact that the New York Representative and author of the Green New Deal – which would reorder the economy to battle climate change – is a lightning rod for ridicule from Mr. Trump.

Now the presidential candidate who shunned extending Medicare to everyone supports extending it to more Americans, and has welcomed into his inner circle strong advocates of even broader single-payer health care – despite the risk that the President and Republicans will accuse him of contemplating ‘’socialism.’’

Now the presidential candidate, who was an elder statesman even in 1988 when he and Al Gore competed for the Democratic presidential nomination, has spent considerable time consulting with the former vice-president on climate change – despite the certainty that his general-election rivals will mock Mr. Gore as an environmental radical determined to use global warming as a lever to overhaul the economic system.

And now the presidential candidate whom Senator Elizabeth Warren implicitly accused of favouring incrementalism over innovation is cozying up to and even openly considering the Massachusetts lawmaker as his running mate – despite the threat that Mr. Trump will renew his attacks on her for possessing “a tremendous lack of talent,” and warnings even from Democrats that she is too liberal and too polarizing.

The two former rivals co-wrote an op-ed for the McClatchy newspaper chain that, in a reference to the virus, sounded a lot like a Warren campaign sound bite: “As we recover, we have the opportunity to create an economy that truly works for everyone.”

Mr. Biden’s campaign – no longer seeking a return to traditional liberalism but instead speaking of a comprehensive reshaping of liberalism – is undertaking a gamble like no other in modern presidential politics.

Senator Barry Goldwater’s famous 1964 GOP national-convention exhortation that “extremism in the defence of liberty is no vice [and] moderation in the pursuit of justice is no virtue” was a mere extension of his primary campaign, not a new notion expressed at California’s Cow Palace. Mr. Biden’s August acceptance speech in Wisconsin will likely bear scant resemblance to his February stump speeches in New Hampshire.

Mr. Biden – whose outreach to supporters of Senator Bernie Sanders has continued – may be avoiding the risk of being too innocuous for the current political environment.

But he also is wagering that the country will not resist a candidacy that Republicans are already priming to cast as the most radical since Senator George McGovern in 1972. The GOP described the Democratic nominee as the candidate of “amnesty, abortion and acid.” The South Dakotan won only Massachusetts in Richard Nixon’s landslide.

“For Trump to win, the election has to be a choice for president, not a referendum on his presidency,” GOP pollster Frank Luntz said in an interview, “and Biden is making it easier by drifting to the left."

Mr. Luntz believes Mr. Biden may tack back to the centre in the last 50 days of the campaign. But many Democratic campaign professionals believe the changes that the virus have wrought demand substantial shifts in strategy.

“It’s plenty fine to move this way," said Robert Shrum, who has been a principal adviser in six Democratic presidential campaigns.

“He’s running as a reliable person who can handle the presidency but also bring about fundamental change. He’s no longer talking about going back to Obama-Biden. He’s talking about an ambitious campaign program.” 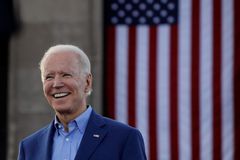 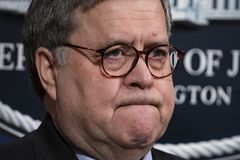