New York is rapidly becoming the new epicentre of the coronavirus pandemic, with the rise of infections accelerating twice as fast as previously predicted in the state and threatening to swamp the centre of global finance even as its hospitals face shortages of critical medical equipment.

The state is the hardest-hit in the U.S., with more than 25,000 cases and 200 deaths, mostly centred on New York City. The rate of infection is doubling every three days.

Governor Andrew Cuomo is warning that the outbreak in the state could reach its peak as soon as two weeks from now rather than the previously projected 45 days – and 26,000 people could die if the federal government doesn’t help him acquire more badly needed ventilators.

But U.S. President Donald Trump – himself a native New Yorker – said that by April 12 he would like to ease off on measures meant to control the virus, in a bid to limit the economic damage from social distancing, and he charged that it was up to Mr. Cuomo to get the equipment he needs.

Mr. Cuomo called on Mr. Trump to use the Defense Production Act to force factories to build ventilators and other equipment, as well as for the federal Department of Health and Human Services to send him the 20,000 ventilators in its stockpile.

The Governor said the state has managed to buy 7,000 ventilators but is still short 30,000 of the machines, and the federal government was giving him just 400 more. He said New York will also need 140,000 hospital beds, up from the roughly 53,000 it now has.

“You pick the 26,000 people who are going to die because you only sent 400 ventilators,” a visibly angry Mr. Cuomo chided Washington. “The President said it’s a war. Well, then, act like it’s a war.”

At a Fox News telephone town hall later in the day, Mr. Trump argued that Mr. Cuomo should have bought ventilators five years ago in anticipation of a potential pandemic.

Mr. Trump doubled down on his call from earlier this week to end coronavirus containment measures as soon as possible, saying he wants the measures done with by Easter, which falls on April 12 this year. Mr. Trump contended that the economic consequences of shutting down much of the country were worse than the deadly ravages of the virus.

“We lose thousands and thousands of people a year to the flu, we don’t turn the country off,” he said. “I would love to have the country opened up and just raring to go by Easter.”

Vice-President Mike Pence said the federal government would send New York 2,000 more ventilators Tuesday and 2,000 on Wednesday from its reserves. But he suggested the Trump administration was still reluctant to use the Defence Production Act because it believed the private sector could provide ventilators without federal intervention. “American industry is stepping forward,” Mr. Pence said on Fox.

The act allows the President to order companies to produce goods needed to fight a war or handle other national emergencies. The companies would be paid for the goods.

The White House and congressional leaders, meanwhile, looked close to a deal on a US$2-trillion economic stimulus package that would include one-time cash payments to Americans and bailout money for companies hurt by the economic shutdown.

Infection rates in the U.S. are currently increasing more quickly than in any other country. Asked if the U.S. might become the pandemic’s new epicentre, WHO spokeswoman Margaret Harris said in Geneva: “We are now seeing a very large acceleration in cases in the U.S., so it does have that potential.”

“Social distancing is really the only cure we have right now,” she said. “The longer we postpone it, the longer we have to do it, the more cases and the more deaths we have to see. How much death do we want to tolerate in this country before we think it’s too much and we have to do more?” 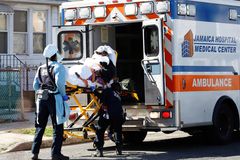 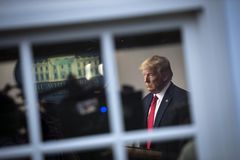 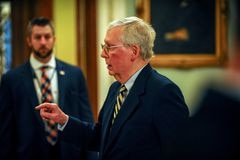