U.S. Attorney-General William Barr is insisting President Donald Trump did not obstruct justice when he tried to thwart the probe into Russian election interference – and even said he will investigate the investigation.

Rather than defuse criticisms that he has run interference for the President, Mr. Barr’s four-hour appearance before a Senate committee Wednesday fanned the flames.

“That’s not a crime,” Mr. Barr said when asked about the President’s efforts to get then-White House counsel Don McGahn to lie about Mr. Trump’s orders to have Mr. Mueller fired. The Attorney-General also asserted that Mr. Trump “fully co-operated” with Mr. Mueller’s probe, even though the President tried to get the previous attorney-general to stop Mr. Mueller from investigating Mr. Trump’s campaign. And when asked about attempts by Mr. Trump’s associates to obtain compromising information on the Democrats from Russian operatives, Mr. Barr said “I’m not sure what you mean.”

Hours after the Senate hearing, Mr. Barr declined to attend a second session before a House of Representatives legislative committee Thursday.

Mr. Mueller gave Mr. Barr his final report on March 22. Two days later, Mr. Barr released a four-page summary that said the President had not colluded with the Kremlin to win the election, and that Mr. Barr also would not charge Mr. Trump with obstruction of justice.

Mr. Barr’s letter did not reveal that Mr. Mueller had uncovered several attempts by the President to fire Mr. Mueller, curb his investigation or ensure that he did not get all the information he needed. Mr. Barr also did not explain why Mr. Mueller had chosen not to make a decision himself on whether Mr. Trump had obstructed justice: Mr. Mueller had concluded that he could not accuse a sitting president of a crime because it would impede his ability to govern, and might also interfere with attempts by Congress to hold the President accountable.

Democrats press on as U.S. Attorney-General Barr refuses to testify at House hearing

At a House hearing last month, Democratic Congressman Charlie Crist cited media reports that Mr. Mueller’s office was frustrated with Mr. Barr’s handling of the report. He asked Mr. Barr if he knew what the reports were referring to.

“No, I don’t,” Mr. Barr replied. Asked at a Senate hearing the following day whether he knew how Mr. Mueller felt about his decision not to charge Mr. Trump, Mr. Barr said “I don’t know.”

But, The Washington Post revealed earlier this week, Mr. Mueller had written to Mr. Barr on March 27 to excoriate his letter to Congress and demand he immediately release more information about what Mr. Mueller’s investigation had found.

“The summary letter … did not fully capture the context, nature and substance of this Office’s work and conclusions,” Mr. Mueller wrote. “There is now public confusion about critical aspects of the results of our investigation.”

On Wednesday, Mr. Barr described Mr. Mueller’s letter as “a bit snitty.” He defended his previous testimony to Congress by arguing that Mr. Mueller didn’t object to the accuracy of Mr. Barr’s letter, but merely that he wanted more details from the report published sooner.

“My understanding was his concern was not the accuracy of the statement of the findings in my letter, but that he wanted more out there to provide additional context,” he said.

“You’ve chosen to be the President’s lawyer and side with him over the interests of the American people,” said Hawaii’s Mazie Hirono, who berated Mr. Barr for several minutes. “You lied to Congress.”

Committee Republicans, meanwhile, criticized the Federal Bureau of Investigation for opening the investigation into potential connections between Mr. Trump’s campaign and the Russians in the first place. They argued that the probe started because of a dossier of unproven accusations about Mr. Trump’s Russian ties, prepared for Hillary Clinton’s campaign by a former British spy.

Mr. Mueller’s report says the investigation began before the dossier, when the FBI discovered that one of Mr. Trump’s advisers knew that Russia had stolen Democratic e-mails.

“Once the Mueller report is put to bed, and it will be soon, this committee is going to look long and hard at how all of this started,” Senator Lindsey Graham, chairman of the judiciary committee, said Wednesday.

Mr. Barr confirmed before the Senate hearing that he would press forward with a probe into how the investigation came about, saying he was “trying to reconstruct exactly what went down.” 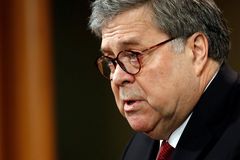 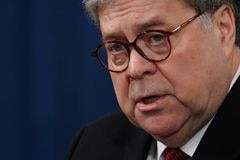 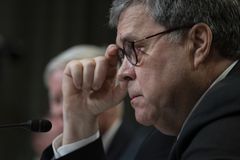