The backing came less than a week after Mr. Sanders ended his presidential campaign, which was centred around progressive policies such as universal health care. There were early signs that some leading progressives weren’t ready to fully follow Mr. Sanders’s lead. And Mr. Trump’s campaign was eager to use the endorsement to tie Mr. Biden more closely to Mr. Sanders, whose identity as a democratic socialist is objectionable to Republicans and some Democrats.

Still, Mr. Sanders’s embrace of Mr. Biden was crucial for someone who is tasked with bridging the Democratic Party’s entrenched ideological divides. Democratic disunity helped contribute to Hillary Clinton’s loss to Mr. Trump in 2016.

Perhaps eager to avoid a repeat of that bruising election year, Mr. Sanders offered his endorsement much earlier in the 2020 campaign. Mr. Sanders backed Ms. Clinton four years ago, but only after the end of a drawn-out nomination fight and a bitter dispute over the Democratic platform that extended to the summer convention.

Mr. Biden and Mr. Sanders differed throughout the primary, particularly over whether a government-run system should replace private health insurance. Mr. Biden has resisted Mr. Sanders’a “Medicare for All” plan and has pushed instead a public option that would operate alongside private coverage.

Mr. Sanders said there’s “no great secret out there that you and I have our differences.”

But Mr. Sanders said the greater priority for Democrats of all political persuasions should be defeating Mr. Trump.

“We’ve got to make Trump a one-term president,” he said. “I will do all that I can to make that happen.”

The coronavirus prevented Mr. Biden and Mr. Sanders from appearing together in person. But they made clear they would continue working together, announcing the formation of six “task forces” made up of representatives from both campaigns to work on policy agreements addressing health care, the economy, education, criminal justice, climate change and immigration.

Mr. Biden, 77, has already made some overtures to progressives by embracing aspects of Mr. Sanders’s and Massachusetts Senator Elizabeth Warren’s policies. The day after Mr. Sanders exited the race, Mr. Biden came out in support of lowering the Medicare eligibility age from 65 to 60, while pledging to cancel student debt for many low- and middle-income borrowers. He’s also previously embraced Ms. Warren’s bankruptcy reform plan.

Mr. Sanders, 78, is sure to remain a force throughout the campaign. When he ended his candidacy, he said he would keep his name on the ballot in states that have not yet voted in order to collect more delegates that could be used to influence the party’s platform. He didn’t say Monday whether he would continue to fight for those delegates.

Still, Mr. Sanders and Mr. Biden emphasized their mutual respect for each other.

Mr. Sanders referred to the former vice-president as “Joe.” Mr. Biden answered him repeatedly as “pal.” The two men asked the other to give regards to their wives, Jill Biden and Jane Sanders.

Mr. Biden told Mr. Sanders: “I really need you, not just to win the campaign but to govern.”

While Mr. Sanders campaigned for Ms. Clinton dozens of times after the 2016 primary, the rapport on display with Mr. Biden on Monday was far lighter than anything voters saw four years ago.

Some progressive leaders were positive but guarded in response to Mr. Sanders’s endorsement.

“Our side will be increasingly energized the more it’s clear that progressive ideas and progressive leaders like Elizabeth Warren, Bernie Sanders, and grassroots organizations have strong positions of influence with Biden,” Mr. Green said.

But others remained skeptical. In an interview with the Associated Press just a few hours before Mr. Sanders’s endorsement, New York Representative Alexandria Ocasio-Cortez criticized Mr. Biden’s overtures to progressives on health care.

“We need a real plan and not just gestures,” said Ms. Ocasio-Cortez, a key Sanders surrogate during his campaign. “What I’d like to see at a bare minimum is a health care plan that helps extend health care to young people.”

Mr. Trump’s campaign, meanwhile, seized on Mr. Sanders’s endorsement to underscore Mr. Biden’s embrace of some of his plans. In a statement, Trump campaign manager Brad Parscale said that “though Bernie Sanders won’t be on the ballot in November, his issues will be.”

“Biden had to adopt most of Bernie’s agenda to be successful in the Democrat primaries,” Mr. Parscale said.

Mr. Sanders could go a long way toward infusing Mr. Biden’s campaign with additional energy if he’s able to bring his enthusiastic following of millions of young and progressive voters along with him to support Mr. Biden. Young voters, a key Democratic voting bloc, have long supported Mr. Sanders over his former primary rivals by huge margins.

Mr. Biden and Sanders on Monday emphasized the need to address the challenges confronting young people during the pandemic, with Mr. Sanders describing “a generation of young people who are experiencing crisis after crisis.” 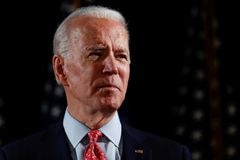 Opinion
Bernie Sanders ends his campaign – just as Americans seem ready to hear him out
April 9, 2020 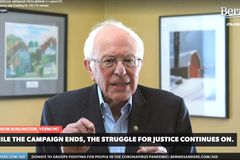