Bernie Sanders is staying in the race for the Democratic presidential nomination despite rapidly diminishing chances of winning, vowing to hold front-runner Joe Biden to account for his lack of progressive policies at their first one-on-one debate this weekend.

Uncertainty loomed, meanwhile, over how the growing new coronavirus pandemic would affect the race. Mr. Sanders, Mr. Biden and U.S. President Donald Trump are all septuagenarians and therefore at increased risk of serious complications if infected.

The day after Mr. Biden defeated Mr. Sanders in four primaries, including in the key swing state of Michigan, the Vermont senator acknowledged that he was “losing the debate over electability” to the former vice-president, but said he was “strongly winning” the battle of ideas because his leftist policies are popular with the Democratic base.

“Last night, obviously, was not a good night for our campaign from a delegate point of view,” Mr. Sanders told reporters in Burlington, Vt., Wednesday afternoon. “Poll after poll, including exit polls, show that a strong majority of the American people support our progressive agenda.”

It was unclear whether Mr. Sanders believed he could still win the nomination, or if he was purely aiming to push the moderate Mr. Biden and the Democratic platform to the left.

Mr. Sanders said he would confront Mr. Biden about comments to MSNBC in which he suggested that he might veto a bill establishing a Medicare-for-All single-payer health-care system if it were passed by Congress.

Mr. Sanders’s campaign suggested he was staying in the race to keep his issues on the agenda rather than because he believed he would win.

“The tougher the primary is for the Democratic nominee, the better, more battle-tested the nominee will be,” tweeted David Sirota, Mr. Sanders’s speechwriter.

Mr. Sanders may be hoping to repeat 2016, when he fought Hillary Clinton to the convention and extracted policy concessions in exchange for his endorsement. But Mr. Sanders this time risks losing influence if his vote totals fall further in subsequent states, and he angers Democrats who would rather he drop out so the party can focus on defeating Mr. Trump

Jim Clyburn, the Democratic whip in the House of Representatives and a supporter of Mr. Biden’s, warned that continuing the race would only weaken the Democrats’ chances of defeating Mr. Trump. Embarrassing Mr. Biden in the debate, for instance, could provide ammunition for the Republicans.

“It is time for us to shut this primary down, it is time for us to cancel the rest of these debates, because you don’t do anything but get yourself in trouble if you continue in this contest when it’s obvious that the numbers will not shake out for you,” Mr. Clyburn warned Mr. Sanders on National Public Radio.

Mr. Sanders would have to score a knockout blow to change the current course of the campaign. He has consistently pulled a lower vote share than in 2016. Of the seven largest states left to vote, Mr. Sanders did not win a single one in the past Democratic election four years ago. Mr. Biden leads polls in all four states that vote next week, including an overwhelming margin in delegate-rich Florida.

Even though Mr. Biden has captured fewer than half the 1,991 delegates needed to win the nomination, current trends would see him easily reach that number over the next few weeks.

While the Vermont senator has consistently won up to 80 per cent of votes from people under the age of 30, turnout from these voters has been low. Mr. Biden, by contrast, has handily won the high-turnout demographic of senior citizens. He has also dominated among African-Americans, the most loyally Democratic demographic, and pulled in suburban swing voters.

Voter turnout was up by 25 per cent in Michigan, benefiting Mr. Biden and bolstering his electability argument. The Democrats must better motivate voters to win back Michigan, a once-blue state that narrowly backed Mr. Trump in 2016.

Mr. Biden, for his part, will have to walk a fine line between holding on to moderate supporters and trying to win over Mr. Sanders’s loyalists, many of whom have vowed not to vote for any other candidate in the general election.

The Sunday debate will be held without an audience to reduce the risk of spreading the coronavirus. That decision followed Mr. Biden and Mr. Sanders cancelling Tuesday rallies in Cleveland after the governor of Ohio called for a moratorium on mass gatherings to guard against the pandemic.

It was unclear, however, whether the candidates would hold off on further events. Mr. Biden has cancelled one Tampa campaign event in favour of a speech on the virus in Delaware Thursday. But his schedule still showed further events in Chicago Friday and Miami Monday.

Ending rallies would be another blow to Mr. Sanders. He has relied on energetic, youth-filled events to generate attention for his campaign.

Mr. Trump, for his part, has evinced indifference about the virus even as the number of cases in the U.S. grew to 1,000.

Earlier this week, he shook hands with a group of well-wishers in Florida. And he plans to attend a “Catholics for Trump” campaign event in Wisconsin next week.

Opinion
There is no conspiracy to stop Bernie Sanders
Subscriber content
March 11, 2020 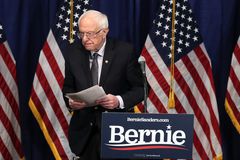 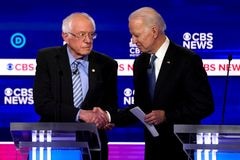 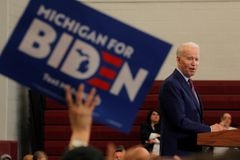