Joe Biden has won four more primaries, including the pivotal swing state of Michigan, putting Bernie Sanders’s campaign on the ropes and continuing a stunning comeback that sets the former vice-president firmly on the path to the Democratic presidential nomination.

Mr. Biden, who just two weeks ago faced the possibility of crashing out of the race, also took Missouri, Mississippi and Idaho, and was effectively tied with Mr. Sanders in Washington State’s early returns Tuesday. Only in North Dakota was the Vermont Senator ahead.

Mr. Biden’s electoral domination Tuesday is certain to increase pressure on Mr. Sanders to quit the contest and form a united front to take on President Donald Trump in November.

The insurgent leftist had hoped to regain momentum in Michigan, a state he captured four years ago in an upset and whose working-class voters are his natural constituency. But he fell far short against the moderate Mr. Biden’s coalition of older, suburban and African-American voters.

Democratic delegate tracker: After Super Tuesday, what lies ahead in the Bernie Sanders vs. Joe Biden battle

Michigan was one of the Rust Belt states that tipped the 2016 election to Mr. Trump, and winning it back is a must for the Democrats in the fall.

Mr. Biden, speaking to supporters near his campaign headquarters in Philadelphia Tuesday, offered Mr. Sanders an olive branch. He promised a “bold, progressive agenda” if elected and borrowed Mr. Sanders’s oft-repeated phrase that health care is a right.

“I want to thank Bernie Sanders and his supporters for their tireless energy and their passion,” he said. “We share a common goal, and together we’ll defeat Donald Trump.”

Mr. Sanders took the unusual decision not to speak on election night. Some of his political allies lamented the result.

“There’s no sugarcoating it: Tonight is a tough night,” Alexandria Ocasio-Cortez, the New York congresswoman who is one of Mr. Sanders’s most prominent campaign surrogates, said in a broadcast on Instagram. “Older voters, which we know are more reliable voters, which we know turn out, have decisively gone to former vice-president Biden.”

Mr. Sanders has consistently dominated among younger voters, sometimes winning 80-per-cent margins among the demographic, but their low turnout figures have made this advantage moot.

With nearly all votes counted, Mr. Biden held a commanding lead of 53 per cent to 37 per cent for Mr. Sanders in Michigan, the most populous state to vote Tuesday, and won Missouri by 25 percentage points, Mississippi by 66 and Idaho by four.

Each candidate had about a third of the vote in Washington State, whose mail-in ballot system meant final results may not be known for several days. Mr. Sanders held a nine-point lead in North Dakota.

These primary results are the first since a clutch of other moderate candidates dropped out of the race over the past two weeks and rallied around Mr. Biden. The entire party establishment has subsequently coalesced around him in a bid to stop the insurgent leftist Mr. Sanders.

Andrew Yang, the entrepreneur who dropped out of the Democratic presidential race last month, became the latest former contender to endorse Mr. Biden, doing so live on a CNN panel as results rolled in.

The race only becomes harder for Mr. Sanders after this: Of the seven remaining major states to vote, he did not win a single one in 2016. Mr. Biden will be looking forward to even larger victories next week when delegate-rich Florida, Illinois and Ohio vote.

Mr. Biden started the race for president nearly a year ago the undisputed front-runner, but saw his support ebb after a string of fumbling debate performances and lacklustre campaigning. Mr. Sanders won the most votes in all three of the first states. But Mr. Biden’s landslide in South Carolina two Saturdays ago started an abrupt turnaround that saw him overtake Mr. Sanders.

Mr. Sanders fought back by going negative. One new ad excoriated Mr. Biden for supporting trade deals such as NAFTA, which Mr. Sanders blames for hollowing out the manufacturing sector in Michigan and other industrial states.

Mr. Sanders was one of only 10 senators to vote against the U.S.-Mexico-Canada Agreement (USMCA), a rejigged version of NAFTA negotiated by the Trump administration. He has vowed if elected to renegotiate it again to add provisions dealing with climate change and strengthen protections against the moving of jobs to Mexico.

Mr. Biden and Mr. Sanders had both planned to rally supporters in Ohio Tuesday evening, but both cancelled after three coronavirus cases in the state prompted the governor to declare a state of emergency. Neither campaign immediately announced any further cancellations over similar concerns.

“All future Bernie 2020 events will be evaluated on a case-by-case basis,” Mike Casca, Mr. Sanders’s communications director, said in a statement. Mr. Biden’s deputy campaign manager, Kate Bedingfield, said the campaign was consulting with public-health officials and would “make announcements about future events in the coming days.”

The next scheduled Democratic presidential debate, on Sunday in Phoenix, will take place without a live audience as a health precaution, organizer CNN announced.

Washington State, where voters fill out ballots at home and either mail or drop them off at polling stations, exhorted people to seal their votes with wet clothes or sponges. “Whether healthy or sick, please don’t lick!” the Washington secretary of state wrote on Twitter. Ballot counters left nothing to chance, and donned gloves Tuesday evening.

Mr. Biden, Mr. Sanders and Mr. Trump are all in their 70s and therefore more likely to have serious complications should they contract the virus. Mr. Sanders also suffered a heart attack last fall. But until now, none had indicated they would cancel campaign events as a result.

Mr. Trump has decided not to get tested for the virus, despite coming into contact with several Republican legislators who have self-quarantined after being in close proximity to an infected man at a conservative conference two weeks ago. On Tuesday, his campaign announced a “Catholics for Trump” event in Milwaukee next week. 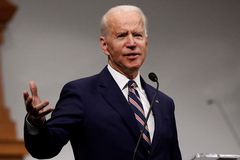 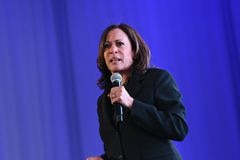 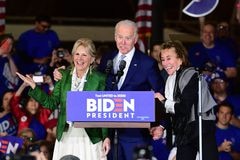