For just a moment – but at a solemn and sombre moment – President Biden Monday evening was transformed into Pastor Biden.

Joe Biden’s term has almost exactly 47 months to go, but his homily marking the 500,000th American death from the coronavirus will almost certainly be remembered as a defining moment in his White House passage – and the moment when he assumed the pastoral role that has been a part of the American presidency for nearly a century.

“That’s more lives lost to this virus than any other nation on Earth,” Mr. Biden said before appearing for a brief candlelight vigil behind the White House with Vice-President Kamala Harris and their two spouses. “But as we acknowledge the scale of this mass death in America, we remember each person and the life they lived.”

In Franklin Roosevelt’s fireside chats during the Great Depression and the Second World War; Ronald Reagan’s remarks after the 1986 explosion of the Challenger space shuttle; Bill Clinton’s address after the 1995 bombing of the federal building in Oklahoma City; George W. Bush’s speech after the 2001 terrorist bombings; and Barack Obama’s sermon at the funeral of the Reverend Clementa Pinckney following the 2015 mass shooting at a South Carolina church, American presidents have spoken the language of consolation and comfort.

Mr. Biden’s remarks, as the early-evening gloam matched the gloom of this tragic milestone – in numbers, the equivalent of the death of the entire population of a city the size of London, Ont. – also marked a turning point in the American presidency, or rather a point of turning back to the modern American political art form of a president in a vicarial tone. His predecessor, Donald J. Trump, minimized the toll of the virus and eschewed the pastoral.

And though Mr. Clinton sometimes was ridiculed by cabaret comedians for his eagerness, as he put it, to “feel your pain,” Americans have come to expect presidential sympathy and empathy.

For many of Mr. Biden’s predecessors, that sense of shared pain was authentic.

Indeed, American presidents have experienced an unusual amount of personal pain, from Theodore Roosevelt’s loss of a wife and mother hours apart on Valentine’s Day 1884 to Calvin Coolidge’s loss of a son to blood poisoning during his presidency; from FDR’s years-long struggle with polio to George H.W. Bush’s loss of his daughter Robin to leukemia at age 3; and from Mr. Clinton’s childhood without a father who died in an auto accident before he was born to Mr. Obama’s struggles as a Black man in America.

But no president – with the possible exception of Abraham Lincoln, who presided over a Civil War death toll more than 100,000 greater than COVID-19′s and who lost an 11-year-old child to typhoid fever during his torturous White House years – has suffered losses more searing than those of Mr. Biden.

Here is an annotated examination of some of Mr. Biden’s remarks from what Theodore Roosevelt called the “bully pulpit” of the American presidency.

This is an allusion to the three deaths that have marked Mr. Biden. The first two – when he was not there – came shortly after he was elected, at age 29, to the Senate, when his first wife, Neilia, and one-year-old daughter, Naomi, perished after the Biden car was hit by a truck on a rural road precisely a week before Christmas 1972. The third – and he was present for this – occurred when his son, Beau Biden, who had been a passenger in Neilia Biden’s car that day, died of a brain tumour at age 46 in 2015.

I know that when you stare at that empty chair around the kitchen table it brings it all back no matter how long ago it happened, as if it just happened that moment.

Mr. Biden has stared at his son’s metaphorical empty chair for more than five years. The death of his son, who was attorney-general of Delaware and a friend of Ms. Harris, was a searing experience for Mr. Biden, who described it in his 2017 book, Promise Me, Dad: A Year of Hope, Hardship and Purpose. Indeed, purpose was one of the themes of Mr. Biden’s remarks Monday:

Mr. Biden’s remarks were issued in an almost whispery tone, with a trace of his childhood stutter, which seemed to be an amulet of authenticity at this occasion:

While we’ve been fighting this pandemic for so long, we have to resist becoming numb to the sorrow. We have to resist viewing each life as a statistic, or a blur, or on the news.

And yet the news carried sobering tidings. An hour earlier, Mr. Biden had ordered the White House flag lowered to half-staff, where it will fly all week. And the peal bells of Washington National Cathedral were tolled 500 times – once for each 1,000 victims of the virus. 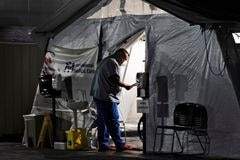