There’s no politics like the politics of a lofty government institution that cultivates a heritage of being above politics.

But the spectacle surrounding the nomination of Judge Brett Kavanaugh for the U.S. Supreme Court is a classic case study of how a judicial body that considers itself a cloistered debating society cannot escape the political winds that blow outside the building that features, just to the left of the entrance of the marble structure, a statue titled Contemplation of Justice.

But there is little that is contemplative about the debate over Judge Kavanaugh’s high-court nomination, and there is much that is instructive about the intrusion of contemporary politics into the confirmation process – a stark symbol of the way politics often intrudes into the meditative study of constitutional imperatives and legal precedents inside the Supreme Court.

Rarely do Supreme Court nominees fail to win confirmation. In fact, it has occurred only four times in the 20th century and seven times in the 19th, although some nominations – George W. Bush’s 2005 selection of Harriet Miers, withdrawn 24 days later, after a storm of criticism from the Republican base – have died before votes in the Senate, the legislative body that alone has the power to approve presidential nominees for the judicial branch through a simple majority.

But with the Kavanaugh confirmation process – already a noisy pageant of political charges, fierce lobby campaigns and passionate protests – roiled by 11th-hour claims that as a 17-year-old high school student he sexually assaulted a young woman, the U.S. capital is convulsed in one of the periodic episodes that seems to capture the zeitgeist of the age.

The judge and his accuser, California research psychologist Christine Blasey Ford, are to be questioned publicly on the alleged episode from their youth – although Dr. Ford has yet to confirm that she will attend. That high-profile session, scheduled for Monday, will occur in a Senate judiciary committee forum that comes amid #MeToo movement revelations involving predatory sexual attacks by powerful men. And it follows days of shouting outside the Supreme Court Building, national media offensives, claims and counterclaims about the future of legal abortion, even fiery cable-television speculation about how the judge might approach questions such as whether President Donald Trump can be sued, or indicted, while in office.

The charges against Judge Kavanaugh – seized upon by otherwise powerless Democrats eager to reject the nomination and condemned by Republicans who spoke of, in the words of the American Conservative Union Foundation, the ‘’disgraceful effort … to impugn his sterling character’’ – are an eerie echo of one of the signature political battles of the late 20th century, the 1991 confirmation of Justice Clarence Thomas. Nominated by President George H.W. Bush to fill the vacancy created by the resignation of Thurgood Marshall, his confirmation nearly was derailed by charges he sexually harassed Anita Hill.

Both the Kavanaugh and Thomas cases underline one of the abiding rules of Supreme Court nominations: The best surprise is no surprise at all.

Once nominated, high-court nominees customarily make pro forma rounds of Senate offices and then retreat beyond public view, to be drilled by tough-minded interrogators preparing them for searing judiciary committee hearings and last-minute vulnerabilities.

‘’You’re never going to know everything about a nominee, but you want to – and you try to,’’ said Thomas Rath, who was a leading member of the effort to prepare David Souter for his 1990 Supreme Court confirmation hearings and for the successful 90-9 vote on the Senate floor. ‘’And now with social media and tweets that appear to be accidental comments or relationships have a potential to be significant.’’

Indeed, for all the mythology that the Supreme Court is a timeless institution insulated from the passions of the times, confirmation battles often reflect the times.

The Kavanaugh nomination reflects the bitter partisanship of the age – and the notion, which occasionally flares in high-court confirmation battles, that political views rather than simply a nominee’s qualifications should be factors that senators should consider.

In modern times, that view helped derail President Lyndon Johnson’s hope in 1968 to elevate Justice Abe Fortas, already on the court, to be the Chief Justice; Republicans and Southern Democrats, concerned about charges of financial irregularities, held the justice accountable for everything they did not like about the court of that era, from its expansion of the rights of criminal defendants to its banning of school prayer. Nineteen years later, Democratic senators Ted Kennedy and Joseph Biden led an effort to defeat president Ronald Reagan’s nomination of Robert Bork to the court. The two lawmakers transformed the nomination into a debate over whether judge Bork was outside the mainstream of both American life and judicial thought.

The Kavanaugh case comes at a particularly fraught time in American political life, with a president facing possible legal action that could prompt a Supreme Court case and with vital midterm congressional elections only seven weeks away – political tests that could determine which party controls Capitol Hill and, pointedly, elections that could turn on the conduct of some of the main actors in the Kavanaugh drama.

Although the current focus on predatory sexual behaviour could have a significant effect on the trajectory of this episode, history is on Judge Kavanaugh’s side. ''In modern times, Supreme Court nominees generally have been confirmed,'' said Stephen Wermiel, a professor at American University Washington College of Law and co-author of the definitive biography of the late Supreme Court Justice William Brennan. ''It’s unusual to have a situation where the nominee doesn’t make it.’’ That is the view that buoys Republicans and haunts Democrats as the Kavanaugh nomination moves to its final, dramatic phase. 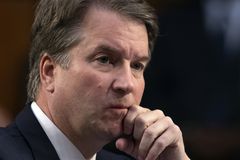 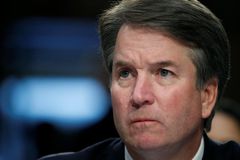 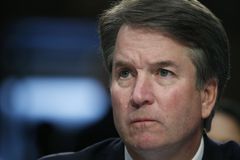