Brian Mulroney didn’t have writer’s block. He simply had too much to say.

“Every time I think of a line to say about George Bush, I realize I have more to say,” the former prime minister said in an interview as he was preparing his eulogy for the 41st president, adding, almost in desperation, “But somehow I have to bring this to an end.”

Mr. Mulroney, who has emerged as something of the eulogist-in-chief for American commanders-in-chief, spoke at the funeral of former President Ronald Reagan in 2004 and then, a dozen years later, at the funeral of Nancy Reagan. On Wednesday, he will have centre stage at the Washington National Cathedral funeral of former president George H.W. Bush, who also selected his son, former president George W. Bush, and former Republican senator Alan Simpson of Wyoming and Bush biographer Jon Meacham as eulogists.

“This is very hard to write,” Mr. Mulroney said. “George Bush was such a big part of my life and an important player in Canada’s life and a model for anyone who wants to serve in public life. It’s hard to piece this together.”

Mr. Mulroney had a close relationship with Mr. Reagan but a far closer one with Mr. Bush, whom he visited repeatedly at the Bush seaside retreat in Kennebunkport, Me., oftentimes using the grey clapboard Walker’s Point home as a base for manic fishing expeditions that sometimes had a madcap aspect – a broken-down boat that required a Coast Guard rescue, for example, and a fish hook planted firmly in the president’s ear, an episode for which Mr. Mulroney did not exactly dispute responsibility.

Just this September, Mr. Mulroney again was in Kennebunkport, this time to receive the George Bush Award for Excellence in Public Service. At that time, Mr. Mulroney knew that the president was mortally ill and indeed had begun preparing the eulogy he will deliver Wednesday. The two had what Mr. Mulroney described as ‘’a very good visit,’’ but, he said, ‘’It was clear it would be my last visit with him – ever.’’

Mr. Mulroney regarded Mr. Bush as a special friend of Canada, and as recently as the Canada 150 commemorations Mr. Bush saluted his northern neighbour as “one of the world’s most respected forces for freedom, human rights, social justice and – as I discovered firsthand as vice-president and then president – stewardship of the environment,” adding, “Your proud nation and wonderful people are in my prayers and those of my family.”

In his eulogy for Mr. Reagan, Mr. Mulroney cited the 40th president’s “unusual alchemy of history and tradition and achievement and inspirational conduct and national pride that defined the special role the president of the United States of America must assume at all times at home and around the world." At Mrs. Reagan’s funeral, Mr. Mulroney recalled a moment during the president’s 1987 visit to Ottawa when the two North American leaders were in an airport hangar and the American First Lady and Mila Mulroney emerged from an automobile, prompting Mr. Reagan to throw his arms around his Canadian colleague’s shoulders and say: “You know, Brian, for two Irishmen we sure married up!”

Both Mackenzie King and Lester Pearson had lived in the United States before becoming prime minister and knew Canada’s neighbour more intimately than most Canadian leaders. “Brian Mulroney, who had not lived in America, surpassed both his predecessors with his instinctive understanding of modern America and her politics in a way Mr. Pearson and Mr. King did not," said Arthur Milnes, the speechwriter who knew both leaders and the editor, with Bush aide James McGrath, of a book, Age of the Offered Hand, that chronicled the relationship between the two men. Mr. Milnes said that Mr. Mulroney “developed the closest personal and political relationship between Canadian and American leaders in history.”

“During these last months the King walked with death as if death were a companion, an acquaintance whom he recognized and did not fear,” Prime Minister Winston Churchill said at the funeral of King George VI in 1952. “In the end death came as a friend, and after a happy day of sunshine and sport, and after ‘good night’ to those who loved him best, he fell asleep as every man or woman who strives to fear God and nothing else in the world may hope to do.”

Earlier this year, Meghan McCain marked the death of her father, GOP Senator John McCain, this way: ‘’He was a great fire who burned bright. In the past few days, my family and I have heard from so many of those Americans who stood in the warmth and light of his fire and found it illuminated what’s best about them. We are grateful to them because they’re grateful to him. A few have resented that fire for the light it cast upon them for the truth it revealed about their character, but my father never cared what they thought and even that small number still have the opportunity as long as they draw breath to live up to the example of John McCain."

In Mr. Mulroney’s case, the Bush eulogy almost certainly will be in part a recitation of the work the two men did together, including efforts to battle acid rain (“I told him this was the litmus test of our relationship,” Mr. Mulroney said) and creating the early architecture of the North American free-trade agreement (“He’s responsible for that”). Mr. Mulroney may also recount how the U.S. president leaned heavily on the Canadian prime minister for advice before Mr. Bush travelled to Malta a few weeks after the 1989 fall of the Berlin Wall to meet Soviet leader Mikhail Gorbachev.

But for all that, the Mulroney eulogy very likely will be deeply personal, perhaps with tales of angling in what is now Nunavut (Mr. Bush actually wrote an account for the local newspaper, circulation 900), perhaps about the time Mr. Mulroney, wearing a bright green sweater, was asked by reporters in Maine what the two leaders would discuss while out on the boat. “Fish,” Mr. Mulroney said.

“If you know George Bush, there are great moments of tenderness in his life,” Mr. Mulroney said. “This is maybe the toughest writing assignment I’ve had to do. There are all kinds of emotions flowing because of the thoughtful nature of George Bush.” 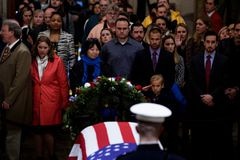 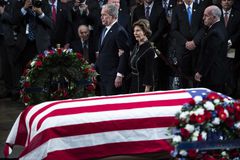 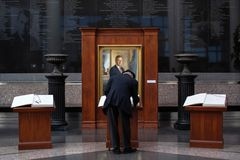