Since losing his bid for a second term, U.S. President Donald Trump – aided by his lawyers, Republican senators and right-wing websites – has spent nearly all of his time pushing sweeping election fraud conspiracy theories.

These false narratives claim a Canadian company that makes vote-counting machines is secretly tied to both late Venezuelan socialist Hugo Chavez and billionaire George Soros, and switched millions of votes for Mr. Trump to president-elect Joe Biden. They say Republican poll watchers were not allowed to observe ballot counting in key states. And they allege that a secret CIA supercomputer changed results electronically.

“A Rigged Election!” Mr. Trump tweeted Friday. “The Election was a HOAX.”

Mr. Trump’s relentless effort to push these conspiracies is raising fears that he is setting the stage for a coup meant to block Mr. Biden from taking office. The President’s allies have floated a plan to have Republican-controlled legislatures in swing states override vote results and appoint pro-Trump electors to the Electoral College. On Friday, the President summoned Michigan state lawmakers to the White House.

Why so many Americans are embracing authoritarianism

Even though it is unlikely that the President will upend the election outcome, his critics warn, he is sowing distrust in American democracy, ensuring that Mr. Biden will inherit a divided and paralyzed country. And Mr. Trump is creating an enormous distraction just as the COVID-19 pandemic accelerates and the U.S. passes a quarter-million deaths.

The sort of conspiracy theories now consuming the country have long been a key ingredient of Mr. Trump’s success. They have helped him deflect blame for disasters such as the pandemic, paint his enemies as inherently evil and tie together his base.

Mr. Trump has embraced conspiracy theories since he launched his political career in 2011 by promoting “birtherism,” the lie that former president Barack Obama was not born in the United States. Since then, he’s pushed a dizzying array of similarly evidence-free narratives, accusing everyone from the country’s intelligence agencies to the Ukrainian government of being out to get him.

On internet message boards and social media, the President’s supporters have crafted conspiracy theories of their own. The most grandiose of these, QAnon, claims that all of the President’s opponents are part of a satanic cult.

On the 2020 campaign trail this summer and fall, the sway these narratives have over Mr. Trump’s base was on full display.

On the sidelines of a Trump rally in North Carolina the month before the vote, Craig Brooksby argued that left-leaning doctors and medical officials were deliberately inflating the country’s COVID-19 death toll to make Mr. Trump look bad.

“The numbers are skewed,” said Mr. Brooksby, a 56-year-old real estate developer. “You get a Democratically controlled hospital or whatever, they’re going to attribute COVID for other deaths.”

At a gathering of Trump supporters on a street corner in the Detroit suburbs, Fred Nienstedt, 63, asserted that Mr. Soros, a liberal Jewish billionaire who is frequently targeted by anti-Semitic vitriol online, “owns the media.”

A common refrain from his supporters was that Mr. Trump is so unfiltered and direct, he must be trustworthy. “He’s an honest man. He tells the truth,” said Wayne Fruchey, a 75-year-old retired welder in Old Forge, Pa. “And if you don’t like it, too bad.”

Jennifer Mercieca, a communication expert at Texas A&M University, said Mr. Trump’s base is prone to believe these theories because of similar messaging in right-wing media since the 1990s. Starting with talk radio, then cable news and the internet, she said, “outrage media” has persistently traded on the idea that there is a plot against conservatives. The volume of disinformation can also disorient people to the point where they give up trying to discern the truth and instead simply choose what they want to believe.

“Generations of people, at this point, have been raised to believe there’s a long-standing conspiracy against the U.S., against right-wing politicians and people in general,” said Prof. Mercieca, author of Demagogue For President: The Rhetorical Genius of Donald Trump.

Since every major American media outlet declared Mr. Biden the election winner two weekends ago, Mr. Trump has made just three public appearances. Instead, he has holed up at an increasingly fortress-like White House, surrounded for several blocks by security fences, and flooded Twitter with claims of “ILLEGAL VOTES.” His campaign, for its part, is bombarding supporters with roughly 15 e-mails every day demanding donations to stop Democrats from trying to “STEAL THE ELECTION!”

At a press conference Thursday, the President’s lawyers described a sprawling conspiracy involving nearly all of Mr. Trump’s enemies, both real and imagined. Sidney Powell claimed Toronto-based Dominion Voting Systems, whose machines counted ballots in 28 states, had stolen millions of Mr. Trump’s votes and was connected to Mr. Soros, the Clinton family, the left-wing Antifa and “communist money” from Venezuela.

So far, claims of voter fraud have proven untrue.

Dominion is not controlled by Mr. Soros and has no ties to Venezuela. It has made political donations to both Democrats and Republicans. And it did not erase Mr. Trump’s votes or switch them to Mr. Biden.

Ms. Powell appeared to conflate Tides Canada, an environmental group that used to be located in the same office building as Dominion, with the Tides Foundation, an unaffiliated U.S. organization that has received donations from Mr. Soros’s charitable foundation. She also conflated Dominion with Smartmatic, a completely different vote-counting technology company whose parent company’s board is chaired by Mark Malloch-Brown, an associate of Mr. Soros.

In one Michigan county that mistakenly counted several thousand Republican votes as being votes for the Democrats, the problem was with a sloppy elections official and not Dominion’s machines. In one Georgia county, results were delayed after a software glitch. In both cases, the errors were quickly caught and rectified.

In Pennsylvania, meanwhile, Mr. Trump’s own legal team admitted its accusations of poll watchers not being allowed to watch is false. In one court hearing, under questioning from a judge, one of Mr. Trump’s lawyers conceded there was a “non-zero number” of Republican officials in the vote-counting room.

The Cybersecurity and Infrastructure Security Agency, a Trump administration office that has the task of protecting election integrity, has repeatedly debunked “Hammer and Scorecard,” a particularly outlandish conspiracy theory that a special CIA supercomputer manipulated the election results. Mr. Trump retaliated this week by firing CISA’s director.

The President has also worked to install his loyalists at the Pentagon, the Federal Elections Commission, the Federal Reserve Board and the civil service since his election loss. And some of his allies have openly discussed hijacking the Electoral College

Such a strategy is a long shot. Democratic governors in Pennsylvania, Michigan and Wisconsin would veto any such moves. And they would also be challenged in the courts, which have so far almost uniformly ruled against Mr. Trump.

But that the President could even consider the idea, experts say, shows the raw power that his disinformation campaign has had. It is so unprecedented in the U.S.’s modern history that they have had to look to autocrats such as Russia’s Vladimir Putin to find parallels.

“Trump is following the authoritarian playbook,” said Ruth Ben-Ghiat, author of Strongmen: From Mussolini to the Present. “He’s been enormously successful in this discrediting of reality.” 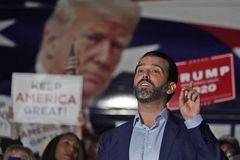 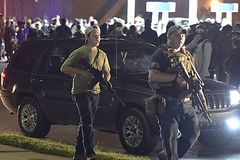 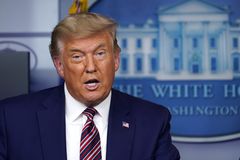