Democrats on Thursday pressed their case at U.S. President Donald Trump’s Senate trial for removing him from office by using the words of his own allies against him to make the point that his actions constituted impeachable offences, but his fellow Republicans showed no signs of turning against him.

The Democratic House of Representatives lawmakers serving as prosecutors in the trial presented the second of their three days of opening arguments as they appealed to senators to convict him on two charges – abuse of power and obstruction of Congress – passed by the House last month.

The U.S. Constitution sets out the impeachment process for removing a president who commits “high crimes and misdemeanours.” Mr. Trump’s legal team has argued that the House charges were invalid because impeachable offences must represent a specific violation of criminal law.

“Impeachment is not a punishment for crimes,” Democratic Representative Jerrold Nadler told the assembled senators. “Impeachment exists to address threats to the political system, applies only to political officials and responds not by imprisonment or fines, but only by stripping political power.”

Mr. Nadler played a video clip of one of Mr. Trump’s most prominent defenders, Republican Senator Lindsey Graham, arguing during the 1999 impeachment trial of then president Bill Clinton that presidents could be impeached even if the conduct in question was not a statutory criminal violation.

Mr. Nadler also played a 1998 video clip of Alan Dershowitz, a member of Mr. Trump’s legal team, recognizing abuse of power as impeachable, and cited a memo written by Attorney-General William Barr, a Trump appointee, that made the same point.

Mr. Trump’s legal team has stated that abuse of power is a “made-up theory” for an impeachable offence “that would permanently weaken the presidency by effectively permitting impeachments based merely on policy disagreements.”

Mr. Dershowitz said in the clip that abuse of power “certainly doesn’t have to be a crime. If you have somebody who completely corrupts the office of the president and who abuses trust and who poses great danger to our liberty, you don’t need a technical crime.”

“As our recital of the facts indicated, the articles are overwhelmingly supported by the evidence amassed by the House, notwithstanding the President’s complete stonewalling, his attempt to block all witnesses and all documents from the United States Congress,” Mr. Nadler said.

The charges against Mr. Trump arise from his request last year that Ukraine investigate Democratic rival Joe Biden, along with the President’s actions to impede a House inquiry into the matter.

“His conduct is not America first. It is Donald Trump first,” Mr. Nadler said.

Mr. Trump is almost certain to be acquitted by the 100-member Senate, which has 53 Republican members. A two-thirds majority is needed to remove him from office.

While it remains a long shot for Democrats to secure the President’s removal, the trial presents them a venue to inflict political damage on him ahead of the November election, with millions of Americans watching the televised proceedings.

Before Thursday’s arguments began, some Republican senators said they had heard nothing new in the presentation made by the Democratic managers and already have decided to vote for acquittal.

Republican Thom Tillis, too, said he has already made up his mind to vote for acquittal. Referring to the Democrats’ presentation, Mr. Tillis told reporters, “It reminds of the shopping channel, the hits of the eighties, you hear it again and again and again and again. I can almost recite the testimony.”

Republican Mike Braun said he would vote for acquittal if nothing new emerged Thursday or Friday.

Other Republicans were more circumspect. Senator Mitt Romney said, “Sorry, but I’m not going to be commenting on the evidence or process until the entire trial is over.”

The top Senate Democrat, Chuck Schumer, called the arguments presented by the Democratic prosecutors “powerful,” “precise” and “devastating.” Referring to Senate Republicans, Mr. Schumer said, “It may have planted the first seed in their minds that, yes, perhaps the President did something very wrong here.”

Mr. Schumer also made a fresh appeal for Republican senators to join with Democrats in voting to allow witnesses and new evidence to be presented in the trial. Four Republicans would have to join the Democrats in order to win a simple majority vote.

“Republican senators – four of them, it’s in their hands – can make this trial more fair, if they want to,” Mr. Schumer added.

This is only the third impeachment trial in U.S. history. It began in earnest on Tuesday and Democrats started their opening arguments on Wednesday. The Senate’s schedule means that Mr. Trump’s defence team, a group of White House lawyers and outside counsel who will be given three days for rebuttal to the Democrats’ opening arguments, would likely start to present their case on Saturday.

Trump lawyer Jay Sekulow said it was unclear whether the Trump defence would need all three days, suggesting it could last as little as six hours. 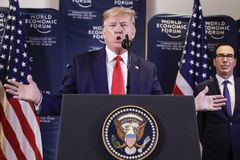 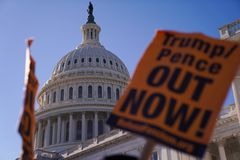 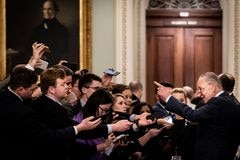