Donald Trump has been admitted to hospital with COVID-19, just 32 days before an election defined by the pandemic and after the President has repeatedly played down the virus’s dangers.

The novel coronavirus reached into the heart of the White House Friday, infecting not only the President but several people in his orbit – most of whom had attended a crowded Rose Garden event last Saturday. At that ceremony, Mr. Trump introduced Supreme Court nominee Amy Coney Barrett. Attendees mostly did not wear masks or physically distance.

Mr. Trump was suffering “fatigue,” the White House said in a statement. He was taken by helicopter to Walter Reed, a military hospital near Washington, shortly before 6:30 p.m. The President is expected to work from the facility “for the next few days” so that he can be quickly treated if his condition deteriorates.

The President was injected with an antibody cocktail and the antiviral drug Remdesivir, both experimental treatments. His doctor, Sean Conley, said he did not need any supplemental oxygen. At age 74 and obese, Mr. Trump is in a high-risk group for serious complications from the infection. Ms. Trump, 50, has only a “mild cough and headache.”

“I think I’m doing very well, but we’re going to make sure that things work out,” a subdued Mr. Trump said in a video filmed in the White House before his departure, after uncharacteristically not tweeting all day. He wore a black face mask as he left for the hospital, one of the few occasions on which he has worn one publicly.

The diagnosis could upend the presidential race a little more than a month before the Nov. 3 vote. Mr. Trump has insisted on continuing to hold large rallies as the centrepiece of his campaign, and spent part of Tuesday’s presidential debate mocking Democratic rival Joe Biden for wearing a mask.

And it raises questions about the stability of the U.S. government at a time when the country is still suffering up to 1,000 deaths a day from the coronavirus. Mr. Trump’s handling of the pandemic – which has killed 213,000 Americans and infected 7.5 million, more than in any other country in the world – is a central issue in the election. The President has persistently tried to argue that the outbreak is almost over.

In his own words: Trump and the coronavirus

In the event that the President becomes incapacitated, he could transfer power to Vice-President Mike Pence until he recovers, under the provisions of the 25th Amendment to the U.S. Constitution. If Mr. Trump is unable or unwilling to authorize the transfer, Mr. Pence and at least eight cabinet members would have to agree to take power away from Mr. Trump. Mr. Pence’s office said he had tested negative Friday morning and would not be quarantining because he had not had close contact with anyone who has tested positive.

If Mr. Trump were to die or quit the race before the election, the Republican Party would choose a different candidate to take his place. According to the party’s rules, the candidate would be chosen by the 168-member Republican National Committee.

The Trumps were tested after Ms. Hicks, a close aide, tested positive Thursday. Shortly before 1 a.m. Friday, Mr. Trump tweeted the news that he was also positive.

At the White House, Mark Meadows, Mr. Trump’s chief of staff, told reporters that the President’s aides found out about Ms. Hicks’s positive test shortly before Mr. Trump left for a fundraiser at his New Jersey golf course. Despite knowing he might have been exposed to COVID-19, Mr. Trump went ahead with the event.

Ms. Hicks had been in proximity to the President this week, flying with him as he travelled to Tuesday’s debate and a rally in Minnesota Wednesday.

Medical staff from the Cleveland Clinic tried to test everyone in the debate hall beforehand, and also asked audience members to wear masks. But Mr. Trump did not arrive early enough to be tested, moderator Chris Wallace told Fox News on Friday, so organizers operated on an “honour system” that he was not infected. Mr. Trump’s family, including the first lady, also did not wear masks, while Mr. Biden’s guests did. At one point, Cleveland Clinic staff offered Mr. Trump’s family masks, but the family waved them away, Mr. Wallace said.

At the debate, Mr. Trump said his rallies have had “no negative effect” and derided Mr. Biden for eschewing such events in favour of small, physically distanced campaign stops.

“I don’t wear masks like him. Every time you see him, he’s got a mask. He could be speaking 200 feet away from them and he shows up with the biggest mask I’ve ever seen,” Mr. Trump said.

Health officials in some locations where Mr. Trump has held rallies, such as Tulsa, Okla., have reported spikes in coronavirus cases after his events.

Mr. Biden tested negative on Friday. “We have to take this virus seriously,” he said while campaigning in Michigan. “It’s not about being a tough guy. It’s about doing your part.”

The White House has some protocols for keeping the President safe, such as testing people who enter the building. But Mr. Trump has continued to hold regular events with no distancing, including the announcement of Ms. Barrett as his Supreme Court nominee. Chairs were directly next to each other, there was no room for people in the audience to stay two metres apart and very few people wore face coverings.

Video of the event showed Mr. Lee with his mask off hugging several people. Both he and Mr. Tillis are on the committee that will vet Ms. Barrett. They both announced they would quarantine for only 10 days, instead of the usual 14, allowing them to return in time for her confirmation hearings.

Chuck Schumer, the Democratic leader in the Senate, called for the hearings to be postponed. Mr. Trump is determined to get Ms. Barrett on the bench before the election to help buttress his campaign if the court is called on to decide the election.

Mr. Jenkins, the head of Ms. Barrett’s alma mater, was also at the event, as was Ms. Conway. She tweeted Friday that she had a “light cough” but was “feeling fine.”

Democratic House Speaker Nancy Pelosi, who would take power if both Mr. Trump and Mr. Pence were incapacitated, tested negative for COVID-19. She told MSNBC Friday that the President had only himself to blame: “Going into crowds, unmasked and all the rest was sort of a brazen invitation for something like this to happen.”

Opinion
On COVID-19, Donald Trump has been hoist with his own petard
Subscriber content
October 3, 2020 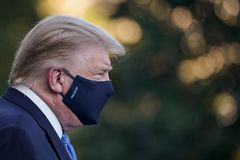 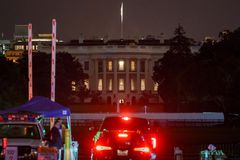 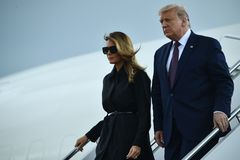