Donald Trump has granted a full pardon to former Canadian media baron Conrad Black, a long-time friend and one-time business partner who has written a biography and numerous columns lauding the U.S. President.

In a statement on Wednesday evening, the White House cited Mr. Black’s former ownership of the British newspaper The Telegraph, as well as his biographies of presidents Franklin Roosevelt and Richard Nixon, as accomplishments that made him worthy of a pardon.

“An entrepreneur and scholar, Lord Black has made tremendous contributions to business, as well as to political and historical thought,” it said.

More than a decade ago, after a criminal investigation that stretched for two years, Mr. Black spent four months on trial in Chicago, where he was defended by Toronto lawyer Edward Greenspan. Mr. Black faced multiple charges, including mail fraud, wire fraud and racketeering stemming from his dealings at Hollinger International Inc. U.S. prosecutors accused Mr. Black and three other Hollinger executives in 2005 of diverting millions of dollars that should have gone to the corporation and its shareholders.

Mr. Black, 74, was found guilty in 2007 on three counts of mail fraud and one for obstruction of justice. Two of the fraud charges were later reversed on appeal. He was originally sentenced to 6½ years in prison, and spent 29 months at a correctional complex in Florida before he was released as he pursued various appeals.

In 2011, Chicago judge Amy St. Eve sent Mr. Black back to prison to complete another 13 months. “I still scratch my head as to why you engaged in this conduct,” she said. “Good luck to you.”

Some of Mr. Black’s convictions, however, were overturned on appeal, save one charge each of fraud and obstruction. He served 3½ years in a Florida prison. He has been living in Toronto since his release in 2012.

In a piece posted Wednesday night on the National Post website, Mr. Black described receiving Mr. Trump’s call informing him of the pardon last Monday. Mr. Black said he had not spoken with Mr. Trump since he took office, and initially assumed the call was a prank by a British tabloid.

Mr. Black said Mr. Trump told him the pardon would “expunge the bad rap you got” and said he wasn’t simply pardoning him because of “any of the supportive things you’ve said and written about me.”

In the piece, Mr. Black maintained that he never did anything wrong, and blamed his conviction on “corporate governance charlatans,” several “grandstanding” judges, and his own defence lawyers, whom he describes as “infirm” and lacking in stamina.

Kenneth Whyte, a friend of Mr. Black’s who was the founding editor of the National Post and a witness for the defence at the trial, commented on the pardon in an e-mail to The Globe. “The man has been through the wringer over the last 15 years ... It’s been a rough ride and I think he’s handled himself very well. He’s never quit working and never quit contributing to society. I’m delighted that this part of his nightmare is over.”

Mr. Trump and Mr. Black have a relationship that dates back decades, and once included a business partnership in the Trump International Hotel and Tower Chicago.

The Trump Hotel Chicago, which rose on the site of the former Sun-Times building during Mr. Black’s ownership of the paper, was initially a joint venture between Mr. Trump and Hollinger, Mr. Black’s former company. Mr. Trump ultimately bought out Hollinger’s stake.

Mr. Black wrote a biography of Mr. Trump last year, subtitled A President Like No Other. He has also written regular columns cheering on the U.S. President. In a piece this week for National Review, Mr. Black compared Mr. Trump favourably with Mr. Nixon.

“Barring something completely unforeseeable, this President will have a stronger argument for re-election next year than any president since Richard Nixon in 1972 after his extraordinarily successful first term,” he wrote.

In the biography, he defended the President from his accusers and compared him to several of his predecessors. “He is not, in fact, a racist, sexist, warmonger, hothead, promoter of violence, or a foreign or domestic economic warrior,” Mr. Black wrote. “Donald Trump accomplished more before he was president than had any prior president of the United States except Washington, Jefferson, Madison, Grant, and Eisenhower. His exterior is uneven, but his history is one of astounding accomplishment.”

Canadian by birth, Mr. Black renounced his citizenship in 2001 to become a British Lord.

At one time, he controlled a large media empire including what is now the Postmedia chain of newspapers in Canada, The Telegraph in London, the Chicago Sun-Times and the Jerusalem Post.

Trump says pardon for Manafort 'not off the table’
November 28, 2018 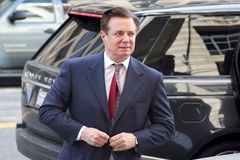 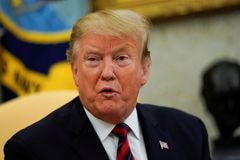 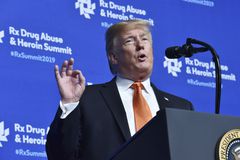 Follow Adrian Morrow and Joe Castaldo on Twitter @adrianmorrow @Joe_Castaldo
Report an error Editorial code of conduct
Due to technical reasons, we have temporarily removed commenting from our articles. We hope to have this fixed soon. Thank you for your patience. If you are looking to give feedback on our new site, please send it along to feedback@globeandmail.com. If you want to write a letter to the editor, please forward to letters@globeandmail.com.
Comments