Dozens of weary Bahamas residents hoping to seek refuge in the United States from the storm-ravaged islands were kicked off a ferry headed for Florida on Sunday night, after an announcement on board that anyone without a valid visa would “have problems” at the American port of entry.

Videos of the incident, which occurred after an apparent failure of communication between the company operating the ferry and U.S. authorities, spread rapidly on social media. Frustrated passengers were lamenting that their hopes of getting away from Hurricane Dorian’s devastation had been suddenly dashed.

“At the last minute like this,” said one passenger, Renard Oliver, who held onto a toddler as he spoke to a reporter with the Miami television station WSVN. “It’s hurtful because I’m watching my daughters cry, but it is what it is.”

U.S. authorities issued conflicting statements about the matter in a space of a few hours on Monday, adding to the confusion and frustration among hurricane survivors.

Initially, Customs and Border Protection officials said that they would have allowed the passengers without visas into the United States as long as they had valid passports, documentation of a clean criminal record and prior approval for entry by the U.S. Embassy in the Bahamas. Later, though, a spokeswoman for the agency said that only travellers arriving by air, not by sea, were eligible to enter without visas.

“You can imagine that any kind of natural disaster like this, where you have this huge disaster, a lot of resources going on, there’s going to be some confusion,” Mark Morgan, the agency’s acting commissioner, told reporters during a briefing at the White House.

But he then appeared to contradict, yet again, the latest official statement from the agency’s communications office, as well as the experience of passengers on the ferry: “We’re not telling the cruise line you cannot allow anyone without documents,” he said. “That’s just not being done.”

Oliver, the passenger interviewed on television, said it was indeed being done. He said that after he boarded the boat, crew members announced over the intercom that U.S. Customs and Border Protection officials had called the boat and said that anyone without a visa had to disembark the ship before it left the Bahamas.

U.S. officials said their procedures for processing Bahamians into the United States had not changed. They said that other cruise lines and airlines that have carried hundreds of people from the Bahamas to safety in the United States since Hurricane Dorian had taken a step that the ferry operators had not: They had contacted the U.S. Embassy before departure to confirm that passengers without visas met the requirements for entry, which include a valid passport and a clean police record obtained within the last six months.

A spokeswoman said the agency had not denied the ferry passengers entry into the United States, but instead had advised that passengers without visas disembark and coordinate with the U.S. Embassy, because without such preclearance, it would have taken hours to process them after arrival in Florida.

“CBP continues to process the arrivals of passengers evacuating from the Bahamas according to established policy and procedures – as demonstrated by the nearly 1,500 Hurricane Dorian survivors who arrived at the Port of Palm Beach, Fla., aboard a cruise ship on Saturday and were processed without incident,” an agency spokeswoman said in a statement.

The statement continued, “CBP relies on the transportation companies in both the air and sea environments to be engaged in ensuring the safety and well-being of any individuals that have been devastated by this tragedy, and that requires transparent communication and planning for adequate resources to receive any arrivals.”

The ferry was operated by the company Balearia, which conducts frequent sailings between Fort Lauderdale, Bimini and Grand Bahama – all popular tourist destinations. Representatives of the company could not be reached for comment, and it was not clear whether or why Sunday’s boarding may have been handled differently from past boardings.

Peter Vazquez, a yacht broker in Fort Lauderdale who has been delivering aid to the Bahamas daily since the storm, said he had been bringing survivors back to South Florida and that they had encountered no problems. The people were not required to have a visa, but they did have to check in and be processed by Customs officials when they landed, he said.

In a statement, Sen. Rick Scott of Florida urged officials from CBP and the Bahamian government to clarify the rules on visas, to waive some visa requirements for those Bahamians who have family in the United States, and to set up a temporary site at U.S. ports of entry to help speed Bahamas residents through immigration clearance.

“As hundreds of thousands of Bahamians seek refuge or start to rebuild after Hurricane Dorian, we cannot have the kind of confusion that occurred last night in Freeport,” he said. 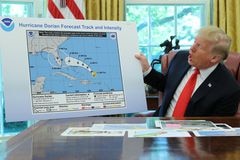 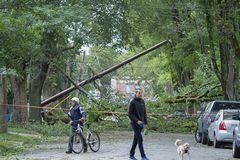 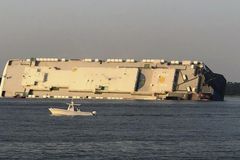