U.S. Senator Elizabeth Warren endorsed former vice-president Joe Biden for president on Wednesday, delivering another high-profile backing from a liberal former rival as he aims to unify the Democratic Party ahead of a bruising contest with Republican President Donald Trump.

The rollouts represent a powerful demonstration of party unity seven months before the Nov. 3 general election. The endorsements have given Biden a series of headlines at a time when his campaign is effectively on hold due to the coronavirus outbreak – and when Trump has captured media attention with his combative White House briefings.

In recent weeks, the more moderate Biden has made overtures to liberal backers of Sanders and Warren. After Sanders’ departure from the race, Biden’s campaign shifted left on two of the Vermont senator’s top priorities, student debt and health care. The two men said during a joint video appearance on Monday that they would create working groups to address major policy areas.

Biden also adopted Warren’s sweeping plan on bankruptcy, a striking move given that the two rivals had clashed for more than a decade over 2005 legislation that Biden, then a U.S. senator, backed making it harder to file for bankruptcy protection.

Biden and Warren have had several calls since she ended her campaign, a source familiar with the discussions told Reuters.

In the video on Wednesday, Warren noted she didn’t agree with Biden all the time but praised his willingness to adapt.

“One thing I appreciate about Joe Biden is he will always tell you where he stands,” she said. “When you disagree – he’ll listen. … And he’s shown throughout this campaign that when you come up with new facts or a good argument, he’s not too afraid – or too proud – to be persuaded.”

Three Democratic U.S. senators from states expected to be crucial in November, Tammy Baldwin of Wisconsin and Debbie Stabenow and Gary Peters of Michigan, also endorsed Biden on Wednesday. Trump narrowly won both states in 2016, the first time either had voted for a Republican in decades.

By contrast, U.S. Representative Alexandria Ocasio-Cortez, a leading progressive from New York who had previously backed Sanders in the 2020 race, said on Wednesday she wanted to see Biden refine his stances on issues including health care and immigration before endorsing him.

Biden’s push to bring the Democratic Party together got a big lift on Tuesday from Obama, who in his video endorsing his former vice-president made sure to reach out to progressives himself.

At one point, Obama adopted Warren’s signature language, calling for real “structural change” in the country and talking about how the U.S. economy is not working for all.

Both Obama and Warren emphasized Biden’s empathy at a time of crisis, seeking to draw a contrast with Trump, whose response to the coronavirus outbreak has been criticized at times as uncaring.

Warren noted Biden’s humble beginnings in Scranton, Pennsylvania, and the “unspeakable tragedy” he faced – a reference to the 1972 car accident that killed his first wife and infant daughter.

“These experiences animate the empathy he extends to Americans who are struggling – no matter what their story,” Warren said. “Empathy matters. And, in this moment of crisis, it’s more important than ever that the next president restores Americans’ faith in good, effective government.”

When she announced the end of her campaign, Warren expressed her disappointment that she was unable to carve out a middle ground between Sanders’ unapologetic democratic socialism and Biden’s moderate positions.

Despite efforts by both camps to secure her backing, she elected not to choose between them, waiting until Sanders ceded the nomination before officially endorsing Biden.

Warren is seen as a possible vice-presidential candidate for Biden, who has promised to select a woman and has said he will consider his former rivals for the nomination. But the ideological gaps between them – her backing of a government-run single-payer health care system, for instance – could prove an obstacle. 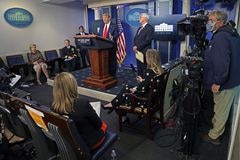 Obama endorses Biden, says he has the experience to guide through ‘one of our darkest times’
Subscriber content
April 14, 2020 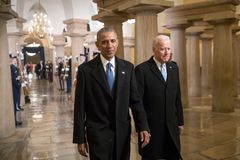 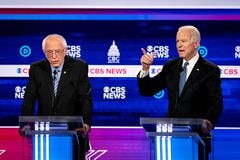